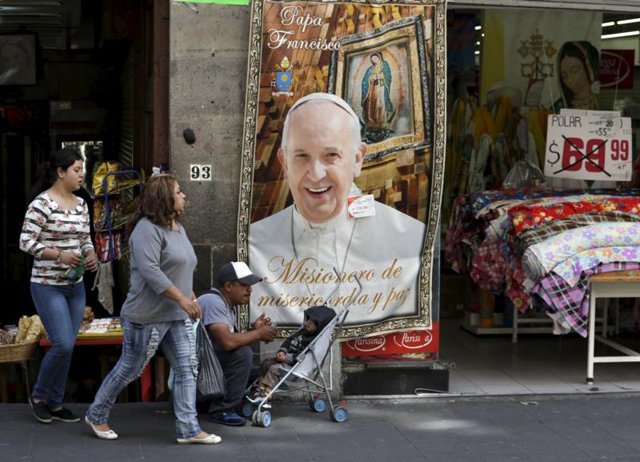 People walks past a Pope Francis banner outside a store in Mexico City Feb. 7.

VATICAN CITY (CNS) — Pope Francis is scheduled to have more than two hours alone with Russian Orthodox Patriarch Kirill of Moscow in Cuba in addition to signing a declaration with the patriarch before flying on to Mexico for a Feb. 12-17 visit.

The Vatican announced the pope-patriarch meeting Feb. 5 and, on Feb. 8, released an updated itinerary for Pope Francis’ trip. The pope will leave Rome almost five hours earlier than originally scheduled so that the meeting in Havana with Patriarch Kirill will not impact his schedule in Mexico.

Jesuit Father Federico Lombardi, Vatican spokesman, told reporters that in addition to official events on the schedule in Mexico, the papal motorcades are expected to be long and lively. For example, he said, the route from the airport to the nunciature in Mexico City, where the pope will sleep, is about 12 miles, and people are expected to line most of the route when he arrives from Cuba.

Five popemobiles will be on hand because papal flights to San Cristobal de Las Casas, Morelia and Ciudad Juarez would make it difficult to move the vehicles efficiently each day. Two of the popemobiles are being shipped down from the United States where they were used in September, the spokesman said.

No evening event is planned for Feb. 13 after Pope Francis’ Mass in the Basilica of Our Lady of Guadalupe, the spokesman said. Instead, the pope will have all the time he wants and needs to pray before the image of Mary preserved there, something the pope said he wanted to do. "He did not want to feel under pressure because of his program," Father Lombardi said.

The trip was designed for the pope and his entourage to return each night to Mexico City and avoid having to sleep in a different city each night, "something which is rather tiring and complicated," the spokesman said.

Another key in the design, he said, was to fulfill Pope Francis’ desire to visit cities and dioceses that did not have a chance to host either St. John Paul II or Pope Benedict XVI.

The pope’s outdoor morning Mass Feb. 14 has been delayed by one hour. The Mass will be celebrated in Ecatepec, a diocese just outside Mexico City; the indigenous name "Ecatepec" means "windy hill" and overnight temperatures are frigid. Father Lombardi said the Mass was delayed until 11:30 a.m. to allow people to arrive in the morning without attempting to spend the night at the site.

A meeting with "representatives of culture" in Mexico City originally scheduled for the evening of Feb. 14 has been canceled, Father Lombardi said, mainly because of the hour delay of the entire day’s program because of the Mass.

Pope Francis has made it a tradition to invite a lay Vatican employee to join his entourage on trips abroad. This time, Father Lombardi said, it will be one of the Vatican firefighters. "Let’s hope he won’t have to work," the spokesman joked.

Here is the updated schedule as released by the Vatican. Times listed are local, with Eastern Standard Time in parenthesis when it is different from local time:

— 4:30 p.m. Signing of a joint declaration. Speeches by patriarch and by pope.

— 2 p.m. Lunch with the papal entourage in the Ecatepec diocesan seminary.

— 1 p.m. (2 p.m.) Lunch with representatives of the indigenous community and the papal entourage.

— 12 p.m. (2 p.m.) Meeting with workers and employers at the Colegio de Bachilleres of the Mexican state of Chihuahua. Speech by pope.