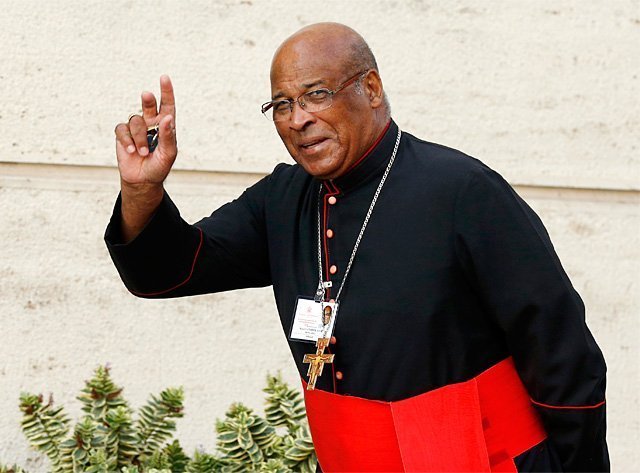 Cardinal Wilfrid F. Napier of Durban, South Africa, arrives for a session of the extraordinary Synod of Bishops on the family at the Vatican in this Oct. 14 file photo.

VATICAN CITY (CNS) — As fresh economic reforms begin to take hold throughout the Vatican, the Council for the Economy has faced some resistance from larger offices that had been used to having greater autonomy, said a cardinal member of the council.

A fairly smooth rollout of more effective and transparent budgeting procedures and accountability throughout the Vatican met with "a hiccup" when some of the larger entities "did not want to come on board" and were more "resistant" to mandated changes, said Cardinal Wilfrid F. Napier of Durban, South Africa.

He said one such office was the Congregation for the Evangelization of Peoples, which oversees the church’s missionary activities. The 400-year-old congregation had its own budget, managed its own investments independent of the Vatican’s main investment program and has its own office complex, located in downtown Rome a mile away from Vatican City.

"But it’s the very big ones we need (to comply) so the little ones have a good example" to follow, he told Catholic News Service Feb. 10 in between meetings in Rome.

Cardinal Napier is one of eight cardinals and seven lay experts that are part of the Council for the Economy — an independent authority Pope Francis established one year ago to devise appropriate policies and best practices for all economic and administrative activities within the Holy See and Vatican City State.

The Secretariat for the Economy, headed by Australian Cardinal George Pell, implements the policies determined by the council and answers directly to the Holy Father. The pope established the council and the secretariat as part of efforts to simplify, consolidate coordinate and oversee management structures throughout the Vatican and to improve the governance, control and reporting of the financial activities of the Vatican’s different offices and bodies.

The Council for the Economy members met at the Vatican Feb. 6 and also reviewed a report from the Institute for the Works of Religion, more commonly called the Vatican bank.

"It was the first time we got a real breakdown of where the IOR is at the moment," Cardinal Napier said, praising the work of the bank’s new president, Jean-Baptiste Douville de Franssu, saying he was doing "a good job."

The meeting also went over "a general report on how the reforms are going on" throughout the Vatican, he said.

Getting individuals and departments used to a new "culture of budgeting and reporting was an issue," he said.

Past practices saw most departments just document what was spent the past year and what they thought would be spent the next "without breaking it down" into itemized expenditures.

Cardinal Napier said that on the whole, most people accepted they needed training in the new standardized practices and the council got "quite a lot of cooperation" from many departments.

However, larger agencies put up the most resistance, he said. "It’s a culture shock to have to report to somebody other than themselves," especially when there had been so much autonomy and little accountability concerning the running of their financial activities.

The cardinal said it is "not surprising to get complaints" about the new procedures, particularly the requirement to account for and have the funding ready for purchases.

Getting used to what are standard practices in most companies requires "a mind shift and a change of heart," he said.

People who have not had to deal with budgeting easily feel "you have to account for every pen you buy" and see some of the requirements as "minutiae" that initially appear absurd.

"But if you consider that this is money that often comes from ordinary people, sometimes poor people, that should be a good enough reason to say how the money is being spent" and that it is spent "according to the rules," he said.

Another speed bump, he said, has been a holdup in the process of getting approval of the statutes for the Council for the Economy and the secretariat. "The process has not been helped by the (Pontifical Council) for the Interpretation of Legislative Texts," he said. That council had been charged with making sure nothing in the text "was in contradiction to the teaching of the church" or the Code of Canon Law, "but they went beyond that competence" and have attempted to rewrite them with other "people trying to push the changes."

It was not yet clear what the next step would be and whether the pope would bypass the legislative council and approve the statutes anyway, he said. The legal or juridical approval that would be needed eventually is really a matter of "reconciling" the statutes, "not undoing it or nullifying it," the cardinal said.

Jesuit Father Federico Lombardi, Vatican spokesman, said Pope Francis discussed the work on the statutes with his nine-member international Council of Cardinals Feb. 10 and will bring it up again with the College of Cardinals when it meets Feb. 12-13.

Cardinal Napier said he was looking forward to the gathering of cardinals at the Vatican to discuss the broader reform of the Roman Curia, and added that this was the time for those who said they wanted change to help make it happen.

"How many times calls for reform of the Curia were made" during the cardinals’ meetings before the conclave that elected Pope Francis in 2013, he said. While "I think that Pope Francis and his team are supported by a majority of the cardinals" when it comes to reform, "those shouting the loudest" for reform before Pope Francis was elected in 2013 do not seem to be as enthusiastic now, he said.

"It’s one thing to say it needs to be done, another to do it," he said.