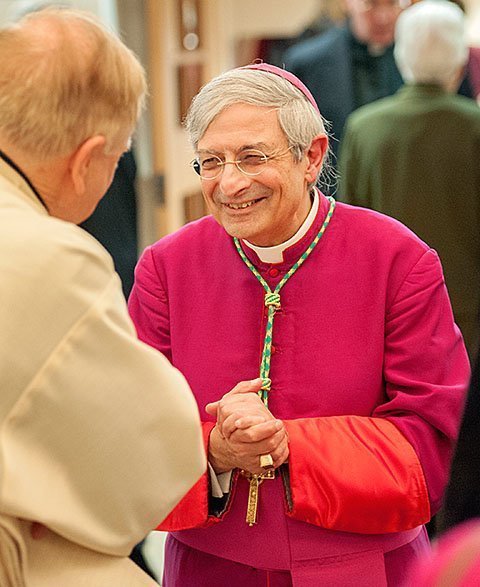 Those who know Bishop Salvatore R. Matano well say he is extremely pastoral, compassionate, down-to-earth and has a robust sense of humor.

This past summer, Richie and Lauren Spitsberg invited Bishop Salvatore R. Matano to their wedding in Bennington, Vt., not expecting that his schedule would allow for the three-hour drive from Burlington. But with the invitation, they also included a letter thanking him for helping them deepen their faith and their love for the church.

Lauren had been confirmed by Bishop Matano shortly after he was installed as Bishop of Burlington in 2005.

"I was blown away by his passion for the church and his approachability," said the now 24-year-old who is working toward her graduate degree in physical therapy.

A few years later, when she was studying at the University of Vermont, their paths crossed again when the bishop would join students at the Catholic Center for Mass or other activities. Bishop Matano recognized her immediately, she recalled.

"He remembered me and my mom and my brother out of hundreds of people at a reception after the confirmation," she remarked.

Bishop Matano often told students how impressed he was with their mastery of the complexities of neurobiology or physics, and he challenged them to study their faith with the same intellectual commitment. Spitsberg took his call to heart.

"I should be at least as curious about my faith as about my academics," she said.

She and Bishop Matano have stayed in touch over the years, and when Lauren’s fiancé moved into a house next door to the Burlington rectory where the bishop lived with three other priests, they would strike up conversations in the parking lot.

"We became friends," she said.

And although Bishop Matano did have a conflict on the day of her wedding, Lauren said he rearranged his schedule so he could attend.

His trip to that wedding is typical of the kindness that those interviewed for this story say they’ve come to expect from their bishop.

He held a number of positions with the Providence Diocese: director of priest personnel, assistant chancellor, and later cochancellor and vicar for administration. From 1980-83, Bishop Matano did graduate studies in Rome, adding a doctorate in canon law to his licentiate in sacred theology. He served two stints as secretary to the Apostolic Nuncio in Washington, D.C. (1991-92 and 2000-05).

Those who know him well say Bishop Matano is brilliant and tireless, but always compassionate and down-to-earth. He is a son of the church, they say, and a man of the people.

For example, when Tropical Storm Irene ravaged parts of Vermont this past summer, Bishop Matano was on the road quickly, praying with and celebrating Eucharist with families who had lost so much.

"We drove three hours to Wilmington," said Msgr. John McDermott, chancellor of the Diocese of Burlington who was recently named apostolic administrator. "And some of the drive was on temporary roads, just dirt and rocks. He wanted people to know the bishop is with them."

Bishop Matano spoke about those visits during a Nov. 6 press conference introducing him as bishop-designate of Rochester.

"As I got to one parish, in Bethel, a pickup truck arrives with a dozen people inside," he recalled. Those worshippers, he said, had started out on foot, making their way along the water’s edge and then gratefully accepting a ride from the truck’s driver, who transported them to Mass. Their faithfulness to the Eucharist touched him deeply, Bishop Matano said.

There was nothing unusual about the bishop making such a trip, Msgr. McDermott said, noting that Bishop Matano has a deep reservoir of affection and compassion for Catholics in the pews.

"No church is too small for him," Msgr. McDermott remarked. "I remember one small church that was literally burned to the ground, and Bishop Matano was there with the people the next morning to pray with them."

"He’s extremely pastoral," noted Msgr. Barry Connerton, who lived with then-Father Matano for many years at St. Augustine’s rectory in Providence. "He still has a room here. He’s at the nursing homes, at the hospitals. I don’t know how he does it."

Even when Bishop Matano served as chancellor of the Providence Diocese, Msgr. Connerton said "he was doing the work of two curates" at the parish.

"He’s very hands on and very orthodox," he said of his friend. "He often answers his own phone and he will be everywhere. Within a year, he will know every parish and every priest."

Msgr. Connerton said Bishop Matano loves his priests and seminarians, as he loves the laity, and he understands the importance of just being present in difficult times.

"He had a priest with a drinking problem (in Burlington)," Msgr. Connerton recalled, "and he offered him rehab. When he was finished (with the treatment), he flew back to Burlington and his plane landed at 1 in the morning. Bishop Matano was waiting for him on the Tarmac."

"When I met Bishop Matano for the first time, I instantly realized this was a man I wanted to emulate," Scott Gratton, 26, a seminarian from Newport Center, Vt., said in an e-mail. "He had a depth to him and a fire about him that you see in all too few people. And although I really had no idea what I was getting myself into, he saw through my ignorance to find something within me that I never even knew I had: a desire to become a saint."

Bishop Matano, Gratton said, "truly sees everyone in this diocese as his sons and daughters. … He forgets about his needs, his fatigue, his desires, and goes out of his way to share in our joys and struggles because he truly loves us; we mean more to him than himself."

Gratton, who is studying at the Pontifical North American College in Rome, said he hopes to model his priesthood on Bishop Matano’s example. The bishop was often the first person to arrive at the Burlington chancery in the morning and the last to leave in the evening. A fellow seminarian, Gratton noted, "worked maintenance in the chancery a few summers ago, and he said every now and then, Bishop Matano would show up after everyone had gone home and pick up a broom to help him clean up the place. He doesn’t feel any job is beneath him; he will do all things and serve all people."

The bishop also cares deeply for children, said Father Daniel White, vice chancellor and moderator of the curia in Burlington under Bishop Matano who also was the bishop’s frequent traveling companion. "Often a parent will come up to him and ask him to pray for their children who don’t go to church. He knows a parent’s pain."

His love for children was clear even during his early years as a priest, said Michael Brown, a former editor of the Providence Visitor (now the Rhode Island Catholic) who first knew Bishop Matano as his algebra teacher at Our Lady of Providence High School in the 1970s.

"I never had a teacher like Father Matano. He was demanding and he was disciplined. He gave more homework than I had in all my other classes combined. It was not unusual to have 50 to 60 problems a night," Brown said. "But he was always ready to help, before school, after school, any student who was struggling. He wanted us to do well. That sense of diligence, that sense of discipline was really wonderful. If you got that in your head as a freshman in high school, it stuck with you for life. I am very grateful."

The bishop still has a special place in his heart for children, said Carrie Wilson, head of school at Bishop John A. Marshall Elementary School in Morrisville, Vt., about an hour’s drive from Burlington. Bishop Matano visited the school on Nov. 1, All Saints Day, as he does every year — just days before his appointment to Rochester was announced.

Starting in September, all 120 students in prekindergarten through eighth grade research the lives of saints, eventually picking one and writing about him or her. On All Saints Day, the students attend Mass dressed as their saint, and Bishop Matano interviews them about their saints, soliciting details of their holy lives.

"Our children really know him as our bishop," Wilson said. "Whenever he visits, he speaks to them in such a genuine and natural way. He jumps into classrooms, going into math classes and talking about quadratic equations, visiting grammar lessons and diagramming sentences with them."

What should Rochester Catholics expect from their new bishop?

Expect a robust sense of humor, said Bishop Emeritus Louis Gelineau of Providence, who took charge of the diocese in 1971, the year Bishop Matano was ordained a priest. "He’s quite short," Bishop Gelineau said of his longtime friend, "and he laughs about it."

At his installation in Burlington, "when they put the miter on his head, Bishop Matano went to the microphone and asked, ‘Do I look taller now?’" he recalled.

But know this, too, Bishop Gelineau said: Bishop Matano is very smart and very dedicated. "When you give him a task that would take most people three or four days, he will probably do it in three or four hours. His work is his prayer."

"He’s a strong leader," noted Bishop Emeritus Daniel Reilly, of Worcester, Mass., also a Providence native who has known Bishop Matano since his seminary days. "He is very energetic. He will be all over the place. He stands up for issues. He will speak out. He’s very much a leader and not afraid. Everything is so secularized. We have to speak out against secular values, and he will. He believes it is very important to give witness to the faith."