Vet who fought in the Battle of the Bulge reflects on WWII, faith - Catholic Courier 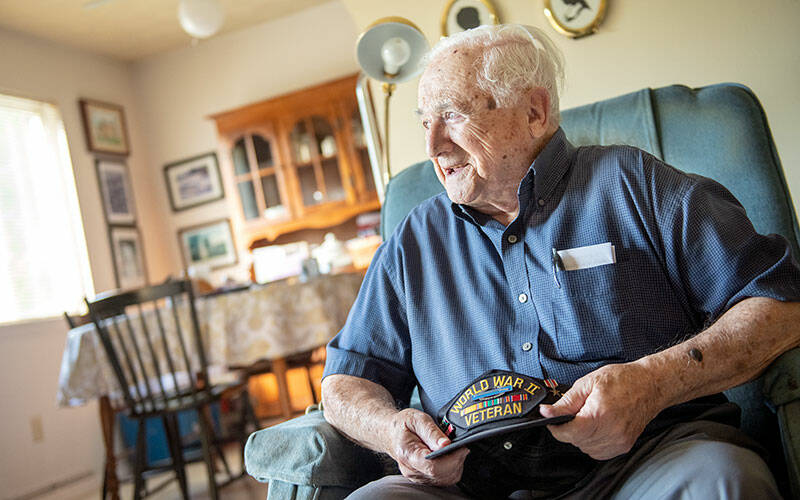 CHARLOTTE — Christmas Eve 1944 will forever stand out in the memory of John “Jack” Foy.

That night, Foy, a machine gunner in the U.S. Army, was traveling north from the Alsace section of France toward the Belgian town of Bastogne with Gen. George S. Patton’s Third Army. He did not know it yet, but he would soon be entrenched in the Battle of the Bulge, one of the major battles of World War II and the German army’s last major offensive on the Western Front.

“We went through Reims in France, and it was probably 1 o’clock or 2 o’clock in the morning, and midnight Mass was just letting out at that huge cathedral in Reims. We’re driving by — I was in a jeep — down that street, and the people were streaming out of the cathedral,” Foy recalled. “It seemed so strange. They’re celebrating the birth of the Prince of Peace, and we’re on our way to kill.”

This memory is one of many that Foy, 96, shares with students when he travels to local schools to talk about his experiences as a veteran of World War II. These presentations, which Foy has been giving for more than 20 years, have been on hiatus since March 2020, when schools closed abruptly due to the COVID-19 pandemic. Schools have reopened, albeit with changed protocols related to school visitors, and Foy hopes to resume these presentations soon.

“Especially at this time when our country is so torn apart, I think it’s very essential for the kids to learn that we can stick together and deal with (challenges),” he said, noting that during World War II, Americans seemed united around the common goal of winning the war. “Our country was just one. … Now it’s so split.”

The veteran, who belongs to Holy Cross Parish in Charlotte, typically devotes half of his presentation to describing an average soldier’s experiences during the war and leaves half of his time open for questions from his audience, which is usually high-school students.

Foy wasn’t much older than those students when he shipped off to Europe as a newly trained infantryman. A self-described “smart kid” in high school, Foy had been accepted into the military’s Army Specialized Training Program at Cornell University. Students in this program at Cornell and universities throughout the nation were on track to earn four-year degrees in such fields as engineering in just two years.

Foy arrived on campus in Ithaca in September 1943 and had completed one year’s worth of engineering courses by December 1943. The ups and downs of the war and the military’s need for more combat troops kept him from completing his engineering training, however.

“At that time, they were losing an awful lot of men, so they decided infantrymen were needed more than engineers, so they pulled us all out,” Foy said. “To get into this program you had to have a very high IQ, and all these guys got pulled out and sent into the front lines of infantry, and thousands and thousands of them got killed.”

Many of the men in Foy’s own company had been in this program as well, he said. Almost half of the initial 200 or so soldiers in his company were killed in action, and most of the rest of them were badly wounded, Foy said.

“They dropped like flies around me. These guys were all brilliant. I’ve often wondered what our country would have been if these guys would have survived,” Foy mused.

After finishing his infantry training, Foy, then 18, was sent to Europe on the Queen Elizabeth, which carried 15,000 soldiers to Glasgow, Scotland.

“We were stacked like sardines,” Foy recalled with a chuckle. “We were young enough to be interested in everything. Everything was new to us. You’re landing in Glasgow and seeing these big castles on the hills and things like that. You’re just fascinated. We didn’t have sense enough yet then to start getting scared of the fighting, but we soon did.”

After landing in Scotland, the soldiers journeyed by land down into southern England before taking smaller boats over to France. By the time Foy’s company arrived outside Bastogne, the novelty of being in a foreign land had been replaced by firsthand knowledge of the horrors of war.

Foy’s faith had been strong before the war. He and his nine siblings all had attended Holy Cross School in Charlotte and his family was active in Holy Cross Parish, where he was an altar server.

Witnessing the fragility of life and the way it could be ended in an instant only strengthened Foy’s Catholic faith, he said.

After returning home in 1946, he married his wife, Rita — a fellow Holy Cross alum — and the couple sent their four children to their alma mater. One of their six grandchildren, Alex DeLucenay, currently is in formation for the permanent diaconate.