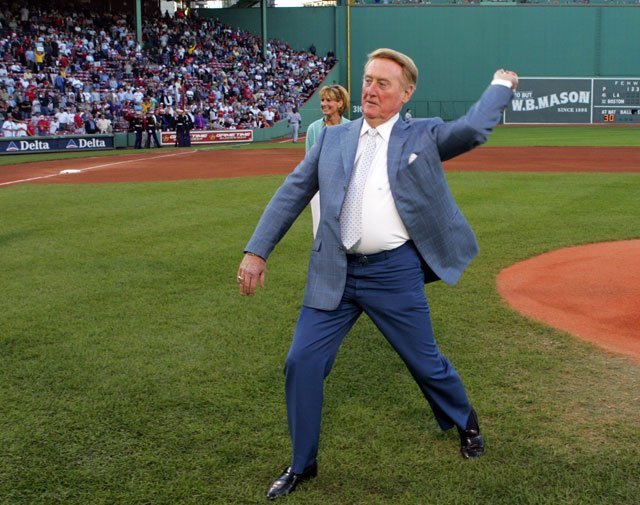 Los Angeles Dodgers Hall of Fame announcer Vin Scully throws out the ceremonial first pitch in early June prior to the first game ever between the Los Angeles Dodgers and the Boston Red Sox at Fenway Park in Boston. Scully will likely retire after the 2016 season, his 67th announcing games for the franchise.

The beloved 87-year-old broadcaster — once voted by fans as the "Most Popular Dodger" of all — said Aug. 28 he will return for one more season, but on Aug. 29 told a news conference at Dodger Stadium that "realistically, next year will be the last one."

"How much longer can you go on fooling people?" smiled Scully, a lifelong Catholic who attended Fordham Preparatory School and Fordham University in New York, and now attends St. Jude the Apostle Church in Westlake Village, California. "So yeah, I would be saying, ‘Dear God, if you give me next year, I’ll hang it up.’"

Scully began broadcasting Dodger baseball in 1950, at age 22, when the Dodgers were in Brooklyn. He became the team’s lead announcer in 1953, and has served in that role ever since. He became an icon after the team moved to Los Angeles in 1958, with many Dodger fans insisting on bringing portable listening devices (starting with transistor radios) to listen to Scully, even though the game was right in front of them.

Because of his advancing age and desire to spend more time with his wife, children and grandchildren, Scully has curtailed his workload in recent years and now only broadcasts Dodger home games and road games in California.

And although he said he will miss the daily contact with his friends at Dodger Stadium and his fellow reporters, he added, "When I leave, I will leave."

He noted that other longtime baseball announcers associated with some of baseball’s most storied franchises — the Yankees’ Mel Allen, the Giants’ Russ Hodges, the Cardinals’ Jack Buck — have come and gone. "And you know what?" he said. "They kept playing the games, and the fans kept coming. So I know I can be replaced."

A multi-award-winner — including National Broadcaster of the Year and Broadcaster of the Century by the American Sportscasters Association — Scully was inducted into the broadcasters’ wing of Baseball’s Hall of Fame in 1982. In 2009, he received the Cardinal’s Award from the Archdiocese of Los Angeles for his service to the local church and community.

"I think about my career," he told The Tidings, newspaper of the archdiocese, in a 2008 interview, "and all I can say is, ‘Thank God who made it all possible.’"

But during the news conference at Dodger Stadium — where the press room was named for him in 2001 — Scully displayed customary humility as he sought to minimize the fuss over his plans to step aside from the broadcast booth.

"When it all boils down, I am the most ordinary man you’ve ever met," he said. "I was given an extraordinary opportunity, and God has blessed me for doing it all these years."