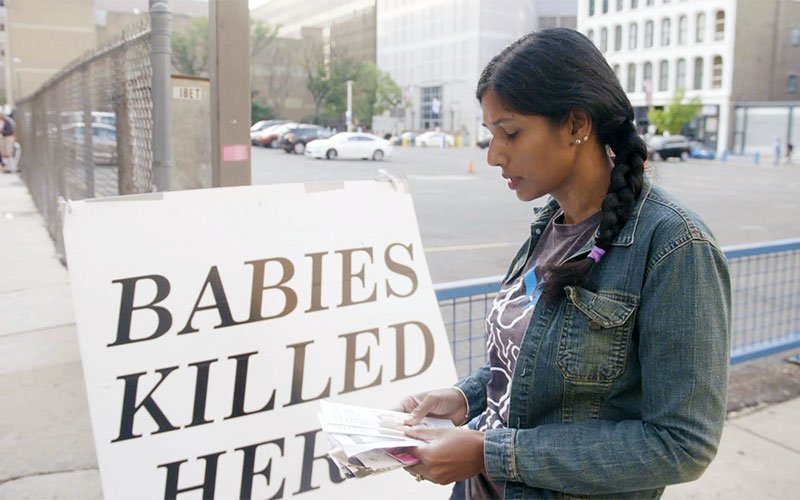 At a Pennsylvania abortion clinic, women face unplanned pregnancies and protesters outside. This is Dr. Monique Ruberu, a pro-life OBGYN. She prays outside the clinic on most Saturdays and considers herself a sidewalk counselor, offering information to women as they enter the clinic for abortion services. (Photo courtesy of Vanessa Carr for Frontline)

A commendable but significantly flawed attempt to portray both sides of that division fairly, the film premieres Tuesday, April 23, 10-11 p.m. EDT. Broadcast times may vary, so viewers should consult local listings.

Obenhaus produces, writes and narrates “The Abortion Divide,” and Elizabeth Leiter produces and directs it. Obenhaus notes in the documentary’s opening that the facility he visited in the Philadelphia suburb of Chester in 1983 has since merged with an inner-city facility known as the Philadelphia Women’s Center, where 6,000 pregnancies are terminated annually.

The 1983 program tracked four women contending with crisis pregnancies — two who had abortions and two who didn’t — while also observing pro-life protesters’ efforts to decry the practice and support unmarried pregnant women who opted to keep their children. One of those pro-life campaigners, Dr. George Isajiw, director of the Catholic Medical Association, is featured in the new documentary as prominently as he was in the earlier work.

Telling the stories of women who wrestle with “urgent and wrenching” decisions about pregnancy and depicting pro-life advocates praying for and counseling women, the show reminds viewers how much, in some respects, remains the same on the abortion front after more than three decades.

But “The Abortion Divide” also highlights the changes that have significantly altered this situation since 1983. Bulletproof glass protecting clinic workers from the possibility of violence from overzealous protestors reflects one stark change, according to the filmmakers. Back then, they argue, “security was light,” and clinics resembled doctors’ offices.

Some extremists have perpetrated unconscionable acts of violence against abortionists, but the pro-life proponents in “The Abortion Divide” don’t intimidate anyone. Reasonable and thoughtful obstetrician and gynecologist Dr. Monique Ruberu, for instance, counsels women, without badgering, to take progesterone to reverse their abortions. (The treatment’s efficacy hasn’t been demonstrated, however.)

The introduction of the RU-486 pill has been, from the pro-life perspective, perhaps the most disastrous change the filmmakers document. Watching women take these pills as if they were Tylenol will dismay pro-life viewers.

“The Abortion Divide,” however, also records the progress the pro-life movement has made since the documentarians last visited Philadelphia. Legislation which requires “clinics” to equip themselves like hospitals has reduced their numbers.

Pennsylvania, moreover, was the first state to require facility operators to advise women 24 hours in advance of the risks involved with having an abortion as well as of alternatives. The emergence of crisis pregnancy centers to promote such alternatives has been another positive development.

The filmmakers deserve credit for exploring this acrimonious issue from all sides without unduly ennobling or demonizing the players at the drama’s center. Pro-life viewers will take exception, however, to their referring to pro-life advocates as “anti-abortion,” especially when they don’t call the other side “pro-abortion.”

Obenhaus’ wearily resigned, fatalistic conclusion will likely put off the pro-life audience off as well. Describing the mindset of those who advocate for legal abortion, he says, “‘Only they know what they should do,’ it’s a statement I heard 36 years ago and continue to hear repeated today.”

But he says this of pro-life proponents: “The anti-abortion forces I met here in Pennsylvania are unmoved by any argument for abortion. They are more organized, more dedicated and even more uncompromising than they were 36 years ago.”

The bottom-line message is clear: Blame both sides for the never-ending divisions over abortion, but more of the blame resides with abortion opponents, who aren’t willing to compromise. So much for the attempt to present a balanced outlook.
– – –
Byrd is a guest reviewer for Catholic News Service.