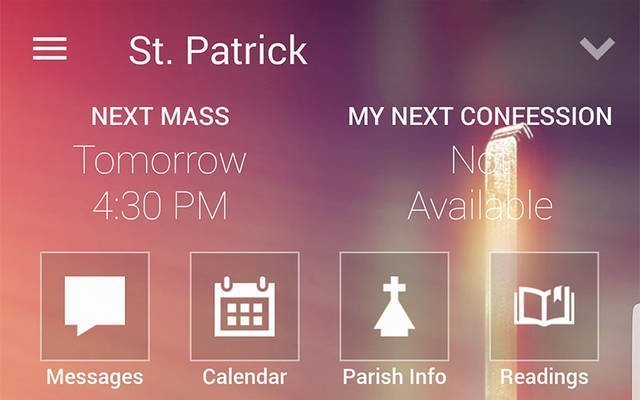 Those words were emblazoned upon the green shirts a handful of people were wearing at a recent Mass at St. Patrick Parish in Victor. These people were encouraging Mass-goers to download St. Patrick’s new mobile app, explained Tom Kolb, one of the green-shirted volunteers and a member of St. Patrick’s pastoral council.

“People could come and stop after Mass in the parish center. If they could prove to us that they downloaded the app, they were able to enter into a raffle,” Kolb said.

“We think it’s going to be a great tool for increasing our Mass attendance and sense of community. We’ve had a great response to it so far,” Kolb said.

The app, called MyParish, was developed by a company called Diocesan Publications and currently is being used by more than 300 parishes throughout the nation. The company worked with St. Patrick’s staff and volunteers to customize the Victor parish’s app.

This process was easy and relatively quick, said Kolb, noting that the idea of a parish app was first brought to the parish’s pastoral and finance councils early in 2019. After looking into the idea and checking out the way the MyParish app had been customized for other parishes, St. Patrick launched its app in late February. It is the second parish in the Diocese of Rochester — behind All Saints Parish in Corning and Painted Post — to utilize the app.

The app contains a number of attractive features, some of which are specific to St. Patrick Parish and some which would be helpful to all Catholics, according to parishioner Ken Reasoner.

“The app comes with daily Mass readings, many standard prayers, Catholic news and other information, updated daily by the MyParish resource teams. There’s even a how-to guide for making a confession, in case you forgot,” Reasoner said.

The app also provides direct access to Formed.org, which is an online resource stocked with Catholic videos and e-books, as well as access to both current and past parish bulletins, Kolb said. The app also includes a calendar of parish events, a directory of parish staff — complete with contact information — and direct links to the parish’s website, Facebook page and YouTube channel, as well as the parish’s youth-ministry Facebook page. The app enhances the channels of communication the parish already was using, Reasoner added.

“Our parish has a very good website, an active Facebook page and a YouTube channel for recorded Masses, but you have to go to them to see what’s new,” he said. “The MyParish app has notifications on the phone that catch your attention.”

With just one tap, app users also can call the parish office or start an email to the parish, and a listing of St. Patrick’s Mass times also is just one tap away. Parishioners utilizing the app also may elect to set “MassMode reminders,” which are notifications that pop up on their phone 20 minutes prior to the Mass times they choose and remind them to silence their phones.

Those who download the app also may elect to receive notifications of parishwide announcements, such as the Mass times for such holidays as Easter and Christmas, or such events as the parish’s recent St. Patrick’s Day party, Kolb said.

“Our hope is to increase attendance not only at Mass but also at the different events we have throughout the parish community as well,” he said. “You’re looking at your phone a million times a day anyway, so why not get an extra notification or two from your church? It’s a much more convenient way to share information.”

The app also allows users to join ministry-specific groups and to send and receive messages within those groups, Kolb said. There’s a group for the pastoral council, for example, and another for the parish’s preschool. Members of the pastoral council can use this feature to send out reminders of meeting times and updated meeting minutes, while members of the preschool group can use it to communicate information about snow days or reminders to parents. This method is more efficient than sending out emails or group text messages, Kolb said.

The app is very user-friendly and so far has been well-received by parishioners of all ages, he remarked.

“It’s only a few weeks old so we’re just starting to see its potential,” said Reasoner, noting that notices about the app were included in the magazine mailed to all registered parishioners, including those who do not attend Mass frequently. “We’re hoping that some of them will download the app and ‚Ä¶ will realize the importance of returning and being more active at Mass and parish events.”