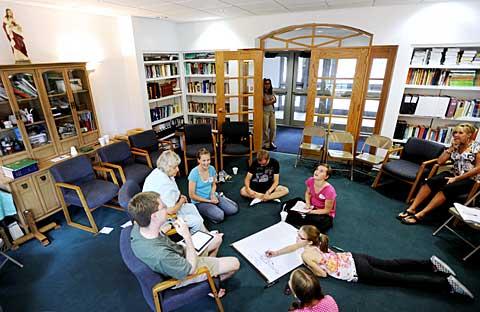 VICTOR — The first room inside the main entrance to St. Patrick Parish Center is a cozy and welcoming space, alternately known as the parish library and the parish living room. In this room, parishioners can watch religious movies on a big-screen television or settle down with a book in a chair next to the bay window overlooking the parish lawn.

Parishioners intent on settling down with a specific book, however, might want to factor in some extra time to find that tome on the parish library’s shelves. The library contains a wealth of information, according to Lynette Saenz, pastoral associate, but its organization leaves something to be desired.

Currently, a copy of the Catechism of the Catholic Church sits next to a children’s picture book about St. Joseph, and Pope John Paul II: A Tribute, a large coffee-table book, is housed next to a Precious Moments children’s Bible. Tomes about the Vatican are mingled with those about planned giving, and a book about parables sits next to one about saints’ lives.

"You’re not exactly sure where to go to find (specific) books," Saenz said.

That problem will soon be a thing of the past. In August Saenz put out a call for volunteers willing to help reorganize the library and catalog its materials. Saenz said she and the volunteers plan to start the project in September.

"It’s a big project. I’ve gotten a few people that said they would be willing to help out," she said.

Saenz said she hopes to make books and other materials easier to find, but doesn’t plan to get too carried away. She and the volunteers aren’t planning to turn the room into a formal, polished library, but they do want to make it a resource for the entire parish.

"We’re not doing the whole Dewey Decimal System or anything," she said. "This is something that we want to make available to parishioners and volunteers, and just a location where all the staff can go."

Saenz said she envisions the parish library as a place where children can go to watch "Veggie Tales" movies or an animated film about Jonah, for example, while their parents read up on the lives of such saints as St. Teresa of Avila. She hopes it can be a resource for catechists who want to brush up on their knowledge or parishioners who’d like to borrow a copy of the catechism or a children’s storybook about saints. The library also contains bins of such magazines as Ministry and Liturgy, Church Magazine and America, and numerous volumes of the Catholic Encyclopedia.

"We have a lot of Bibles, a lot of reference material. There are tons of children’s books. There’s stuff for catechists, some of the faith-formation type books, just a lot of different reading materials that Catholics would be interested in. It’s a wide range of things," she said.

Saenz estimated the library currently contains several hundred books and other materials. It also contains several resources related to the history of St. Patrick Parish, including several scrapbooks filled with newspaper clippings about the parish and its parishioners, as well as items of interest to local Catholics, such as Pope Benedict XVI’s 2008 visit to the United States.

Saenz said the parish hasn’t yet decided exactly how the library will work, but parish staff have discussed the idea of having set times — perhaps after weekend Masses — for people to come in and check out books and other materials. Such specific details have yet to be finalized, but Saenz nonetheless is excited about the library’s potential to benefit many in the parish.

"It just seems like such a great opportunity for people to go in and grab a resource and just kind of read up on different topics," she said.