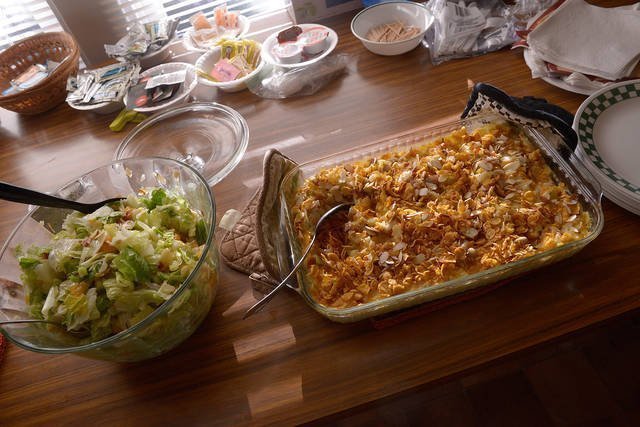 Parishioners of St. Patrick Church in Victor volunteered to serve a meal and visit with local veterans Oct. 9 at the Canandaigua Veterans Club. (Courier photo by John Haeger) 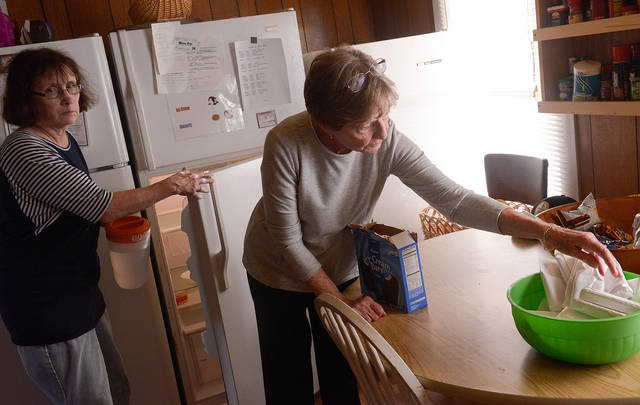 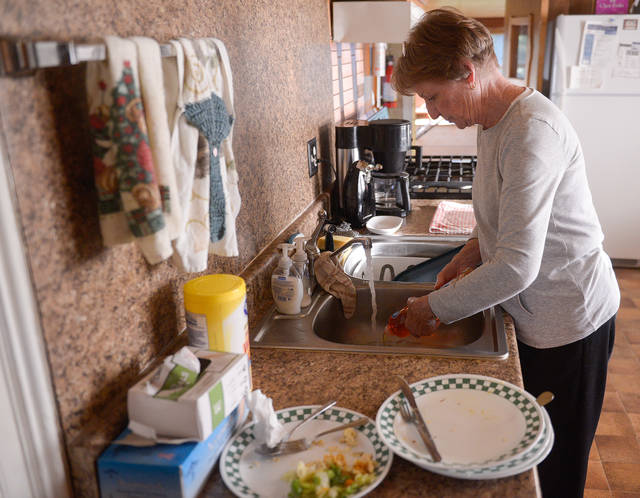 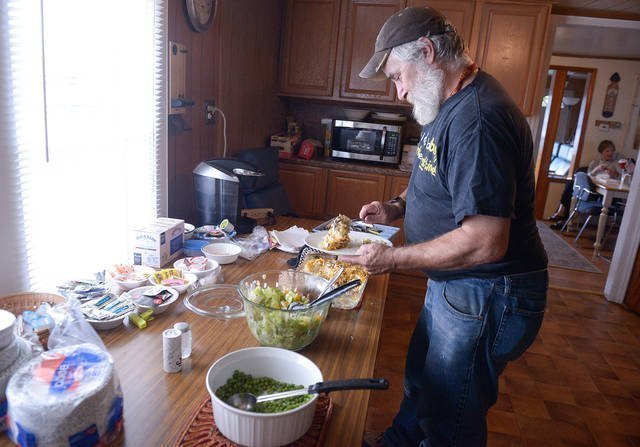 Having served in Vietnam in 1965-66, Joe O’Mara feels a special commitment to assist other military veterans.

“You know what buddies of yours went through while they were in the service. A number have emotional problems, some have long-lasting physical ailments,” he remarked.

O’Mara does his part by volunteering at the Canandaigua Veterans Club — a role shared by many fellow members of St. Patrick Church in Victor. Throughout the year, parishioners provide food as well as fellowship for patrons of the club, which offers dinner every Monday through Thursday except for holidays. St. Patrick covers the second Tuesday and Thursday of each month and is among a number of organizations and individuals assisting with the meals.

Volunteers personalize their efforts by not only preparing dinner, but also sitting down to eat and socialize with the veterans.

“It’s a nice ministry for the people of St. Patrick’s,” said Bob Kelly, who coordinates the parish’s meal volunteer schedule. “It is a very personal way to help somebody. Lots of times we’re asked to give money to help out one organization or another, but this is an opportunity to actually make a meal and sit down and get to know the veterans. For the people that volunteer from St. Patrick’s, that’s what they find most rewarding. They’re not just preparing something and dropping it off.”

St. Patrick has been involved with the dinner initiative since 2012, when a group of parishioners sought to start a ministry for veterans and found out about the meal program in neighboring Canandaigua. The Victor parish’s volunteer base has grown to about 25 people. Kelly, who assists at the dinners with his wife, Jan, said that most volunteers cover one or two meals per year and some make a monthly commitment. (Anyone interested in becoming a dinner volunteer can contact Kelly at earthexps@frontiernet.net.)

According to Barb Hildreth, Canandaigua Veterans Club president, an average of eight or so veterans attend the dinners, paying a mere $1 per meal. Hildreth said the patrons are mostly males — several of whom served in Vietnam — along with a couple of female veterans.

“What they get is a sense of community. It’s like a home, where they can get mom’s home-cooked meal. Everybody thinks of them as family,” Hildreth said. “I think they see it as a second home.”

O’Mara is a board member of the Canandaigua Veterans Club and serves as a substitute cook for the dinners along with his wife, Pat. Noting that the dinner patrons’ average age is above 50, he encourages more veterans to take part, emphasizing that the club is available to any military veteran regardless of age.

According to O’Mara, the Canandaigua Veterans Club was begun in the early 1950s, in large part to reach out to injured soldiers who were being sent home from the Korean War. The club has been at its current location at 17 Center Street in Canandaigua since the early 1990s.

Hildreth said that Veterans Club members typically have received, or are receiving, services at the Canandaigua VA Medical Center, although the Veterans Administration is not involved in the club’s operation. The volunteer-run, nonprofit club is funded mostly by the United Way, with additional donations coming from veterans’ organizations. In addition to offering dinner several times per week, the club plans such social events as boat trips on the Canandaigua Lady, summer picnics and holiday parties.

Hildreth — who worked for 37 years at the local VA Medical Center before her 2015 retirement and also has a husband and son-in-law who are veterans — said she feels strongly about giving back to veterans because of what they’ve sacrificed for their fellow Americans. Meanwhile, O’Mara — who served in the United States Air Force during the Vietnam War, logging duty in Pleiku and Phan Rang — said he’s happy to assist other veterans out of gratefulness for the good life he’s had following a tough military stint.

“You thank your lucky stars,” he said.