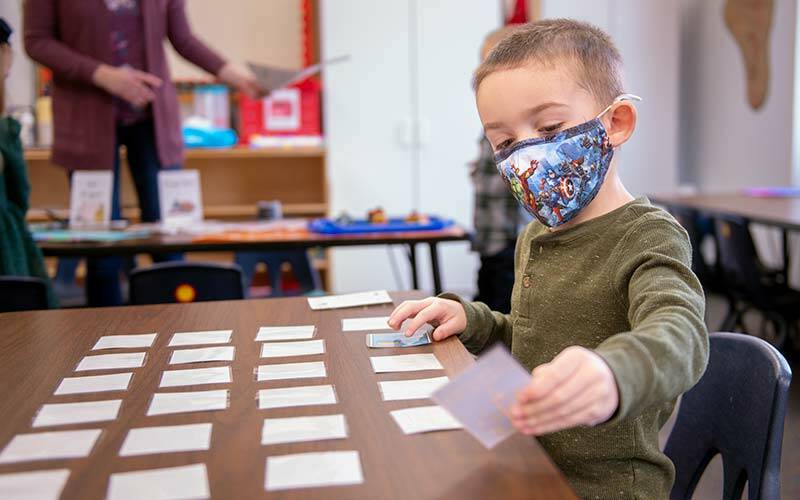 Lucas Herman (above) works on a language arts lesson at the preschool Jan. 24. Everly Jackson (left) cleans up after completing a STEM lesson.

“I can tell she’s really absorbing a lot of the key components of our faith, … those pieces of becoming a lifelong Catholic, which is what we hope and dream for her. It’s really important to us that she has that faith-based education at the foundation of her school experience,” said Mitchell, who belongs to St. Patrick Parish in Victor.

Mitchell’s dream for her daughter mirrors the dream shared by the two mothers who founded St. Patrick Preschool 25 years ago. Now a thriving ministry of the Victor parish, St. Patrick Preschool was founded in the 1990s by two parishioners who wanted to provide a solid foundation rooted in the Catholic faith for their own children as well as those of the many other young families in the parish, according to Father Edison Tayag, pastor at St. Patrick Parish.

Those two mothers — Kathy Pancoast and Mary Moore — didn’t initially set out to launch a preschool program for the parish, Moore recalled. At first, they simply hosted regular playgroup meetings in their basements. Moore, who had a degree in education, and Pancoast made a point of providing a nurturing environment where kids could both play and learn. In its second year, Joan Oliphant — another mother with a background in education — began to help Moore and Pancoast, and as word of the group spread, it quickly outgrew its humble basement headquarters.

Moore, Pancoast and Oliphant eventually asked for and received permission to use the rooms in the parish center’s education wing. These rooms were used for faith-formation classes in the late afternoons and evenings, but were largely unused during the morning and early afternoon hours when the group met, Moore said.

“Each year, we added more and more children, and moms of those children asked if they could be part of it, and a few of them were teachers, and it just grew from there,” Moore said.

The program became more structured as it grew, especially after it was absorbed by St. Patrick Parish, she added.

The preschool program is a logical ministry for the parish to offer to its many young families and also helps the parish evangelize, Father Tayag remarked.

“Any institution can excel in academic excellence, but when we look at the faith component, you cannot get that elsewhere,” he said. “Sometimes the preschool can be a bridge for parents to rediscover their parish involvement. … There’s a certain invitation for them to rediscover and go deeper in their own Catholic faith.”

St. Patrick Preschool currently offers a structured half-day program for 3-year-olds, as well as a half-day program for 4- and 5-year-old children. Plans are in place for the preschool to offer a full-day program for some of its older students next year, according to Donna DeJoode, director of the preschool. Children in both the 3-year-old class as well as the 4- and 5-year-old class follow a specific curriculum and learn about the traditional preschool staples of shapes, colors, letters and numbers. They also learn about Bible stories, saints and the Catholic faith, DeJoode said.

“The kids pray every day, both before snack and then also at the end of the day. … We have a Christmas pageant every year,” she said.

The parents who send their children to St. Patrick Preschool appreciate this faith-based approach to schooling, noted Bryan Stanistreet, whose 5-year-old son, Nolan, is in his second year at the preschool. The school’s faculty and staff have done a great job preparing Nolan and his classmates for kindergarten, agreed Stanistreet and Mitchell.

“They have a really nice balance,” Mitchell said. “It’s not an over-emphasis (on academics). They still really focus on good, strong social skills and being a good friend and Catholic virtues.”

The teachers frequently collaborate and truly care about the children, added Margie Everett, who teaches one of the 4- and 5-year-old classes. Everett, who is a St. Patrick parishioner, said she enjoys being able to foster children’s love of learning while at the same time nurturing their budding connection to God and their faith.