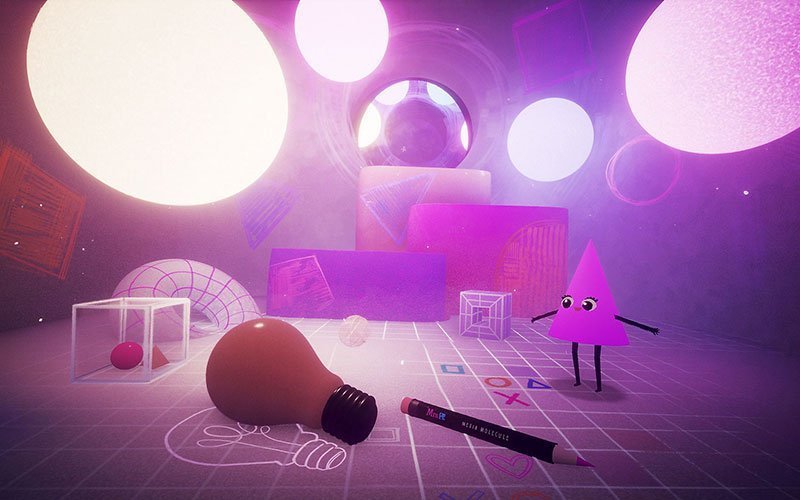 This is a scene from the video game "Dreams." (CNS photo by Sony Interactive Entertainment)

NEW YORK (CNS) — With its focus on fostering creativity, “Dreams” (Sony Interactive Entertainment) lets players, for once, be the driving force behind their game content. While that represents a unique opportunity for grown gamers, the inclusion of some vulgar language makes this an inappropriate title for youngsters.

The brief three-hour story campaign follows unemployed jazz musician Art after he has a fallout with his friends. He takes an introspective journey across his past, present and future and ultimately finds healing for his fractured relationships.

But the game’s outstanding features are its two creative modes, “Dream Shaping” and “Dream Surfing.” Within the former, for example, players can realize almost anything they can imagine — scene backdrops, musical scores, animated short films and more.

The content thus produced can be shared in a social hub called the Dreamiverse. Additionally, gamers can join an online community to partner with others in generating new visions.

Accessibility is also a major asset of “Dreams,” with controls and color schemes easily changed in settings for players with many different needs. A vast spectrum of game types is available, from platforms and shooters to role-playing and other genres. The choice of art styles is equally diverse.

At least some parents may consider “Dreams” an acceptable choice for older adolescents, despite the objectionable elements listed below. The need to strike a balance between this title’s less welcome aspects and the inventiveness it encourages recalls St. John Paul II’s observation in his 1999 Letter to Artists that, “even in situations where culture and the church are far apart, art remains a kind of bridge to religious experience.”

The game contains some cartoonish violence and occasional mild oaths and coarse language. The Catholic News Service classification is A-III — adults. The Entertainment Software Rating Board rating is T — teens.