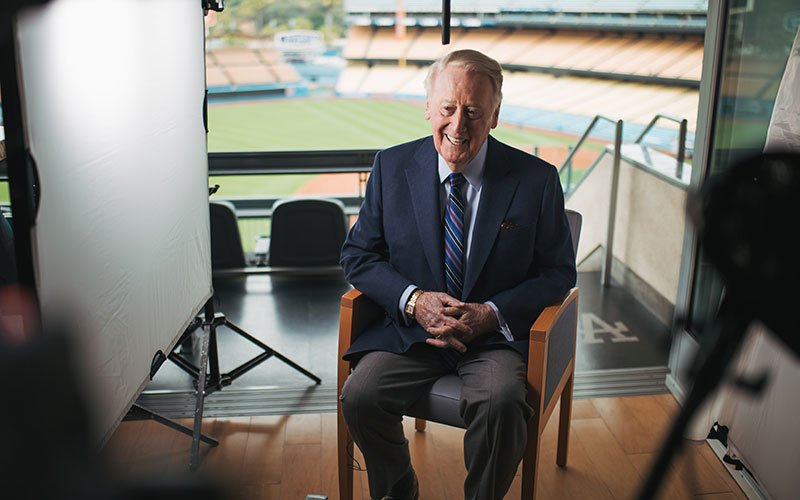 Vin Scully is seen during a 2019 interview for the baseball documentary "Soul of a Champion: The Gil Hodges Story," produced by Spirit Juice Studios in association with Catholic Athletes for Christ. (CNS photo by Spirit Juices Studios)

LOS ANGELES (CNS) — Legendary broadcaster Vin Scully, best known for his 67 seasons calling games for the Los Angeles Dodgers, died at his home in the Hidden Hills section of Los Angeles Aug. 2. He was 94.

“We have lost an icon. Vin Scully was one of the greatest voices in all of sports,” Dodgers president and CEO Stan Kasten said in a statement.

“He was a giant of a man, not only as a broadcaster, but as a humanitarian. He loved people. He loved life. He loved baseball and the Dodgers. And he loved his family,” Kasten said.

“His voice will always be heard and etched in all of our minds forever. I know he was looking forward to joining the love of his life, Sandi. Our thoughts and prayers go out to his family during this very difficult time. Vin will be truly missed,” he added.

Born Nov. 29, 1927, in the Bronx, a borough of New York City, Vincent Edward Scully was raised in an Irish Catholic family. He began his career as a student broadcaster and journalist at Jesuit-run Fordham University in New York, where he majored in English and helped launch the student radio station WFUV.

In 1950, Scully joined Red Barber, sports director of the CBS Radio Network, and Connie Desmond in the Dodgers’ radio and television booths when the team was in Brooklyn, New York. Barber had originally recruited Scully for CBS’ college football coverage.

He was named the team’s lead announcer in 1953 and became an icon after the team moved to Los Angeles in 1958 and he moved with it.

Many Dodgers fans insisted on bringing portable listening devices (starting with transistor radios) to listen to Scully, even though the game was right in front of them.

He was once voted by fans as the “Most Popular Dodger” of all.

“I think about my career, and all I can say is, ‘Thank God who made it all possible,” he once told The Tidings, then the newspaper of the Los Angeles Archdiocese.

A multi-award-winner — including National Broadcaster of the Year and Broadcaster of the Century by the American Sportscasters Association — Scully was inducted into the broadcasters’ wing of Baseball’s Hall of Fame in 1982. In 2009, he received the Cardinal’s Award from the Archdiocese of Los Angeles for his service to the local church and community.

In 2016, he received the Gabriel Personal Achievement Award from the Catholic Academy of Communication Professionals.

Scully “epitomizes what the Gabriel Awards represent: positive, upbeat, soulful, kindhearted and conscientious,” said Susan Wallace, chair of the Gabriel Awards competition. “For nearly seven decades, Vin Scully has been the reassuring voice of honesty and optimism in sports broadcasting, enthralling viewers and listeners with his limitless knowledge of baseball and illuminating lessons on life.”

The award was presented during the Catholic Media Convention in St. Louis in June of that year, and Scully, then 88, couldn’t accept the award in person as the Dodgers were playing in Los Angeles against the Atlanta Braves.

But in a prerecorded acceptance speech, he asked that a photo be sent to him of all the priests and women religious in attendance at the ceremony, saying he wanted to take it with him on Judgment Day so he could hold it up and say, “I’m with them.”

In 2015, he announced he would retire the following year. Because of his advancing age and a desire to spend more time with his wife, children and grandchildren, Scully had already curtailed his workload a few years earlier. At the close of his career, he was only broadcasting Dodgers home games and road games in California.

“When it all boils down, I am the most ordinary man you’ve ever met,” he said at news conference about his retirement plans. “I was given an extraordinary opportunity, and God has blessed me for doing it all these years.”

By the time he retired, he was the longest-tenured broadcaster with a single team in pro sports history.

The Dodgers shared several tributes to Scully through its social media accounts, including its Twitter account, @Dodgers. One tribute included a video montage with the caption: “There will never be another Vin Scully. You will be forever missed.”

His wife, Sandi, died in 2021. He is survived by four children, 21 grandchildren and six great-grandchildren. Scully’s oldest son, Michael, died in a helicopter crash at age 33 in 1972.