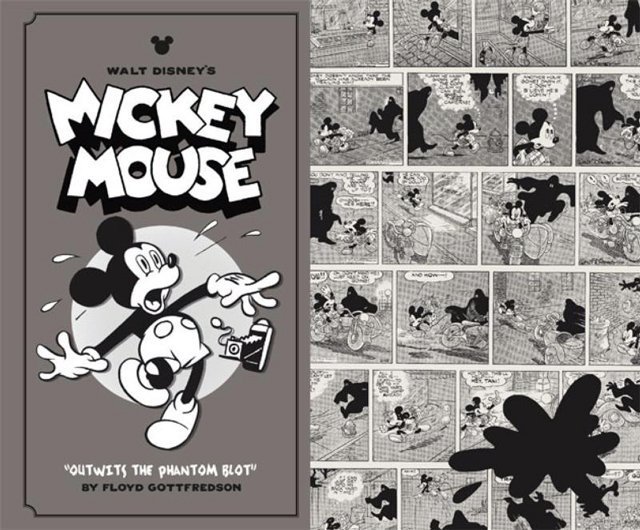 This is an image from Walt Disney's Mickey Mouse comics by legendary artist Floyd Gottfredson.

NEW YORK (CNS) — Strange as it seems, part of the output of an ongoing project to reissue old Mickey Mouse comics warrants a content warning. Not for violence or sexual elements, of course, but for a level of racial insensitivity that was taken for granted in many quarters in the mid-20th century but that now affronts.

The comics were written and drawn by legendary Disney artist Floyd Gottfredson. “Walt Disney’s Mickey Mouse” (Fantagraphics) is a continuing series of hardbacks that collects the entire Gottfredson Mickey run, beginning in 1930 and ending with his last strips in 1975.
The best years of the strip were the first 25, before it was turned from a daily series that had long storylines into a gag-a-day feature with a softer edge.
To note that parts of Gottfredson’s work are racially problematic is not to say that he was a racist. David Gerstein, the series editor, puts it well in an introduction: “As remembered by his peers, Gottfredson was no bigot. But like many old-time culture creators, he never fully grasped the impact of extreme ethnic humor.”
Born in 1905 in a railway station in Kaysville, Utah, Arthur Floyd Gottfredson grew up in the small town of Sigurd, south of Salt Lake City. As a youngster he was interested in comics like George Herriman’s “Krazy Kat,” Billy DeBeck’s “Take Barney Google, F’rinstance” and Walter Hoban’s “Jerry on the Job.” He also liked reading the young adult rags-to-riches novels of Horatio Alger as well as detective stories.
When he was 11, Gottfredson accidentally shot himself in the arm while playing with a gun. It took nine operations to repair the damaged limb. Gottfredson started drawing to pass the time, taking correspondence courses in art from the London School, and from the Federal School of Illustrating and Cartooning.
In 1930, Gottfredson, already on the Disney staff, was assigned the job of creating the “Mickey Mouse” comic strip. He would hold his position for more than four decades, although his work was often supplemented by assistant writers who helped flesh out his ideas.
Most of the volumes in the Fantagraphics series are beautifully drawn and safe for all ages. Readers share adventures with Mickey and are introduced to such characters as the Phantom Blot, time traveler from the future Eega Beeva and the Bat Bandit.
The 2013 volume “Mickey Mouse Outwits the Phantom Blot,” however, showcases the offensive attitudes discussed above. Two of the stories, “Mickey Mouse Meets Robinson Crusoe” and “An Education for Thursday,” are profoundly demeaning in their depiction of Africans.
In the latter story, Mickey receives a package containing a small man from Africa. Nicknamed “Friday,” he has thick lips, bones hanging around his neck, and can only say, “Glug — Ga-Booch!”
The main story in this installment, from which it takes its title, is one of the most dynamic and creative Gottfredson ever produced. A precursor to Harry Potter’s Dementors, the shadowy figure known as the Phantom Blot has been committing crimes and the police are baffled. In the end, with some bravery and the help of detectives, Mickey solves the mystery.
Fortunately, Fantagraphics, one of the best curators of vintage comics in the world, handles the negative aspects of this larger narrative with sensitivity and integrity. Gottfredson used his daily strips as the building blocks for a serial story. Each of these is introduced, in the books, by a comics scholar. Their expert commentary provides much-needed context for creations that are more than a half-century old.
Introducing “An Education for Thursday,” for instance, Jonathan Gray notes that much of the strip’s humor comes “from the highly embarrassing … social mores” that prevailed at the time it was drawn.
The latest volume, “Mickey vs. Mickey,” collects a series of strong strips originally published between 1951 and 1953. The title story involves Mickey’s dealings with his evil twin, Miklos. There are gags featuring Disney canine Goofy and a subtext of anxiety about 1950s suburban affluence as Miklos sees his doppelganger living in comfort, and attempts to take over.
Full of fun slapstick humor, and free of racial concerns, “Mickey vs Mickey” is appropriate for everyone.
Reading the books in chronological order, it’s interesting to see how the character of Mickey Mouse has evolved. Originally Gottfredson portrayed him as an adventurer who tangled — more or less lightheartedly — with spies, mobsters and kidnappers. In the later 1930s, however, as the Depression dragged on and war clouds begin to gather, the gags took on a darker tone.
In the postwar years, Mickey morphed again. Transplanted to the safe environs of middle-class life — what historian Kenneth T. Jackson dubbed the “crabgrass frontier” — he became the cuddly and iconic Disney figure he remains, far removed from his rough-and-tumble early days.
– – –
Judge reviews comic books and video games for Catholic News Service.
Copyright © 2022 Catholic News Service, Inc. All rights reserved. Linking is encouraged, but republishing or redistributing, including by framing or similar means, without the publisher's prior written permission is prohibited.