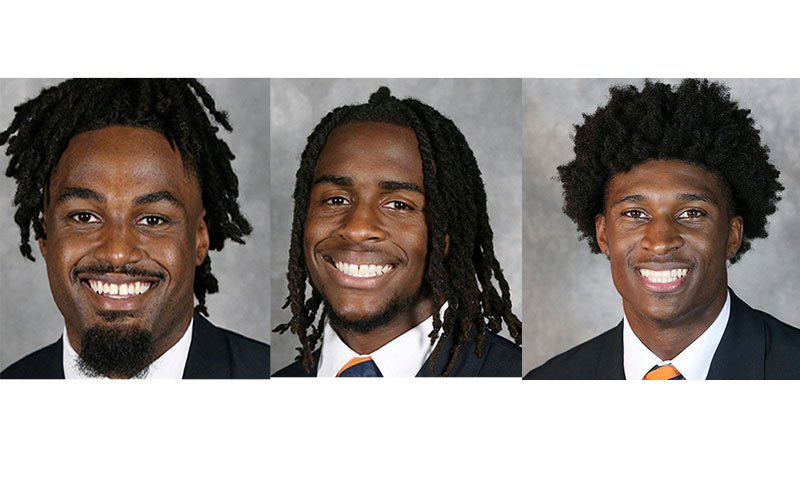 CHARLOTTESVILLE, Va. (CNS) — Students at the University of Virginia in Charlottesville, are experiencing “great sadness and even anger” and “a tremendous amount of grief” following a shooting on the grounds the night of Nov. 13, said Dominican Father Joseph-Anthony Kress, chaplain of the university’s Catholic Campus Ministry.

“Obviously for the students who were friends, teammates, hall mates, with the young men that were killed, they’re taking it pretty hard, and they’re devastated,” he said, adding that “the trauma” of having to shelter in place for 12-plus hours affects the whole student population.

“When an entire university community of 18- to 22-year-olds gets a text message in all capital letters that says, ‘Run, hide and fight,’ that has a major impact on you,” he told The Catholic Virginian, Richmond’s diocesan newspaper. “So they’re struggling with that.”

Just after 11 p.m. Nov. 13, Devin Chandler, Lavel Davis Jr. and D’Sean Perry, all members of the university’s football team, were fatally shot on the grounds. Two other students were wounded.

The University of Virginia issued a shelter-in-place order that was not lifted until the suspected gunman was arrested the next morning. He was identified by police as Christopher Darnell Jones Jr.

Jones faces three charges of second-degree murder and three counts of using a handgun in the commission of a felony.

Father Kress described the current situation at the university as “kind of the emotions of a conflicted heart.”

In the midst of the sadness, anger, hurt and grief blanketing the community, Father Kress looked to the students with pride.

“You (see how) they have come together to support each other, to love each other, to grieve together as a community, to check in on each other,” he said. “And you can sense a tremendous amount of pride … in being able to witness to their strength together in that.”

When the shelter-in-place order was lifted, the St. Thomas Aquinas University Parish building was opened for students as a “place of prayer and support.” Father Kress said Catholic Campus Ministry focused its efforts into the evening of Nov. 14.

Nearly 400 people, the majority of whom were undergraduate students, attended a 5:15 p.m. requiem Mass for the three students who were killed.

“We had this huge outpouring of students coming together, allowing this church to be a place of healing and coming together as a community of prayer, and even an opportunity to grieve together,” Father Kress said.

Following Mass, a meal was served in the parish hall to provide “a space of hospitality” for students to be in one another’s presence following the lockdown.

Adoration was held from 6 p.m. to 9 p.m., with different periods of intentional prayer throughout the evening, including vespers and a rosary intended for the students who were killed.

At 9 p.m., the church had night prayer and benediction.

The university held a candlelight vigil at 7 p.m. Father Kress said many students attended Mass before joining the public vigil.

He said that upperclassmen are investing time into being with underclassmen “who are taking it a little harder” and that the campus ministry staff is “making sure that everybody is being checked in on and that they know that they have the support” to talk about and process the event.

In this “tremendous moment of grief,” Father Kress wants the University of Virginia community to come together “and recognize that it’s only true goodness that can overcome evil.”

“Even though this evil has invaded our space, invaded our lives and our university, we will not let evil overcome us, but we will overcome evil with good and with the God who himself is goodness,” he said.

“And we continue to pray for these men,” he continued. “We keep them in our hearts, and we let the relationships that we had with them persevere, albeit changed, but truly persevere.”

In conjunction with the support students and the university community have shown one another since the tragedy, Father Kress has expressed gratitude for the outpouring of prayers from the faithful outside of Charlottesville, as well.

“I have felt the support, knowing that we are hurting at this moment,” he said. “The rest of the diocese is aware of that and has offered prayerful support to join us. That is a great consolation, and I think a true testament to the beauty that is the Body of Christ and how that’s lived out in the Diocese of Richmond.”

In a Nov. 14 statement, Richmond Bishop Barry C. Knestout asked for prayers for the victims, their families and the university community.

“Like you, I grieve for the loss of life, and my heart breaks for the suffering caused by this troubling act,” the bishop said in the statement.

“While we await more details from school and law enforcement officials, let us reflect on how violence permeates the culture in which we live, and our efforts to promote peace within our society,” he said. “May our Blessed Mother, Queen of Peace, intercede for us.”

Reynolds is interim assistant editor of The Catholic Virginian, newspaper of the Diocese of Richmond.