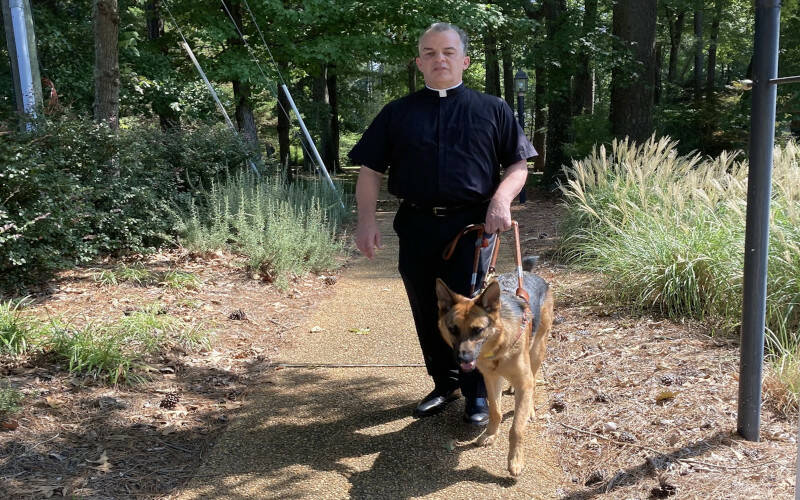 Father Mike Joly walks with Duffy, his seeing eye dog, Sept. 19 on the grounds of St. Joan of Arc Church in Yorktown, Va., where he is pastor. The priest adopted Duffy from “The Seeing Eye” in Morristown, N.J., where he trained with the German shepherd for three weeks. (CNS photo by Mary Ann Vogelbein)

YORKTOWN, Va. (CNS) — Father Mike Joly, pastor of St. Joan of Arc Parish in Yorktown, is having “a blast” with his new guide dog, Duffy.

The German shepherd gives Father Joly, who has been blind since childhood, the capability, independence and confidence to explore familiar and new places. Prior to Duffy, he used a cane or held onto someone’s arm for guidance, both slow-going.

Duffy, on the other hand, “zips” through airports with him, maneuvers around tables and people in restaurants, leads him in hospitals and guides him in banks, malls and other venues.

Father Joly had a guide dog, Zeke, a “fun-loving big dopey lab,” from his junior year in college to mid-seminary, a span of six years.

“Now, 30 years later, I’m having a blast with this dog,” he told The Catholic Virginian, newspaper of the Diocese of Richmond. “He does some really cool things.”

One “really cool thing,” he said, is that the dog “keeps an eye” on Father Joly or tilts his head and points an ear up “no matter” where the two go, and Duffy communicates his need to relieve himself by nudging the priest’s hand with his snout and does the same when he is ready to come back in.

In addition to steering the priest away from obstacles at dog height, Duffy helps him avoid obstacles at the height of a human’s shoulder or head. He can train Duffy to do other things more specific to him. For example, he can train Duffy within 15 minutes to always enter through a particular door in a mall.

Father Joly adopted Duffy this past summer from “The Seeing Eye” in Morristown, N.J., where he trained with Duffy for three weeks.

The school’s philosophy is to lavish praise on the guide dogs, Father Joly said, so when Duffy is working, he offers simple words of encouragement like “that’s a good boy” every 30 seconds or so and frequently at other times. He said giving positive reinforcement to his dog lifts his mood as well.

“It ends up being a bit of leaven in the day,” he said.

The two work as a team. When walking outside, Father Joly uses a GPS app on his phone, which tells him the names of the street he is on, nearby roads and businesses they pass.

“It gives me an environment,” he said. “I have to know generally where I’m going. His job is to get me there safely.”

Parishioner Cathy Mueller, who drives Father Joly to many of his appointments, said it’s “amazing” to watch the two work together.

When Duffy is in his harness, he’s “working and on guard,” Father Joly said. People must not pet him, feed him, call his name or make eye contact. Doing so can distract Duffy, which can be dangerous for the priest — which he experienced during a visit to his sister’s over the summer.

Duffy is trained to stop at the foot and head of steps and on curbs at street crossings until Father Joly gives the “forward” command. However, when the priest’s sister saw them at the top of stairs, she greeted Duffy by name, and in excitement, the dog lunged forward, causing Father Joly to fall down six steps.

An exception to the no-touch policy is when Father Joly visits parishioners in the hospital. He will let the patients pet Duffy, which often elicits a giggle or brings a smile to the individual’s face. The patients, even those in dementia wards, are “overjoyed” to see the dog, he said.

“A dog is like a song. He speaks to everybody,” he explained. “If there’s someone one who is sick, and if there’s any way that grace or hope can come to them just by petting a beautiful dog, then I’m going to let them do it.”

Duffy doesn’t go to Masses because Father Joly wants the congregation’s attention on the liturgy, not on the dog. However, his canine companion is with him nearly everywhere else.

Father Joly said he gives Duffy time to just be a dog. Off harness, they play catch, and Duffy plays with other dogs. He sniffs poles or other places where other canines have been. People can pet and talk to him.

Jennifer Strash, coordinator of faith formation, said when Father Joly takes the dog to Sunday school, Duffy adds “a spark.” Sometimes he can be comical, such as when he was at a summer concert, he howled when people clapped.

“Duffy has created a lot of excitement in the parish,” Strash said, adding that Father Joly is more “approachable and relatable” to some pet owners now.

Father Joly said Duffy “is a lot of work.” He feeds him twice day, takes him out four to five times a day and grooms him every other day. Because the priest likes “a very clean and meticulous house,” he washes Duffy’s paws whenever he comes inside, making sure he doesn’t track things in.

But the effort is worth it.

Father Joly said he “enjoys” the “increased sense of independence, the greater flexibility and speed of movement” that Duffy brings him.

“He’s turning out to be an excellent guide,” Father Joly said. “While he’s not first a pet, he is first and foremost a highly trained seeing eye dog; nonetheless, having a beautiful animal to receive some joy from and also to bring joy to other people — that’s my satisfaction.”