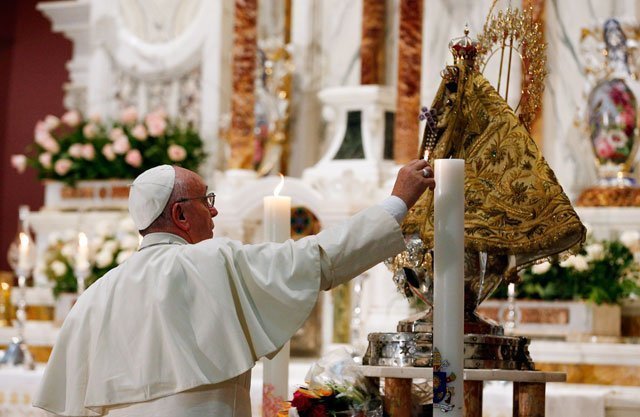 Pope Francis lights a candle at the statue of Our Lady of Charity, patroness of Cuba, in the Minor Basilica of the Shrine of Our Lady of Charity in El Cobre, Cuba, Sept. 21.
By Cindy Wooden
Catholic News Service
SANTIAGO, Cuba (CNS) — In one of the calmer, more intimate moments of his visit to Cuba, Pope Francis and the country’s bishops offered special prayers to the Cuba’s patroness, Our Lady of Charity of El Cobre.
The prayer Sept. 21 at the Shrine of Our Lady of Charity marked the end of a long day for Pope Francis, a day that began in Havana, included a Mass and blessing in Holguin and ended in Santiago de Cuba, on the eastern tip of the island.
Before the prayer service, the pope spent close to 45 minutes meeting with Cuba’s 17 bishops. As is his custom with bishops’ conferences with few members, the pope did not have a prepared speech for the meeting, which was private.
Pope Francis spent about 10 minutes in silent prayer in front of the Marian statue, which was founded in 1606. The brief, formal prayer that followed highlighted how the title "Our Lady of Charity" reflects the truth that God is love and that he sent his son into the world.
The prayer asked God, through Mary’s intercession, to "give full freedom to the children of God."
"Your name and image are sculpted in the minds and hearts of all Cubans, inside and outside the country, as a sign of hope," said the prayer recited by the pope.
Addressing Mary as "mother of reconciliation," he prayed that she would gather her scattered children and "make the Cuban nation a home of brothers and sisters," who open their hearts and minds to Christ.
– – –
Follow Wooden on Twitter: @Cindy_Wooden.
Copyright © 2022 Catholic News Service, Inc. All rights reserved. Linking is encouraged, but republishing or redistributing, including by framing or similar means, without the publisher's prior written permission is prohibited.