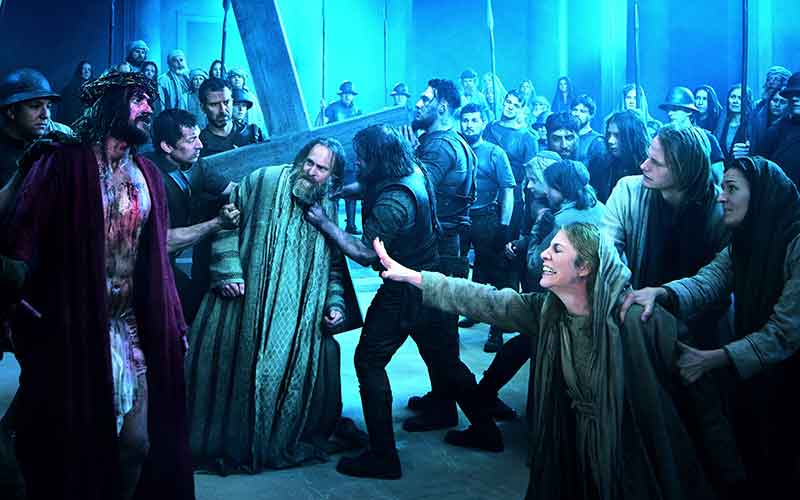 Jesus, played by Frederik Mayet, encounters his mother in a scene in the Oberammergau Passion Play in Germany, which is running from May 14 to Oct. 2. (CNS photo by Birgit Gudjonsdottir, Passionsspiele Oberammergau 2022)

OBERAMMERGAU, Germany (CNS) — The visitors browse the intricately carved wooden Nativity sets or dive into some mouthwatering creamy Italian ice cream at the Eiscafe Paradiso. Thousands from the world over are descending on this picturesque Alpine village to see the famed Passionsspiele, or Passion Play, held here every decade for nearly 400 years.

In the cavernous Passion Play Theatre that seats about 5,000 people, an air of excitement takes hold as Jesus enters, straddling a live donkey on stage. Hundreds of men, women and children, dressed in cloaks of earthen hues, cry out before him, “Hosanna, Hosanna!” marking Jesus’ entry into Jerusalem and the start of his arduous journey from Palm Sunday to the cross — a story known as the Passion.

Later, a hush takes hold in the audience as Roman soldiers come to arrest Jesus, sending him to a sham trial, brutal punishment and execution befitting a criminal.

“This was so powerful seeing the sweep of the Gospel story,” said Christine Dutton, who trains people ministering in the Anglican and Methodist churches in Britain. “All of the disciples fled really quickly from the stage when Jesus was arrested. What so struck me was the political nature of the whole Gospel story — the conflict between Jesus and the authorities,” she told Catholic News Service.

“The Crucifixion scene was particularly well done. Such a gentle way they brought Jesus’ body down from the cross. The care that (was) taken,” she explained, referring to the long white fabric placed on the arms of the nearly 10-foot wooden cross. The fabric was used to deliver Jesus’ mangled body down to his mother, Mary, and his mournful followers.

“So often, week by week we use the lectionary; segment it or sanitize it. Actually, seeing that sweep of events altogether is a powerful reminder of the overarching narrative of the story,” Dutton said. She added that the insertion of the Old Testament scenes, such as Moses and the burning bush, helped to provide context to the unfolding drama engulfing Christ: why he came into the world and died for sinners, but he was raised to new life.

“This was my fifth time coming to see the Passion Play and I don’t mean fifth in one year. I think that explains it all,” fellow Briton Ruth Aspinall told CNS.

“I liked it so much this time and found it simpler. I loved the Resurrection scene, never used before. It was just hinted at in the past. But this time, all the disciples come on stage, light candles. Mary is happy. Everyone sings hallelujah. It was very tastefully done and ended on a joyful note,” she said.

Oberammergau native Christian Stückl has directed the production for more than 30 years, several times reworking the script and modernizing it, including the removal of past anti-Semitic references.

“As a spectator you don’t really have to bring anything (in terms of religious understanding), you can just turn up,” said Stückl. “But as a director, if I didn’t have the belief and conviction that there is a certain power behind this story, behind this Jesus, I wouldn’t be able to tell this story. I wouldn’t need to tell it.”

Linda Taggart, a retired British teacher whose daughter-in-law is from Oberammergau, told CNS she applauded the changes to the text made by Stückl, because not everyone in today’s audience fully knows the biblical account of Christ’s suffering, death and resurrection, once considered common knowledge in earlier times.

“They have to understand what the story is about and what’s its message. This is the most important message in the world,” said Taggart.

“I hope it touches lots of other people’s hearts, too, because the play made me realize how much Christ went through. I knew it, but it really made me think a lot about it. I’m also amazed at how relevant the story is for today,” a reference not only to challenges posed by the COVID-19 outbreak, but to those encompassing conflict, poverty and social injustice gripping many parts of world.

Stückl takes the lead actors and soloists to Israel for 10 days before play rehearsals begin to have them experience the places where Jesus walked and ministered, saying it impacts the performers and the audience.

“It forces us to examine the play anew; to ask: What does this have to do with us? When it dawns on the performers how relevant the lines still are, how strong they are, there is a chance that they will then pass that on to the audience,” he said.

For Oberammergau native Frederik Mayet, one of two actors who plays Jesus, conveying Christ’s message of love and hope to the audience is important and something of a sacred trust.

“We have to try to find the words that reach the people of today. We notice this now in this year’s production. People are really touched,” Mayet told CNS.

“The power, joy, and enthusiasm we have on stage reaches the people in the auditorium automatically, and that’s something special. When the choir is singing, when there are hundreds of people on stage, sometimes it’s a magical moment,” said Mayet, who is portraying Jesus for the second time.

“The Passion Play ends with the Resurrection, but the message is contained in the message Mary Magdalene speaks,” Mayet said. “A woman has the last words on stage and delivers this message: Jesus brings the light, the fire into the world as a sign of hope.”

For Maureen Reade, an Anglican parish priest from Shropshire, England, attending the Passion Play was a dream come true.

“I’ve wanted to come here since I was 17. That was 52 years ago. My head teacher at school came in 1970 and brought us each a bookmark. She told me about Oberammergau. I said: ‘I would love to go.’ She said: ‘You’ve got the rest of your life.’ That’s been my dream,” Reade said.