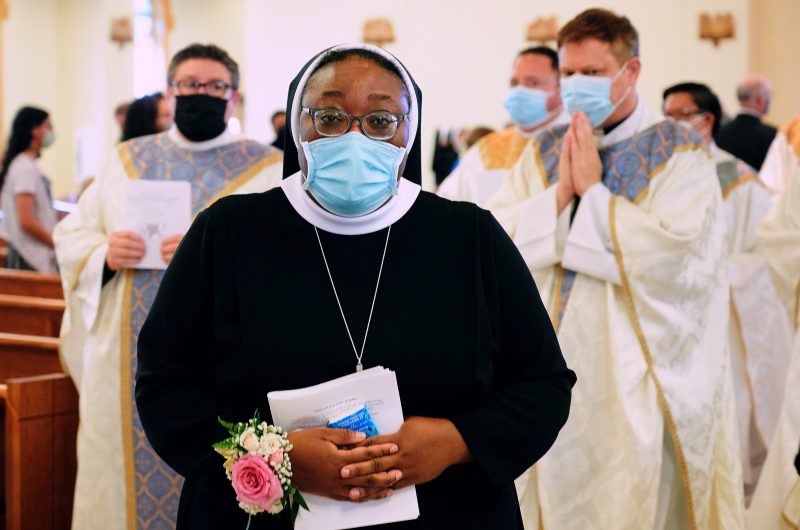 Vocation to the priesthood: Finding the extraordinary

It all began with one fateful email. A senior in college, I was preparing to travel to the U.S.-Mexico border for thesis research on women in migration.

During my search for lodging, a mentor connected me with a small community of Sisters of Charity of Cincinnati who lived near El Paso, Texas.

Just hours after receiving my request, Sister Janet Gildea wrote back: “Welcome!” Without ever having met me, Sisters Janet, Carol and Peggy hosted me in their cozy home and even helped me with my research.

I was touched by the experience, but joining their religious congregation was light-years off my radar.

Six months later, I graduated with degrees in psychology and Spanish, a hunger for faith and service, and an interest in immigration — but no clear career path forward. Beyond all logic, I felt God beckoning me to volunteer in Ecuador with a program called Rostro de Cristo.

Fearful but open, I plunged into what became two years of living in community with other young adults, serving in outreach organizations and sharing life with my Ecuadorian neighbors.

God’s invitation to become a nun

On dirt roads, over steaming plates of plantains and in open-air chapels, I encountered Christ in a way that transformed me irrevocably.

In the midst of all that, a strange thing happened: I sensed God inviting me to become a nun. I was praying on a beach when the alarming thought first arose. Over the next weeks, it kept popping up until I couldn’t ignore it anymore.

I eventually started to meet with a spiritual director, and to my dismay, the possibility of a call to religious life only got clearer.

I realized that my volunteer experience of community, simplicity, spirituality and mission on the margins echoed religious life — and it was bringing me deep joy and purpose. So, I emailed Sister Janet Gildea.

Observing the sisters in their ‘natural habitat’

In the fall, after returning from Ecuador, I moved in with the sisters on the border as a volunteer associate.

I often say that the first few months in the convent were like a wildlife show: “Observe the sisters in their natural habitat!” I was surprised by how “normal” they were. They brushed their teeth, got oil changes, watched movies and — gasp — got on each other’s nerves.

At the same time, I was awed by how they lived out the extraordinary commitment they had made to God, one another and the world. One of the biggest surprises was the array of ways sisters ministered: in health care, pastoral ministry, social work, music, activism, education and more!

I began to understand that I could come as I was and put my gifts at the service of God’s people.

Through shared prayer, reflection days, ministry, advocacy and long meals at the long kitchen table, I tasted the living charism of the Sisters of Charity, and I started to sense that I, too, was born to be “urged by the love of Christ” and “dare to risk a caring response.”

Falling for a person

In a real-life plot twist, just as my heart began to beat in tune with the call of the Sisters of Charity, it also began to fall for a person.

Steve was a dear friend who had been a fellow volunteer in Ecuador. We stayed in touch once back in the U.S., processing our mission experience and musing about where our lives were headed.

Through long phone conversations from El Paso to Boston, our friendship clearly evolved into something more.

I had heard that true discernment is between two goods, but I wasn’t prepared for the anguish of such choosing.

Steve was faith-filled, passionate, gentle, funny, committed to justice and deeply kind. If I were called to marriage, he would be the one.

And yet, discerning with the Sisters of Charity had set my heart afire in ways I couldn’t have imagined. What to do?

My heart tossed and turned all year with indecision between two paths. Eventually, with the help of an excellent spiritual director and the selfless support of both Steve and the sisters, I realized that although I loved Steve dearly, I simply couldn’t imagine my future as a wife and a mother.

Despite the cost, I sensed that religious life would allow my gifts to flourish for the good of the world, and that brought breathtaking inner freedom. Somehow, my heart was made to love widely, in community with other women who felt the same uncommon call.

I entered the Sisters of Charity of Cincinnati in 2012. More than a decade later, I marvel at what that first, fateful email to Sister Janet set in motion.

My curiosity met the sisters’ radical hospitality, and my life changed forever. Sadly, in 2019, Sister Janet passed away too young after a long journey with cancer. I now serve my congregation as vocation director, as she did.

A photo of her smiles at me as I type this story, the twinkle in her eyes urging me forward and assuring me of God’s faithfulness. At the same time, another tab lies open on my laptop screen: the inbox for my vocations email account, ready to welcome those who come seeking.

(Sister Tracy Kemme is a pastoral minister and the vocation coordinator for her congregation, the Sisters of Charity of Cincinnati. Follow her on Twitter @cincyscvocations.)

Tags: Religious Orders
Copyright © 2022 Catholic News Service, Inc. All rights reserved. Linking is encouraged, but republishing or redistributing, including by framing or similar means, without the publisher's prior written permission is prohibited.