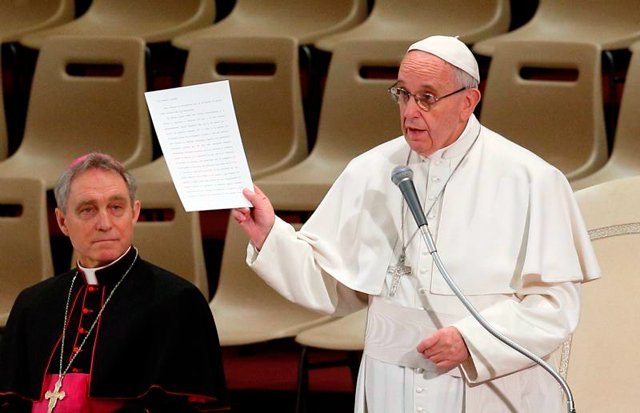 Archbishop Georg Ganswein, prefect of the papal household, looks on as Pope Francis holds up his prepared talk and begins to speak off the cuff during an audience with religious at the Vatican Feb. 1. The audience was an event of the Year of Consecrated Life, which concludes Feb. 2.

VATICAN CITY (CNS) — Respond to the crisis of vocations with intensified prayer, not despair or a lax admissions process, Pope Francis told women and men religious.

He said he is tempted to lose hope, too, asking God, "What is happening? Why is the womb of consecrated life sterile?"

But he warned against fast fixes, saying some religious "congregations experiment with ‘artificial insemination,’" in which they accept anybody, leading to a host of problems.

The vocations process must be done "with seriousness, and one must discern well that this is a true vocation and help it grow," he told members of religious orders, secular institutes and consecrated virgins Feb. 1 in the Vatican audience hall.

The pope met with some 5,000 men and women taking part in events in Rome to mark the close of the Year for Consecrated life, which began Nov. 30, 2014, and was to end Feb. 2, the feast of the Presentation of the Lord and the Jubilee of Consecrated Life.

Handing his written text over to Cardinal Joao Braz de Aviz, prefect of the Congregation for Consecrated Life and Institutes for Apostolic Life, Pope Francis said he preferred to speak from his heart "because it’s a bit boring to read" a prepared talk.

Both his prepared text and his impromptu talk highlighted the three most important "pillars" of consecrated life: being prophetic; being near all people; and having hope.

It is important to be obedient while being prophetic, which is always about following God and reflecting his divine love, he told his audience.

Obedience for a religious is not the same as "military obedience," he said; it’s about giving one’s heart and seeking to discern what is being asked.

If the rules or requirements are not clear, then one must speak with one’s superior and always obey the final word, he said. "This is prophecy — against the seeds of anarchy, which are sown by the devil."

Just doing whatever one feels like is "anarchy of the will," which is "the child of the devil, not God."

Jesus wasn’t an anarchist, the pope said; he didn’t round up his disciples to fight against his enemies. While he pleaded that God "take this cup from me," he still requested his father’s will be done.

Likewise, the pope said, if members of a religious community are asked to obey something that doesn’t sit well, then — he gestured taking a big pill and gulping it down. "Since my Italian is so poor I have to speak sign language," he smiled, adding that "one must stomach that obedience."

Being prophetic is telling and showing the world that "there is something truer, more beautiful, greater and better that we are all called to," he said.

Consecrated men and women are called "not to distance myself from the people and live in comfort," but to be close to Christians and non-Christians in order to understand their problems and needs, he said.

However, when it comes to offering love and attention, the sisters and brothers who live in one’s community get priority, he said, especially elderly members who may be isolated in an infirmary.

"I know that you never gossip in your communities. Never, ever!" the pope said smiling.

Backstabbing and gossip are a danger to religious life, he said.

"Whoever gossips is a terrorist," he said, because they drop harmful words like bombs against others, leaving behind destruction while the attacker walks away unscathed.

"If you feel like saying something against a brother or sister," he said, "bite your tongue. Hard. No terrorism in your communities."

Resolve differences or problems face-to-face with the person in question, he said. But when it’s time for general chapters or other forums involving community life, then people need to be forthright in voicing concerns openly and frankly.

He said, "In public, you have to say everything you feel because there is the temptation to not say things during the chapter" meetings, which then leads to resentment afterward.

"During this Year of Mercy, if each one of you were able to never be a gossip-terrorist it would be a success for the church, a success of great holiness. Be brave!" he said.

The pope thanked religious men and women for their work, especially consecrated women. "What would the church be if there were no sisters?" he asked, recalling their presence in Catholic hospitals, schools, parishes and missions around the world.

A video to accompany this story can be found at https://youtu.be/b8kym7OqTVs