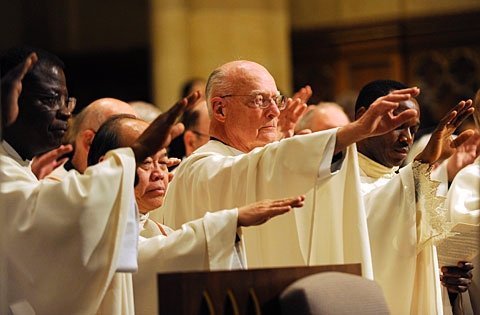 Diocesan priests stand together at the front of Sacred Heart Cathedral as they take part in the annual Chrism Mass April 19.

Although rare circumstances periodically enable married men such as Deacon Scott Caton to be ordained (see related story), being a celibate male is one of the best-known requirements for priesthood in the Latin Rite. Possessing a strong spiritual life and a call to serve also are obvious essentials.

Yet those factors alone don’t automatically put a man on the path toward priesthood in the Diocese of Rochester.

Numerous other standards — in areas related to age, education, physical and mental capacity, and personal history — also must be met before one can enter Becket Hall, the diocesan program for priestly discernment.

Some of the chief criteria, based on information provided by the diocesan Office of Vocations Awareness and U.S. Conference of Catholic Bishops, are:

EDITOR’S NOTE: A list of "Frequently Asked Questions" about vocations is available on the diocesan website at www.dor.org/index.cfm/vocations/faqs/.