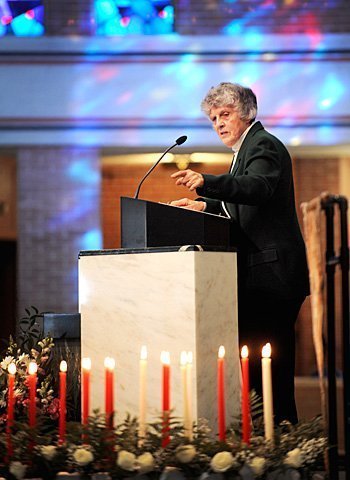 During a Feb. 10 memorial service at Rochester’s St. Ambrose Church,Sister Beth LeValley gestures toward 25 candles symbolizing the 25 peo-ple who passed away in 2012 without family or resources.

ROCHESTER — Ken and Dorothy Siegel attended a burial at Oatka Cemetery last year as part of an effort to accompany people who have died and would otherwise be buried alone.

But that day, they found a friend in the deceased’s wife, whom they had not realized would be there, said Ken Siegel. Two months later, not being able to recover from the death of her husband of 66 years, she passed away, he said. But the Siegels cherished their short time with her and were proud to be present at her burial as well. The couple, originally from Germany, never had children, the Siegels said.

"It was such a spiritual privilege to be there," said Dorothy Siegel. "We’re so grateful."

The Siegels spoke of their experience during a memorial Mass for 25 area residents "whom we do not want forgotten" that was held Feb. 10 at St. Ambrose Church, which is part of Peace of Christ Parish. The church’s altar was decorated with 25 candles and 25 white roses.

Most of the deceased whose names were read aloud during the service were buried at Oatka Cemetery, said Sister of St. Joseph Beth LeValley, a member of the Greater Rochester Community of Churches’ Faith in Action Network, which coordinated the service and has been present at most of the burials.

The network’s accompaniment effort began early last year following news coverage of Sally Green’s burial at Oatka Cemetery without her family being notified, explained Sister LeValley. She realized something more needed to be done for the people who had no family or few friends.

"A few of the people have someone who knew them," added Sister LeValley. "But most of the stories are lost."

Once the group of volunteers began gathering at grave sites, Sister LeValley explained that funeral directors told her that they had been burying residents alone — some in cardboard boxes — for years.

"We in the faith community didn’t know that," she said.

While the Bartolomeo & Perotto Funeral Home has always used wooden boxes with fabric covering — known as grey doeskin caskets — for the burials of those without family or friends, funeral director Joe Bianchi said the interfaith efforts to raise awareness of these burials has helped in several ways.

Area funeral homes will publish death notices, a policy his company did have in place, but also will wait 48 hours before scheduling a burial, Bianchi explained. Most of the burials are at Oatka but some are at Riverside Cemetery, he said.

"This is the new standard," Bianchi said.

The efforts by the volunteers have transformed these burials, which usually were just attended by his staff and Monroe County and cemetery personnel, Bianchi noted.

"It’s been fantastic," he said. "And it’s been a very interesting mix of people who have been coming."

Besides offering their presence, the volunteers at the grave site gatherings realized that this desolate area of the Oatka Cemetery needed landscaping and permanent memorials, added Sister LeValley, as a way to further honor the deceased.

A group of area Eagle Scouts stepped up and are developing service projects to plant bushes and trees in the spring, she said. They also will work on a traveling memorial that can be taken to events or meetings "to remember these people," she added.

To be present for people wherever they are in life is why Vince Pulese said he joined the group.

"I never want people to be alone whether they are well or in ill health or whether they have passed," said Pulese, who has attended several burials. "It’s one thing to live alone but (another) to die alone and be buried alone. You want people to know they have value regardless of whatever happened in their lives. (Their lives) still have purpose and meaning."

Kristin Catalano, director of Isaiah House, who also was at the forefront of raising community awareness of the burials at Oakta Cemetery, said that she was heartened recently to see flowers at the grave site of a burial she attended.

"That says something about this community … that we love enough to make a difference," she said. "God is working through these people. God is always there and we’re never alone."

And God was making the connections to bring together community leaders like Catalano, Sister LeValley and himself to be a presence for these souls, said the Rev. Lawrence Hargrave, pastor of outreach ministries for Asbury First United Methodist Church.

"Kristin and Sister Beth were used by God in that good news," he said.

Once he joined forces with Sister LeValley, he volunteered to be a minister at the burials. One he officiated at Holy Sepulchre Cemetery was for a veteran, which was a special moment for Sister LeValley and himself. With no family to present the folded flag to, the military honor guard present at the burial gave it to her, she said. She had tears in her eyes as the funeral director played "Taps."

"With all of my understanding of how God works, what we have gathered here is more than many of these (deceased) ever expected or anticipated," noted the Rev. Hargrave. "Sometimes, all we have to do is stop and watch how God works."

Tags: Faith in Action, Life Issues
Copyright © 2022 Catholic Courier, Inc. All rights reserved. Linking is encouraged, but republishing or redistributing, including by framing or similar means, without the publisher's prior written permission is prohibited.