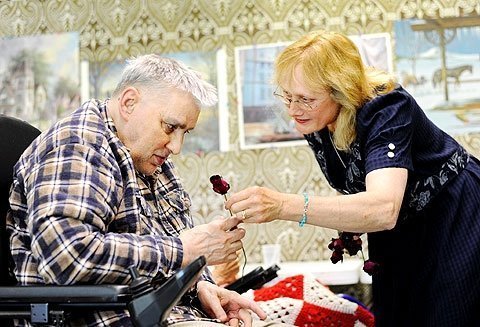 Irondequoit Senior Ministries volunteer Emily Kolb (right) hands a rose to Leslie Richardson, a resident of Shire at Culverton, during a June 5 Communion service at the senior-living community.

IRONDEQUOIT — As she said, "Jesus loves you and so do I," Emily Kolb offered seniors in the auditorium of the Shire at Culverton a hug and a handmade rose following a Communion service June 5.

Kolb is one of a cadre of volunteers from Irondequoit Senior Ministries who visit the adult care home weekly to give residents the opportunity to receive Communion.

"I try to cheer them up through Jesus and the Eucharist," Kolb said following the service. "I think it is the most powerful way to reach people — through Jesus."

For the past 10 years, Irondequoit Senior Ministries, which operates out of an office at Blessed Kateri Tekakwitha Parish, has been reaching out to seniors in the town through the Communion services at least five senior homes, and other services including visitations, transportation, and communications and spirituality programs.

According to the ministry’s staff members, the idea of creating a ministry for seniors that encompassed the entire town was the brainchild of Father Peter Bayer, who currently is director of pastoral care and chaplain for St. Ann’s Community. Father Bayer said the idea grew out of work as part of the pastoral-planning process, as each parish involved in the planning expressed a desire to better serve seniors. He said prior to the creation of Irondequoit Senior Ministries, a small part of staff time at each of the parishes was devoted to senior ministry.

"The energy we’ve been able to generate and the synergism has been a benefit for us," Father Bayer said.

Donna Walker was hired in July 2002 to run the brand-new program. She looked for programs on which to model the senior ministries, but she didn’t find anything. Instead, the parishes identified four initial priorities: creating transportation services, adult faith-formation programs, communication outlets and opportunities for socialization, Father Bayer said.

"We were really starting something from scratch," said Walker, who is pastoral associate for Blessed Kateri Tekakwitha Parish and continues to head the senior ministry.

Walker relied on prayer to open doors and focus groups of Irondequoit seniors, who said they were proud of their parish’s programs, and yet isolated among the community. To respond to this, the senior ministry developed a monthly regional calendar to publicize parish programs among the community. A quarterly newsletter called "Charism" also was developed.

Other programs developed since then, including a popular Lenten speaker series, an AARP driver-safety program, bus trips and a ministry of handmade greeting cards for homebound parishioners. Homebound seniors also are visited routinely by volunteers who offer them Communion, prayer, fellowship and referrals to other services if necessary.

"When we started the visitation ministry to homebound parishioners, it was in recognition that we have people who have given their life to parishes for years, served on committees, raised kids and contributed time and time again," Walker said. "For one reason or another, they are homebound, but they are just as devoted watching Mass on television."

Father Norman Tanck, who was pastor of Blessed Kateri Tekakwitha Parish until June, said Irondequoit Senior Ministries was a big help when five Irondequoit parishes joined together to form Blessed Kateri Tekakwitha Parish in 2010. Rather than each parish having its own separate identity with no history of collaboration, people were already accustomed to working together by the time the parish began working to merge.

"In a sense, they’ve given a model of what can happen and be successful," Father Tanck said.

Now that the five Irondequoit parishes have become one, Irondequoit Senior Ministries is working with the new parish, as well as St. Josaphat’s Ukrainian Church and St. Ann’s Community to plan programs for the future.

"We are in transition, but we are a successful ministry," Gambacurta said. "We know where we are going."

And one of the places the ministry will continue to go is the Shire, where resident Robert Hamilton said he looks forward to the weekly Communion services.

"It gets you out and you can take Communion, and you hear about the word of God, and that’s helpful," said Hamilton, who has lived at the Shire for a year and seven months.

Lori Klafehn, who has been volunteering at Communion services at the Shire for more than a year, said she prioritizes the volunteer work because her mother was ill and unable to leave the house when Klafehn was growing up. Because her mother keenly missed the opportunity to receive Communion, Klafehn said she is grateful to be able to bring it to others. She also is met with gratitude in return.

"They are just so thankful," Klafehn said. "I had no idea when I started this that I would love it so much."

Klafehn, who works in risk management at JP Morgan Chase, has enjoyed the Communion services so much over the past year that she has been volunteering that in January she began bringing her college-age daughter to them as well.

"She gets a lot more out of this than she does out of regular Sunday Mass because it’s more intimate," Klafehn said of her daughter, Julie, a SUNY Brockport student. "You get to know the people."

One of those people that Kolb and Klafehn have connected with is resident Waneta Slyter, who said she is happy when she comes to the Communion service.

After each service, Slyter gathers the volunteers around the altar and prays with them for their safe travels, and that they come back again.