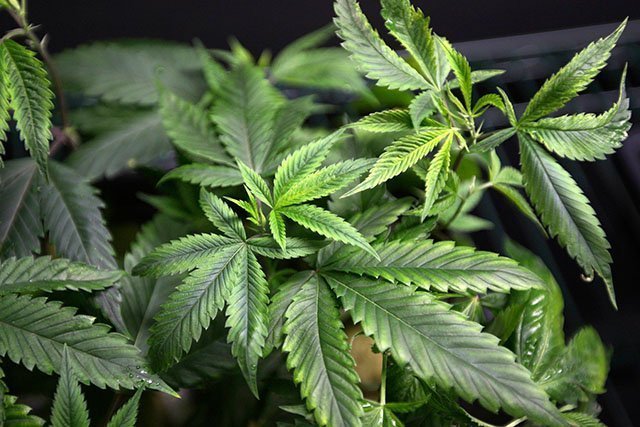 Marijuana plants for sale are displayed at the medical marijuana farmers' market at the California Heritage Market in Los Angeles July 11. Medical marijuana laws have expanded nationally in a relatively short period. As of July 8, Washington state became the second state after Colorado to allow retail sales of recreational marijuana to adults. Voters in two more states will consider legalizing recreational pot in 2014.

WEST PALM BEACH, Fla. (CNS) — When someone close to Teresa Miller developed an addiction to prescription pain medication in 2009, the Florida mom was so distraught she enrolled herself at the University of South Florida.

Miller emerged three and a half years later with a master’s degree in mental health counseling. Miller said she wanted to do everything she could to understand the addiction dilemma and to accompany a loved one — and eventually other parents and families in the community — in navigating what is a daunting crisis.

"I had gone to three different marijuana summits, and so when (medical) marijuana got put on the ballot in Florida, I was dumbfounded and shocked," said Miller, who is a member of Christ the King Parish in Tampa and part of a state now evenly split in its views on legal usage of medical marijuana for residents with a doctor’s prescription.

Nationally, Florida may be on track to be the first Southern state to permit even wider use of medical marijuana if voters approve the Amendment 2 constitutional ballot initiative in November.

Lawmakers had already approved this year the so-called Charlotte’s Web strain of pot developed for patients with seizures, severe and persistent muscle spasms and cancer, but the medicine is low in the mind-altering chemicals found in marijuana.

Moreover, legal pot has become an issue embroiled in the state midterm-election governor’s race and has attracted large financial support from both sides of the issue. Some doubt the support is there for a 60 percent majority to pass a constitutional amendment, but the issue has been rapidly evolving in Florida.

"Many I talked to at church are saying it is helping people and it’s OK," Miller said, who started ReThinkPot.org to tell Floridians that the medical marijuana industry push is largely a foot-in-the-door approach for a profitable, loosely regulated enterprise. She thinks legalization advocates will later try to legalize recreational-use sales, as has happened in other states.

"Over the past years, I have spoken with other parents whose children had died from prescription pain addictions and all those children had used pot, so I feel it is a gateway drug," Miller told Catholic News Service.

This year appears to be crucial for marijuana legalization initiatives, according to Smart Approaches to Marijuana, a national volunteer organization chaired by former U.S. Rep. Patrick Kennedy and which opposes the initiatives. The group cites indications that medical marijuana dispensary drugs too easily end up in the hands of youth.

Voters in Oregon and Alaska will weigh in on a November ballot initiative allowing full recreational marijuana sales, putting those states in line to join Colorado and Washington in legalizing cannabis use despite a federal ban on marijuana sales and possession. Some 23 states and the District of Columbia already allow a form of legal medical marijuana consumption.

In the state of Washington, the sale of recreational marijuana just became legal July 8, when a November 2012 voter-approved ballot initiative took effect. The law allows adults over age 21 to buy up to an ounce. Medical marijuana has been legal in the state since 1998.

In neighboring Oregon, where possession of small amounts marijuana has long since been decriminalized, some deep-pocketed advocacy groups are hoping for full legalization through a November ballot after a previous attempt in 2012 failed.

The U.S. Catholic bishops have not taken position on the medical marijuana debate or legalization specifically. Individual bishops have addressed the issue; and moreover it is up to state Catholic conferences to monitor and lobby for good state legislation.

Todd Cooper, acting representative of the Oregon Catholic Conference in Portland, said his agency is watching the issue and there is already concern that marijuana legally purchased in neighboring Vancouver, Washington, is making its way across the Columbia river into the Portland area — an anecdotal situation reminiscent of states bordering Colorado, now considered the least restrictive state for marijuana consumption.

"As a conference, we are obviously interested in the legislation and support Pope Francis’ ideas in which he said recently that any initiative to legalize drugs should be viewed with suspicion and could add to the (drug addiction) problem," Cooper said. "It’s unfortunate Washington has legalized it and I am afraid it will happen here too. I am concerned about effects on family life, on our youth in particular."

In Florida, where as yet the bishops have not yet taken sides on medical marijuana ballot initiative, the issue is being studied but as with most states the church here has stayed neutral thus far, according to Mike Sheedy, director of the Florida Catholic Conference in Tallahassee.

"In most places, conferences have been neutral, but experiences in states that have adopted medical marijuana have seen results that were negative and unanticipated," Sheedy said, noting that the nonpartisan Florida Sheriffs Association has an educational campaign opposing the amendment.

In principle, it is hard to argue with physicians providing solutions to patients that would be helpful and legal marijuana derivatives that have gone through the Federal Drug Administration process would impart some confidence on its efficacy, Sheedy said.

"But with grown marijuana, you don’t know the potency and what the (end product) is going to be," he said, in reference to marijuana edibles or highly potent products that are thought to have caused an increase in emergency room visits and other mishaps among users in Colorado.

"Perhaps medical marijuana is a misnomer because it is not going through a normal pharmaceutical process," he said.

At the federal level, marijuana remains classified as a Schedule I substance under the Controlled Substances Act, meaning it is considered to have a high potential for dependency and no accepted medical use, making distribution a federal offense although the U.S. Justice Department has largely not interfered in many of the new state sales operations.

To Father Tadeusz Pacholczyk, director of education at the Philadelphia-based National Catholic Bioethics Center and a priest of the Diocese of Fall River, Massachusetts, it seems "the medical uses of marijuana are limited, and that other medical modalities need generally to be exhausted prior to adverting to medical marijuana."

"Strict controls on distribution with ongoing recertification of medical need by medical professionals also seems necessary to prevent abuses," he told CNS in an email.

Asked how parents — and Catholics in general — can better educate themselves about marijuana, he said that when recreation pots is legalized, "it will require extra effort and commitment on the part of parents to dissuade their children from trying marijuana."

He sees the need for "frank discussions about the various medical dangers, along with education about what an unsatisfying human choice it is to run away from our problems by ‘getting high.’"

"Often the attempt to escape through drugs," he added, "is a proxy for the other issues in a teen’s life — poor family dynamics, loneliness, wanting to belong to a group, feeling rejected, misunderstood, etc."