Walk in solidarity with refugees at Christmas - Catholic Courier 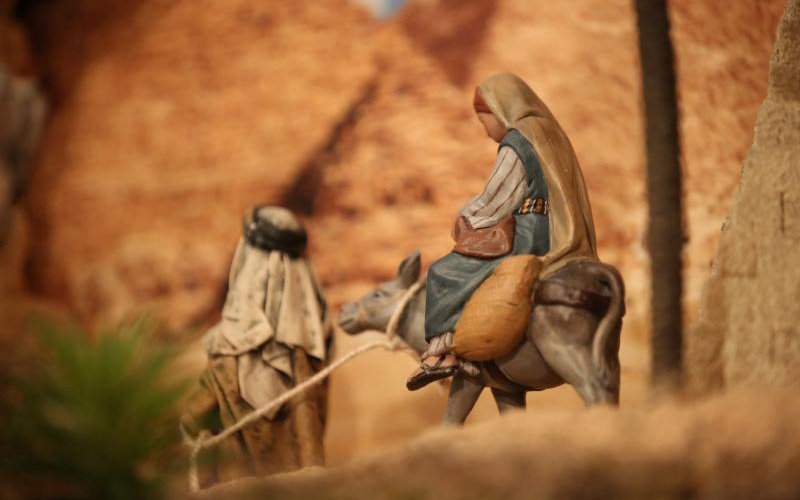 Figures of Mary and Joseph fleeing to Egypt after the birth of Jesus are seen in a display created by Father Alberto Curbelo at St. Francis de Sales Church in St. Paul, Minn.(CNS photo by Dave Hrbacek/The Catholic Spirit)

Sometimes overlooked in the idyllic images of the Christmas story is the brief, touching tale told in the Gospel of Matthew: the flight of the Holy Family into Egypt.

The plight of our world on the move calls us to pray with and act upon this account of Jesus fleeing as a refugee to a foreign land.

Today, one in every 108 individuals has been forcibly displaced, according to the United Nations. By the end of 2018, that translated to 70.8 million forced to leave their homes due to persecution, conflict, violence.

Numbers tend to numb us. There’s a saying: One death is a tragedy, a thousand deaths is a statistic. The body of a fleeing child washed up on the shores of the Mediterranean or the Rio Grande captures our heart. But those individual tragedies are soon overwhelmed by staggering statistics.

What can we do?

Sarah Carroll, a spokesperson for Jesuit Refugee Service, said the organization works with displaced people in 56 countries and sees their mission as one of accompaniment.

“We see our clients as our companions on our journey,” she said. “The idea of being present is a big piece of our work.”

Indeed, presence is an important Catholic concept, one that calls us to journey with someone rather than place ourselves in a position of superiority.

The idea of compassion — literally to suffer with — is at the Gospel’s heart. Jesus stood with people on the margins. He ate with sinners, embraced the leper, conversed with the Samaritan woman, healed the blind beggar.

So, the journey into Egypt fits entirely with the message of Jesus, who later said, again in Matthew, “I was a stranger and you welcomed me.”

Joseph was alerted by an angel to the peril his family faced from Herod, himself informed by the Magi that a child had been born who would one day rule Israel. Joseph, like millions of refugees today, fled the persecution and violence of an authoritarian ruler to seek safety for his family.

We see Jesus himself at the margins, one with the poor. He returned to his country only when Joseph was sure that Herod was dead.

Jesuit Refugee Service was founded in 1980 when Father Pedro Arrupe, then-superior general of the Society of Jesus, recognized the growing number of displaced people and the call for the church to walk in solidarity with them. Today, JRS works to assist with the social, health and educational challenges of refugees, encouraging self-determination.

“St. Ignatius, founder of the Jesuits, was himself a pilgrim,” said Carroll. And although refugees are “on a perilous journey, one they did not choose,” Carroll sees those of us who walk with them as choosing a pilgrim’s way.

During this special season, a first step toward accompaniment with the displaced would be to place ourselves within the story of the journey to Egypt. Imagine leaving under cover of darkness to a foreign place, one with strange words and customs. Imagine the fear that drove you to this place of refuge, and the anxiety of separation from your own home.

What is the meaning of the Gospel that shows us Jesus, from childhood to the point of his humiliating and ignominious death, always walking with the poor?

Next, we ask how we can assist a world on the move.

The U.S. Conference of Catholic Bishops is one of nine designated nongovernmental organizations that helps with refugee resettlement in the U.S., and much of this work is done through local Catholic Charities.

Through organizations like JRS and Catholic Charities, we can walk with Jesus at the margins.