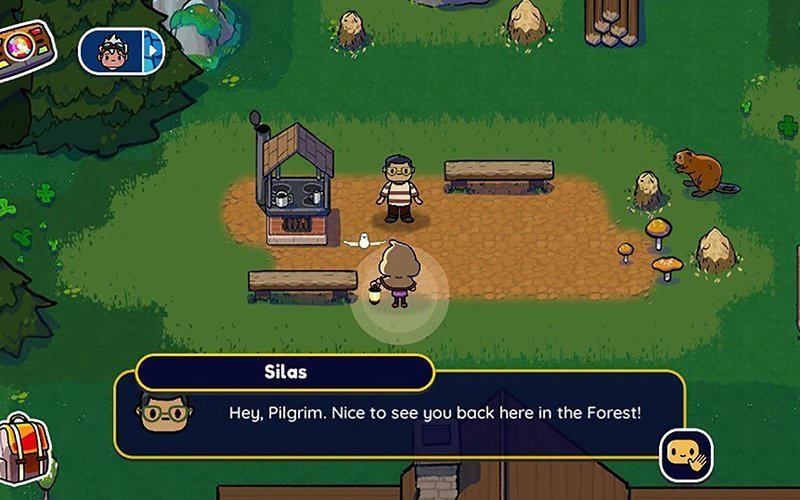 This is a scene from the video game "Wanderlight." The Catholic News Service classification is A-I -- general patronage. Not rated by the Entertainment Software Rating Board. (CNS photo by Loyola Press)

NEW YORK (CNS) — Faith formation receives a new educational tool in “Wanderlight,” Loyola Press‘ first foray into the world of video games. By taking up the lantern of a persona called the Pilgrim, players 11 or younger embark on an adventure enabling them to learn more about the church and its creed.

The Pilgrim is depicted as gender-neutral, but the skin tone and tunic color are both customizable for a slightly more personalized experience.

While journeying toward the home of the Pilgrim’s godparents, gamers go on missions across seven different levels of play. They help people in the community and deepen their relationship with God. Players also encounter priests, nuns and different biblical figures as well as such notable saints as Francis of Assisi, Ignatius Loyola and Frances Xavier Cabrini.

“Wanderlight” also highlights the role Catholics have played in the advancement of secular knowledge by featuring laypeople who work in the fields of science and technology.

There are three separate regions in the game, the Valley, the City and the Forest. Players start off in the first of these and must make their way to the dwelling of the Pilgrim’s godparents in the last.

Each quest involves a lesson in faith, concerning the virtue of meekness, for example, and what it means to demonstrate that quality in everyday encounters — whether with people or some pesky raccoons. Another mission centers on stewardship of the Earth and the need to care both for the environment and for immigrants in need of refuge.

If an objective is passed over, it will light up with an exclamation point, which is beneficial for younger gamers who may miss small details. A guiding dove, serving as the embodiment of the Holy Spirit, will also coo when the Pilgrim is near something of interest.

If players need to take a break or want to look at records of their progress, the Pilgrim enters the Prayer Tent. This structure contains various stations that, when clicked, guide the Pilgrim through various devotions.

One particularly helpful mechanic is the sparkling glow, which will appear to guide the Pilgrim in the right direction. If children get confused about where they need to go, this path lights the way.

All dialogue is also available in text and voiceover, making the game even more accessible to children who have not yet learned to read.

This title’s primary flaw is the extreme ease of its different levels. As a result, “Wanderlight” may prove less than sufficiently challenging for older kids.

Developed both for individual use and for groups, “Wanderlight” can be played on tablets or computers, but not mobile devices. The classroom edition, developed up to sixth grade, also comes with administrative licenses and reporting capabilities, which is useful for at-home online learning. An internet connection is required for play.

Tags: Game Reviews
Copyright © 2023 Catholic News Service, Inc. All rights reserved. Linking is encouraged, but republishing or redistributing, including by framing or similar means, without the publisher's prior written permission is prohibited.