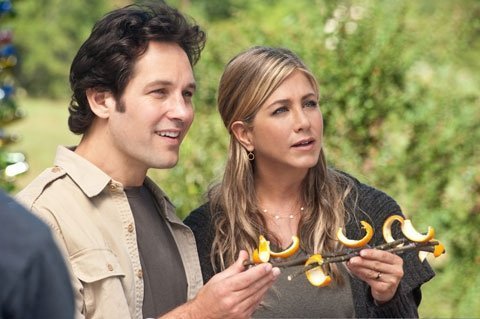 NEW YORK (CNS) — When one of the lead characters in “Wanderlust” (Universal) asks rhetorically why he can’t seem to go more than a short period of time without another man’s private parts being waved in his face, he might as well be speaking on behalf of viewers.
¬†
For a gauntlet of such childish attempts to shock, as well as relentless lashings of tawdry language, await in director and co-writer David Wain’s insubstantial and distasteful comedy.
¬†
The proceedings center on young New Yorkers George (Paul Rudd) and Linda (Jennifer Aniston), unremarkable urbanites who — through a convoluted plot point — find themselves living in a hippie commune lifted straight out of the 1970s.
¬†
They have stumbled on Elysium, a rural community where drugs, free love and an absence of boundaries are the order of the day.
¬†
The picture does provide some amusing moments, and its relatively pleasing wrap-up affirms the beauty of monogamy. However, this acceptable conclusion is preceded not only by the above-cited gross-out humor, but by an incident of adultery treated more like a harmless mistake than an assault on the bonds of marriage. In sum, the script, penned in collaboration with Ken Marino, demeans human sexuality far more than it celebrates loving fidelity.
¬†
The film contains strong sexual content, including full nudity and explicit vulgar dialogue, adultery theme, drug use, occasional profanity, frequent rough and some crude language as well as an obscene gesture. The Catholic News Service classification is O — morally offensive. The Motion Picture Association of America rating is R — restricted. Under 17 requires accompanying parent or adult guardian.
¬†
– – –
¬†
Shaw reviews movies for Catholic News Service.