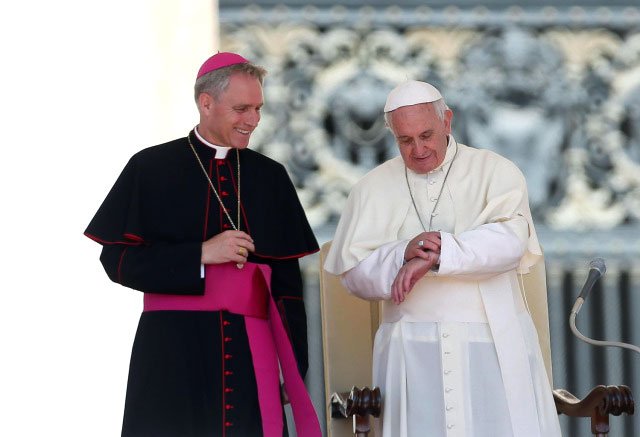 Pope Francis looks at his watch next to Archbishop Georg Ganswein, prefect of the papal household, during the pontiff’s weekly audience in St. Peter’s Square June 3.

VATICAN CITY (CNS) — Families are weakened and destroyed by war, "the mother of all forms of poverty," as well as by economies and policies that worship money and power, Pope Francis said.

"It’s almost a miracle" that, even in poverty and crisis, the family can keep on going, safeguarding its bonds and staying intact, he said at his weekly general audience in St. Peter’s Square June 3.

Leaders who consider family ties and affection as something peripheral to the quality of life "don’t understand a thing," he said. "Instead, we should kneel before these families, who are a true school of humanity, who are saving society from barbarity."

Continuing a series of talks about the family, the pope began a new chapter addressing the various social conditions and problems that put today’s families to the test.

The pope began by focusing on the hardship of poverty, which is further aggravated by war.

"War is always something terrible," he said, as it is "a great predator of lives, of souls and the most sacred and dearest of attachments."

But despite such difficulties, there still are many poor families who are able to live "with dignity, seeking to live their daily life" and placing their trust in God, the pope said.

The ability of some poor families to persevere, "however, must not justify our indifference, but, if anything, increase our shame that there is so much poverty," he said.

"What are we left with, in fact, if we give in to the extortion of Caesar and Mammon, of violence and money, and we also reject familial attachments?" he asked.

Healthy families are the "mainstay" of healthy individuals and communities, he said, so if that cornerstone is removed, "everything collapses."

"Today’s economy often specializes in the enjoyment of individual well-being, but widely practices the exploitation of family relationships. This is a serious contradiction," he said, criticizing economic and political experts as being "stingy" in not recognizing or including the "enormous work of the family" in their analyses and balance sheets.

"A new civil ethics will come about only when those responsible for public life reorganize social bonds starting with the fight against the perverse spiral" of poverty, he said.

Fighting poverty is not just a matter of families getting "bread" on the table, the pope said; it is about having jobs, stable employment, education, health care, housing and transportation.

The conditions found in poor neighborhoods and "the reduction of social services — health care and schooling — cause further difficulties" for families, he said.

Spread by the mass media, "fake models" of the family based on "consumerism and the cult of appearance" also harm families, he said, and have a greater impact on poorer families and increase the breakdown of family ties.

The church and its members are called to heal families and fight poverty, he said.

By becoming "poor" and practicing simplicity, the pope said, the church can break down "every wall of separation, especially from the poor" and become more effective in responding to poverty.

Pope Francis called on Christian families to pray and act on behalf of those in need, and join "this revolution" of drawing near to families, "which is so needed now."

He asked those gathered in the square to listen carefully and think of a disadvantaged family they knew as he reread a passage from the Book of Sirach (4:1-6) that had been read at the start of the audience.

The verses tell people not to mock, anger or reject the poor, but to relieve them of their burdens.

The poor will be the first to judge those who ignore their cries, he said, followed by God’s judgment and curse "if we don’t do these things" commanded in the Gospel.

The text of the pope’s audience remarks in English is available online at www.vatican.va/holy_father/francesco/audiences/2015/documents/papa-francesco_20150603_udienza-generale_en.html.

The text of the pope’s audience remarks in Spanish is available online at www.vatican.va/holy_father/francesco/audiences/2015/documents/papa-francesco_20150603_udienza-generale_sp.html.