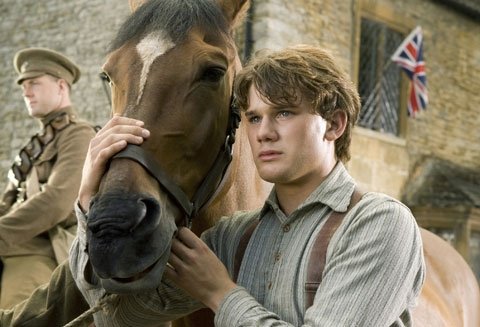 NEW YORK (CNS) — “War Horse” (Disney) is director Steven Spielberg’s epic screen version of Michael Morpurgo’s 1982 novel, the stage adaptation of which has proved a critical and popular success both in London and on Broadway.
¬†
Despite Morpurgo’s tenure as the U.K.’s official children’s laureate, though, Spielberg’s vast canvas makes unsuitable viewing for kids — because of the intensity of the onscreen drama, the level of violence in scenes of World War I fighting and some of the vocabulary used in screenwriters Lee Hall and Richard Curtis’ script. Mature audience members, on the other hand, will encounter a stirring affirmation of human solidarity amid the tragedy of the trenches.
¬†
Ironically, this realization of shared values is brought about by the heroism and endurance of the film’s nonhuman protagonist, the titular equine.
¬†
We first meet the thoroughbred — who eventually acquires the sobriquet Joey — while he’s in the auction pen of a small English town. There he sets off a bidding war between the local squire (David Thewlis) and one of his tenants, farmer Ted Narracott (Peter Mullan). Though he can neither afford nor use the animal, Ted stubbornly outbids his overbearing landlord just to thwart him.
¬†
When Ted brings Joey home, his good-hearted but timid wife Rosie (Emily Watson) is appalled; his teenage son Albert (newcomer Jeremy Irvine), by contrast, is delighted. Albert insists that he can transform Joey into a working horse, capable of plowing the fields. Though he eventually does so, with the onset of the Great War, continuing economic pressures prompt Ted to sell Joey to Captain Nicholls (Tom Hiddleston), an army officer bound for the Western Front.
¬†
This initiates a series of adventures and trials that are, by turns, touching and harrowing. The horrors to which Joey is subjected will likely make the substantial portion of the movie that follows a difficult slog for animal lovers, while those indifferent to our furry, feathered or hoofed friends will hardly be drawn to this tale in the first place.
¬†
But those who imitate Joey by persevering through it all will find themselves rewarded with a positive message based on humanistic values.
¬†
The film contains considerable combat and other violence, including an execution; about a half-dozen uses of crass language; and a few vague sexual references. The Catholic News Service classification is A-III — adults. The Motion Picture Association of America rating is PG-13 — parents strongly cautioned. Some material may be inappropriate for children under 13.
¬†
– – –
¬†
Mulderig is on the staff of Catholic News Service.