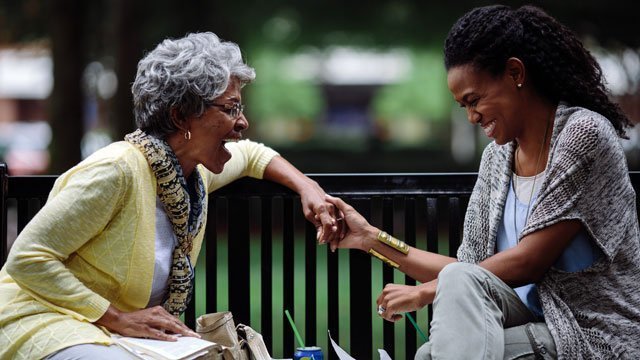 Karen Abercrombie and Priscilla Shirer star in a scene from the movie "War Room." The Catholic News Service classification is A-II -- adults and adolescents. The Motion Picture Association of America rating is PG -- parental guidance suggested. Some material may not be suitable for children.
By Joseph McAleer
Catholic News Service
NEW YORK (CNS) — Prayer becomes the ultimate weapon to save a young family in crisis in "War Room" (TriStar). This Christian-themed drama is the latest offering from Alex and Stephen Kendrick, the fraternal team behind 2008’s "Fireproof" and 2011’s "Courageous."
A McMansion in suburban North Carolina serves as the film’s battleground. There, overtaxed wife and mother Elizabeth Jordan (Priscilla Shirer) finds that the demands of her job as a real estate agent leave her little time to focus on raising her daughter, Danielle (Alena Pitts).
Elizabeth’s ambitious but inattentive husband, Tony (T.C. Stallings), isn’t much help. His work as a salesman keeps him on the road where sinful temptations lurk, including opportunities to be unfaithful.
When Tony does come home, he and Elizabeth do nothing but argue. Frustration and depression take their toll on the family until the Jordan residence resembles an emotional war zone.
Riding to the rescue is elderly but feisty local character Miss Clara (Karen Abercrombie), who just happens to be selling her house. Elizabeth pays a visit and, as the coffee is served, pours out her heart, revealing her bitterness. Not one to beat around the bush with a perfect stranger, Clara, in response, immediately insists on a battle plan.
Clara shows Elizabeth her favorite hideaway: a walk-in closet, empty except for the letters, notes and photographs taped to the walls. "I call it my war room," Clara explains. Here Clara develops a "prayer strategy" for calling on God and seeking his grace.
"Give me one hour a week and I will teach you how to fight the right way with the right resources," Clara promises. "It’s time for you to take off the gloves and fight for your marriage."
We follow Elizabeth’s metamorphosis as she reads Scripture and posts prayer requests in her own empty closet. In a transformative moment, she storms through her home, denouncing Satan. "This house is under new management!" she proclaims. "You go back to hell where you belong and leave my family alone!"
Slowly but surely, the heaven-sent healing begins. A symbolic turning point comes at the dinner table, when Tony — taking his cue, no doubt, from Claude Rains’ sudden distaste for Vichy water at the conclusion of "Casablanca" — sets aside a bottle of his favorite brand of hot sauce, "Wrath of God."
Needless to say, subtlety is not the armament of choice in this cinematic crusade, and the proselytizing can be heavy-handed at times.
But the brothers’ intentions — Alex directed, while Stephen collaborated with him on the script — are obviously sincere and worthy. And, though they approach their subject matter from an evangelical viewpoint, their emphasis on piety, forgiveness and redemption is, of course, fully compatible with Catholic teaching.
The film contains mild domestic discord and some mature themes. The Catholic News Service classification is A-II — adults and adolescents. The Motion Picture Association of America rating is PG — parental guidance suggested. Some material may not be suitable for children.
– – –
McAleer is a guest reviewer for Catholic News Service.
Copyright © 2022 Catholic News Service, Inc. All rights reserved. Linking is encouraged, but republishing or redistributing, including by framing or similar means, without the publisher's prior written permission is prohibited.