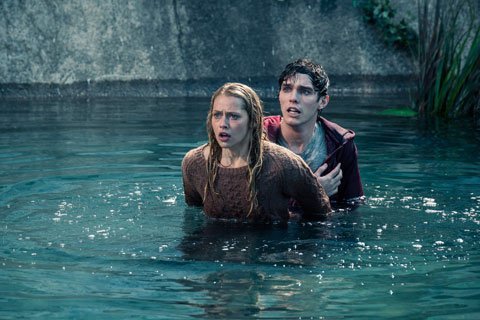 NEW YORK (CNS) — Wouldn’t classic love stories like Shakespeare’s "Romeo and Juliet" be all the better if zombies were thrown into the mix?

Agree or disagree, that’s the basic thrust of director and screenwriter Jonathan Levine’s "Warm Bodies" (Summit) — an oddly touching picture based on Isaac Marion’s novel of the same name. Unusual for its genre, this monster mash goes light on the gore, and contains a surprising number of Christian-friendly themes.

The premise is as old as boy meets girl … well, nearly. A mysterious virus has turned vast hordes of humanity into flesh-eating monsters, and those who have remained human are camped out in hastily built fortresses.

One of the undead, known as R (Nicholas Hoult), finds he’s able to think semi-rationally, and even curb some — but not, at first, all — of his brain-munching instincts. He grapples with this realization as he comes across the very-much-alive Julie (Teresa Palmer). Somewhat inauspiciously, R initially spies Julie while he’s ingesting her boyfriend, Perry (Dave Franco).

Nonetheless, on a whim even he finds surprising, R rescues Julie from certain death at the hands of his hungry companions. He then keeps her safe and fed, and also entertains her with the collection of vinyl records he preserves in the grounded plane that serves as his base.

As his relationship with Julie blossoms, they both come to recognize that R is becoming more and more human with each passing day. And he might not be the only zombie to be affected by this phenomenon. It’s a process that begins with the emotional stirrings of the once-flatlined heart, and may end in a fully restored life.

The couple must use their newfound knowledge to try and reconcile the zombie gangs with the militaristic humans, the latter led by Julie’s father, Gen. Grigio (John Malkovich). This task is all the more urgent because a new enemy threatens both groups: So-called "Boneys" — zombies in the last stages of decay who roam the earth as evil skeletons.

Redemption, in Levine’s script, comes through love, whether it be R’s deepening feelings for Julie or other zombies’ recollections of their beloved families. Those who have no such reaction, by contrast, are consigned to torment as their need for flesh consumes them.

R initially believes he has no choice but to follow his base cannibalistic desire. But once he meets Julie, he discovers that, while the temptation to do so is still strong, he is able to resist it in order to become a better — more fully alive — person.

R’s restraint in the pursuit of virtue may represent an unusual version of asceticism. Yet, by analogy at least, it certainly stands in contrast to the prevailing message of contemporary society that happiness can be found by pursuing — and satisfying — every materialistic or bodily urge.

However remotely, given the context, R’s discovery that self-denial can result in our becoming more human — and better able to care for those we love — does echo Jesus’ exhortation to take up the cross and follow him.

The film contains some restrained gory violence, occasional profanity, at least one instance of rough language and about a half-dozen crude terms. The Catholic News Service classification is A-III — adults. The Motion Picture Association of America rating is PG-13 — parents strongly cautioned. Some material may be inappropriate for children under 13.