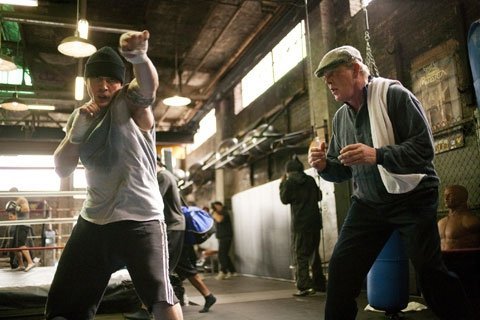 NEW YORK (CNS) — "Warrior" (Lionsgate) might appear to be a close relation of mindlessly bellicose fodder such as "Conan the Barbarian," the exploitative retread unleashed by Lionsgate earlier this summer. In truth, "Warrior" is a poignant, well-acted sports drama about fraternal discord and ties between fathers and sons.

To be clear, "Warrior" features moments of bone-crunching violence in the context of mixed martial arts competition, so it’s not for those who can’t watch boxing movies. Nevertheless, the pugilism is not especially graphic and long before the final bell rings, the violence has been eclipsed by genuine pathos. The sport’s brutality is used to illustrate values and themes often explored in mythology, classical tragedy and more than a few Bible stories.

Returning home to hardscrabble Pittsburgh after a long absence that included a tour in Iraq, U.S. Marine Tommy Conlon (Tom Hardy) finds that his father, Paddy (Nick Nolte), has stopped drinking thanks to a 12-step program and a rediscovery of his Catholic faith.

Fourteen years earlier, fearing for their welfare, Tommy fled with his now-deceased mother. Coached by the volatile Paddy, once a Marine himself, Tommy had been a champion wrestler. Now angry, anguished and cynical, he learns that the old neighborhood gym has become a hotbed of MMA, an increasingly popular sport (also known as ultimate fighting) that combines elements of boxing, Brazilian martial arts and wrestling. Seeing an outlet for his rage, Tommy takes it up and, reluctantly, asks Paddy to be his trainer.

Meanwhile, his older brother Brendan (Joel Edgerton), also estranged from Paddy, is a high school physics teacher near Philadelphia. Married with two young daughters, he faces foreclosure on his home and, unbeknownst to wife Tess (Jennifer Morrison), competes in unsanctioned MMA matches to earn cash. Brendan had a middling career on the professional circuit and, after trouble at work, returns to fighting full time.

As fate would have it, both siblings enter a high-profile event in Atlantic City featuring the world’s top MMA fighters. Whoever is left standing at the end of the single-elimination tournament will win $5 million. Since Tommy uses his mother’s maiden name, no one knows he and Brendan are brothers. He also harbors a secret stemming from his service in Iraq.

Unlikely though it may be — and as movie-inevitable as the plotting is — the extreme fraternal fracas "Warrior" builds toward is an affecting means of expiation and reconciliation. While Paddy seeks forgiveness and a second chance with his sons, they crave affirmation.

Director and co-screenwriter Gavin O’Connor plumbed similar material in two earlier films. His gritty "Pride and Glory" concerned two brothers who followed their father into the NYPD; and 2004’s "Miracle" was an inspirational underdog sports drama about the 1980 U.S. Olympic hockey team. Here he conveys deep-seated feelings without an excess of dialogue, exposition or overly detailed back story. Adopting a spare, deliberate style, he forgoes explicating or glamorizing MMA in favor of depicting broken relationships. His characters aren’t especially articulate, saying more with their bodies and facial expressions than with their words, and the movie couldn’t succeed without strong performances from Hardy, Edgerton and Nolte.

It’s impossible to completely isolate the emotional core of "Warrior" from the brutality of MMA (the referee begins each match by exhorting the two combatants, "Let’s go to war!"). Because it tacitly approves of violence as a means of dealing with conflict, "Warrior" is only suitable for selected viewers. Yet its visceral embodiment of the power of love and forgiveness saves it from being morally offensive. In addition to intense boxing violence, the film contains much crude language, some profanity, one use of rough language, brief sexual innuendo and some alcohol abuse.

The Catholic News Service classification is L — limited adult audience, films whose problematic content many adults would find troubling. The Motion Picture Association of America rating is PG-13 — parents strongly cautioned. Some material may be inappropriate for children under 13.