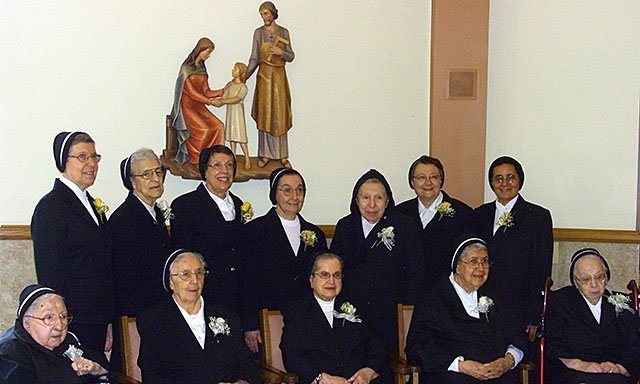 Sister Elizabeth Arcangeli and Sister Margaret Franzese, natives of Watkins Glen, were among several sisters in the Religious Teachers Filippini to celebrate 75th and 50th anniversaries of their vocation to consecrated life.

In preparation for their Diamond and Golden Anniversary, the Jubilarians assembled for a day of prayer on Friday, October 11, 2013 at Villa Walsh in Morristown, N.J.  The Jubilarians were very privileged to have as their retreat director Rev. John Gordon, the Parochial Vicar at Holy Family Parish in Nutley, N.J.

On Saturday, October 12, in the Saint Lucy Chapel, the Diamond and Golden Jubilarians, together with family and friends, shared in a Eucharistic celebration of thanksgiving of 75 & 50 years of religious commitment. The Most Rev. Arthur J. Serratelli, Bishop of Paterson was celebrant and homilist.  The Most Rev. Dominic Marconi presided and many priests, friends of the Jubilarians, concelebrated.