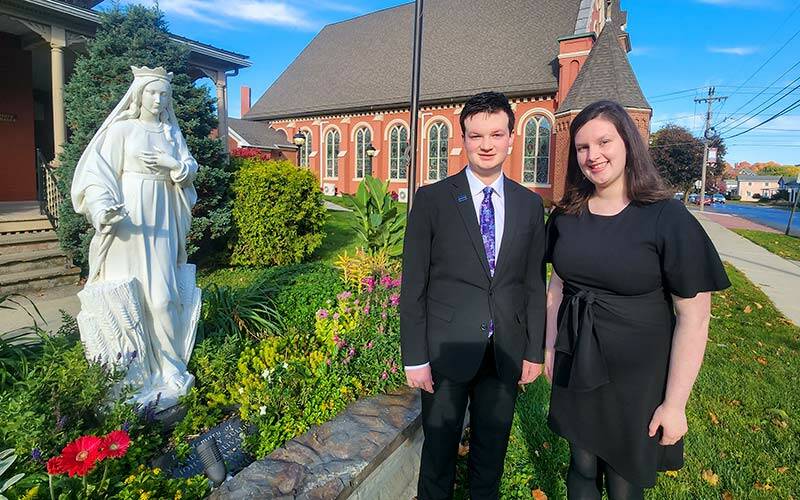 WATKINS GLEN — Not very long into her young life, Bella La Face knew she was destined for church involvement beyond simply attending Mass.

“When I was 8, I remember watching the altar servers and saying, ‘I want to do that.’ I felt called to it,” said Bella, now 18.

She not only became an altar server but has eagerly served in other volunteer duties at Schuyler Catholic Community. Along the way, her only sibling — 16-year-old Giuseppe — has come to follow a similar path.

Starting out as altar servers, the La Faces in recent years have taken on duties more commonly held by adults. Bella is currently a lector, and Giuseppe serves as both an usher and a videographer for Sunday Masses at St. Mary of the Lake Church. In addition, their high level of commitment has led both to serve in the distinguished role of youth representative to the Schuyler cluster’s parish council.

Bella and Giuseppe said their primary role as parish council members has been to offer input on behalf of their peers, sharing perspectives on how to engage young people more fully in parish life. For instance, Bella recalled that during her time on the council, she suggested that St. Mary of the Lake’s music ministry add a more youth-friendly approach to its repertoire.

The siblings said they’re pleased that they’ve been treated like adults by other members of the parish council.

“They always ask what we feel about the issues and are very accepting,” Giuseppe said. “We have a voice.”

“I felt like every opinion I had, I could voice it freely,” Bella added.

Bella and Giuseppe credit much of their parish involvement to the ways their parents, Frank and Robin, have lived out their Catholic faith over the years.

In addition, she and Giuseppe noted that Father Steven Lape, pastor of Schuyler Catholic Community from 2014-21, consistently invited them to become more involved. Father Lape is now pastor at Parish of the Holy Family in Gates.

The siblings continue to be active under Father Jeffrey Tunnicliff, Schuyler Catholic Community’s parochial administrator since 2021. Rosemary Nabogis, who serves as pastoral minister for the cluster, noted that Bella strives to maintain her volunteerism even though she’s now in college.

“Both are delightful and helpful, and I hope an inspiration to others,” Nabogis said of the sister-brother duo.

Bella and Giuseppe said they’re aware of their potential to inspire, particularly among fellow youths. Bella expressed concern about dwindling youth involvement in the Catholic Church as a whole, saying it’s vital for more of her peers to become involved in church life.

“Without them, there will be less adults coming over the years,” she remarked.

“Our goal is to bring those kids back,” Giuseppe added. He said the example he and his sister set can encourage other youths who are interested but hesitant to step forward. “I think sometimes you have to be the first person for others to follow,” he said.

Giuseppe emphasized that “there are many, many opportunities” for church involvement by teens: “You don’t have to do one certain thing.” Whereas he enjoys videography and ushering, for example, Bella’s interests lean toward lectoring, volunteering at the parish soup kitchen and assisting at the holiday bazaar coming up Nov. 19 at St. Mary of the Lake’s parish center.

Even more important than parish volunteerism, they said, is having a strong personal faith to guide youths through the many ups and downs of adolescence and young adulthood.

“You would struggle if you didn’t have any faith,” Giuseppe remarked.

“God is always there with you,” Bella said. “You don’t need to see or hear him. You just know.”

Tags: Profiles in Faith, Schuyler County News
Copyright © 2022 Catholic Courier, Inc. All rights reserved. Linking is encouraged, but republishing or redistributing, including by framing or similar means, without the publisher's prior written permission is prohibited.