Waverly is proud of its windows - Catholic Courier 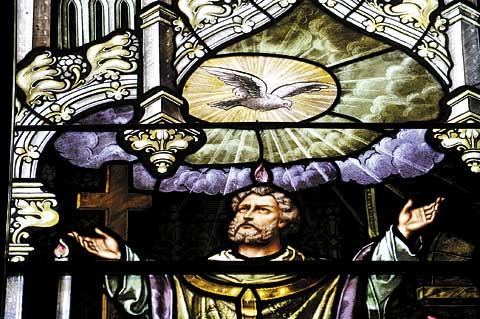 One of the stained-glass windows being refurbished at St. James Church in Waverly.

Should you have the occasion to attend Mass at St. James Church in Waverly, be prepared to view "the most spectacular Resurrection window you will ever see in your life," according to Laura Hoppe, a longtime parishioner. "You can almost see the Roman guards shivering and quaking."

Another stained-glass window offers a vivid rendering of Mary’s visitation with Elizabeth: "You can see every wisp, every strand of hair on the Blessed Mother’s head clearly depicted," Hoppe said.

For nearly 100 years, St. James’ windows have proudly featured the Munich-style stained glass that is renowned for this kind of lavish imagery and detail.

"They take your breath away; they literally are sermons in glass. It would have been a shame to see them not maintained," Hoppe said.

Apparently many people agree with her, as evidenced by the strong parish and community financial support in having all the windows refurbished. Begun in 2006, the restoration project has only 10 small windows to go and is on track to reach its completion goal of 2012 — in time for the building’s 100th anniversary in 2013.

Approximately 50 colored windows — two-thirds of which are crafted in Munich style — adorn the Tioga County church. Hoppe, a member of St. James’ window restoration committee along with George Howell and Tammy Ovedovitz, said the project grew out of the discovery of a single window that was "terribly deteriorated," worn down by heavy exposure to sunlight. Parish leaders subsequently discovered that all the windows were in need of restoration. Although the glass itself was still in good shape, the lead joining the glass pieces had weakened considerably. This type of lead has a typical life span of approximately 100 years.

J & R Lamb Studios Inc. performed the initial phase of the restoration, and Ma’s Glass & Art Studio has done all the refurbishing over the past three years. Both firms are based in New Jersey. As its $300,000-plus price tag might indicate, the restoration project has been an elaborate undertaking. This tedious process begins with removal and disassembly of windows that each contain numerous pieces of glass. The stained glass is cleaned, new lead is applied and the pieces are soldered back into place. Special care is made to maintain the windows’ original designs and colors.

Munich glass originated in Germany in the 19th century. Hoppe observed that this style’s attention to detail extends right on down to eyelashes, eyebrows and skin tones.

"It’s like you’re in a museum of art and see these masterpieces. You could look at those windows 10 times in a row and could see something different," she said.

For example, one rendering of Mary features a small white cross piercing her heart that is not readily apparent: "We usually see her heart surrounded by roses. The sorrowful heart of Mary is a less common depiction," Hoppe said.

St. James holds regular Sunday Masses at 5 p.m. Saturday and 9 a.m. Sunday. The refurbished windows also served as a stirring backdrop for a recent special event — a liturgy on Aug. 11 in support of widows and widowers. The Mass drew 24 people from St. James as well as the three other churches making up Blessed Trinity/St. Patrick parishes: St. Patrick, Owego; St. John the Evangelist, Newark Valley; and St. Margaret Mary, Apalachin.

Hoppe said the project’s final cost will be approximately $310,000. Financing has been bolstered by such resources as the diocesan Partners in Faith capital campaign, proceeds from the sale of the St. James School building and a $5,000 grant earlier this year from the Mildred Faulkner Truman Foundation of Owego. Hoppe oversees an ongoing bottle-and-can drive that will ultimately net close to $10,000, and also has raised funds by collecting used printer cartridges and cell phones for recycling.

Individual parishioner contributions have had the biggest impact: "Our major source of funding has been people," Hoppe said, noting that nearly all the windows have sponsors. Donations are still being accepted and may be sent to St. James Church, 503 Clark St., Waverly, NY 14892, c/o the window restoration fund.

"Everyone has been pleased with the appearance and project in general," Hoppe said. "I think I would fairly say the people take a tremendous amount of pride in St. James Church and they’ve always stepped up when something needs to be done. We have a very tight-knit family."

Father William Moorby, pastor of Blessed Trinity/St. Patrick, noted that the current St. James Church was built in 1911 to replace one that had been destroyed by fire.

"I am sure the parishioners were delighted that out of the ruins and ashes of their old church such a magnificent church was built, with the windows being the final touch of beauty. In spite of the fire, the church would endure," he observed.

One century later, Father Moorby sees the window refurbishing as a modern-day symbol of endurance.

"When St. James went through the pastoral-planning process, I think that many parishioners wondered if their church would close," he acknowledged. "When the windows began to be restored and the light of day began to illuminate their beauty, I believe that the people of St. James came to see that their church would endure. The windows became a sign of new hope and new life."