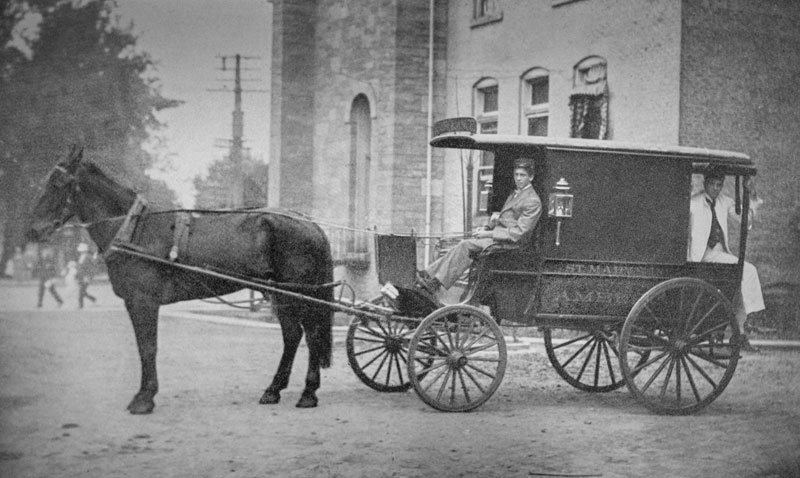 A late-1800s photo of one of the first ambulances used by St. Mary's Hospital in Rochester.

The Catholic faith was first proclaimed in western New York by French Jesuit missionaries in the 17th century. But it wasn’t until the next century, in 1789, that Pope Pius VI established the first U.S. diocese in Baltimore, Md. This premiere see covered all of the new nation, then spanning the entire territory east of the Mississippi River except Florida and the coasts of Louisiana, Mississippi and Alabama.

Waves of European immigrants had begun to populate the new nation, bringing their Catholic faith and practices with them. By 1847, a new Buffalo diocese was shaped from New York’s westernmost counties. The original Buffalo See included all 12 counties that today constitute the Diocese of Rochester.

In 1857, following two cholera epidemics, Buffalo Bishop John Timon invited the Daughters of Charity, founded in America by St. Elizabeth Ann Seton in 1809, to establish a Rochester hospital. In that year, three religious sisters, led by Sister Hieronymo O’Brien, arrived in the city with just 50 cents among them.

The sisters quickly collected donated bedding and other supplies and opened St. Mary’s Hospital in two stables in the Bulls Head neighborhood on West Main Street. In their first year, they served 250 patients, with free care to the poor and serving people of all faiths and no faith. The sisters gradually added space and opened their doors to thousands of wounded Civil War soldiers. Government payments for the soldiers’ care funded the construction of a new hospital in 1863.

As the newly consecrated Bishop McQuaid started his 41-year tenure in Rochester, his diocese was home to 54,500 Catholics worshipping in 35 parishes and 28 mission churches.

And yet the region’s Catholic population would grow even more, and rapidly. Much of this growth came from successive waves of immigrants, many of them Catholic, who came to build a new life in the prospering areas of Rochester, the Finger Lakes area and the Southern Tier. Settling into the area, they founded a number of national ethnic parishes, many led by priests who had journeyed with them from Ireland, Germany, Italy, France and Poland and other parts of western and Eastern Europe as well as the Middle East. The speed of growth and the diversity of cultures brought new challenges and opportunities.

In the late 1940s, a new wave of immigration brought to this diocese large numbers of Hispanic immigrants, many of them from Puerto Rico. Since the new immigrants had not arrived with their own priests, the Office of the Spanish Apostolate in the mid-1960s and the Instituto Pastoral Hispano in the late 1980s were founded to provide programs and form lay leaders in the Spanish language. Regional diocesan migrant ministries also responded to the sacramental and pastoral needs of Hispanic migrant workers throughout the diocese.

Following the end of the Vietnam War in 1975, large numbers of Vietnamese migrated to the U.S. In response, the diocese developed an agreement in the mid-1970s with the Congregation of the Mother Co-Redemptrix to provide a Vietnamese priest to address the sacramental and pastoral needs of this community.

In 1986, the first Office for Black Ministries in the U.S. was established in Rochester to address the needs and perspectives of black people in the church and in society. In 2012, a Cultural Diversity Office was created to coordinate all these efforts.

As the home of Rochester School for the Deaf and the National Technical Institute for the Deaf at Rochester Institute of Technology, Rochester also has the largest per capita population of deaf and hard-of-hearing people in the country. In 1981, St. Mary Church of the Deaf was founded in the basement of St. Mary’s Church in downtown Rochester. In 1991, the church was renamed Emmanuel Church of the Deaf when it moved to Our Lady of Good Counsel Church. More recently, the deaf Catholic community has worshipped at St. Monica Church.