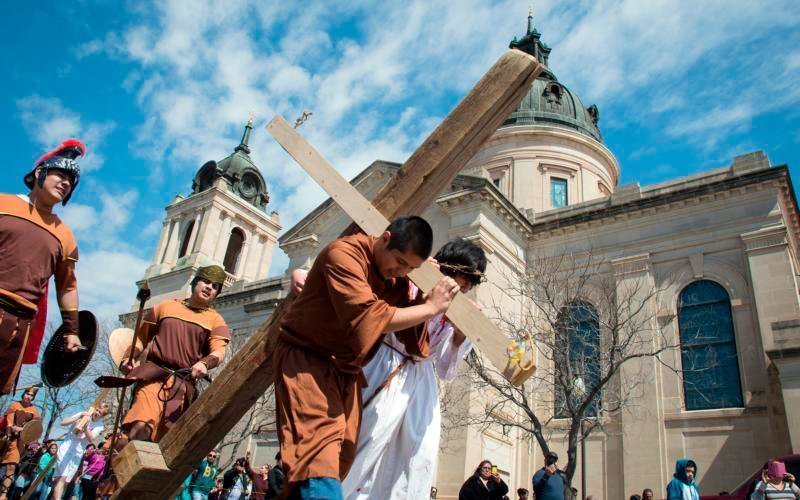 Youth depicting Simon of Cyrene and Jesus carry a cross past the Cathedral of the Immaculate Conception March 25 in Wichita, Kan. Police closed the streets around the cathedral for the youth group's Stations of the Cross. About 200 parishioners participated in the event. (CNS photo by Christopher Riggs/Catholic Advance)

VATICAN CITY (CNS) — During this year dedicated to the younger generations, Pope Francis asked that the meditations for his Good Friday service be written by young people.

Twelve young women and three young men between the ages of 16 and 28 wrote the reflections and prayers that will be read March 30 during the Stations of the Cross at Rome’s Colosseum — an event attended by the pope and thousands of pilgrims, and one seen by potentially millions of television and online viewers.

The pope is giving more than a voice to the voiceless; he’s giving them an actual world stage.

The man coordinating the unusual papal assignment was Andrea Monda, a high school religion teacher in Rome, who tries to bring the existential periphery of religion class to the fore with his docu-style reality series, “Good morning, professor!” which is broadcast on the Italian bishops’ television channel, TV2000.

Monda looked for volunteers among his current and former students, and it just unintentionally happened that more women than men wanted to take the challenge, he told Credere, an Italian weekly magazine run by the Pauline Fathers.

“Perhaps it’s because we are more apt to get involved; new things don’t scare us. Boys overthink it too much,” said Cecilia Nardini, one of the many students who spoke to the magazine.

This unique opportunity shows just how much importance the pope places on having young people’s voices be heard, said Agnese Brunetti, 17.

Usually, she told Credere, “in our everyday life, we are given the cold shoulder a bit. In a conversation with adults, we know that our point of view won’t be considered very much.”

Sofia Russo, 18, said they had never written a meditation for prayerful reflection before and “there are people much more qualified to do it.”

“But,” she said, “perhaps the pope wanted to show that the church is also made up of simple people like us” and that it isn’t always necessary to be a theologian, rather, “it’s enough to have experienced Jesus’ love.”

Monda had the group sit down together and read all four Gospel accounts of Christ’s passion. He then asked them to visualize and feel part of each scene, and whichever of the 14 stations affected them the most would be the one they were assigned.

Greta Sandri, 18, said she was struck by the 11th station — Jesus is crucified — because an infuriated crowd had condemned him. Today’s social networks often see similar tragedies play out, she said in her mediation, with people “nailing other people’s every mistake without a chance of being pardoned.”

She prayed, in her meditation, for God to help “to free me from all the fears that, like nails, paralyze me and keep me away from the life that you wished and prepared for us.”

Maria Tagliaferri, who is studying nursing, and Margherita Di Marco, a sophomore philosophy major in college, wrote the second station together — Jesus takes up his cross.

They said they were only a few years younger than Jesus, who today, they wrote, would still be considered a young man. And yet, he was able to take what life had to offer seriously and stick things out, knowing there was a “hidden and surprising” meaning behind it all, they wrote.

For them, on the other hand, “how many times have I rebelled against and gotten angry at the responsibilities I received, that I felt were burdensome or unjust? You don’t do that,” they wrote, praying they, like Jesus, could learn to embrace their crosses and discover resurrection and glory in pain and suffering.

Russo, who wrote the eighth station — Jesus meets the women of Jerusalem — said Jesus interacting with the least, the marginalized and those, like women at the time, not deemed worthy of being addressed, made him “truly revolutionary.”

Jesus knew what suffering awaited the world, and his frank and direct warning to the women “hit me,” she wrote.

Today, so much effort is put into twisting words with a “a cold hypocrisy that hides and filters what we really want to say. Warnings are increasingly avoided and one prefers to leave others to their fate, not taking care to urge their well-being,” Russo wrote.

Jesus, she added, speaks like a father whose intention is “correction, not judgment.”

For the 10th station — Jesus is stripped of his garments — Greta Giglio saw in Jesus, “a young migrant, his body destroyed, arriving in a too often cruel place,” exploited by people ready to strip away everything he has for their own benefit.

Francesco Porceddu, 17, who wrote the seventh station, said that when Jesus falls for the second time, he gets back up with love, not haughty pride.

Jesus knows “that at the end of the struggle there is paradise; you get back up to guide us there, to open the doors to your kingdom,” he wrote. His prayer was for all young people to hear Jesus’ message of humility and be guided by Jesus and his love.

“Teach us to help those who suffer and fall near us, to dry their sweat and put out our hand to pick them back up,” he wrote.

Editors: As soon as the Vatican translates the meditations, they will be available in English and Spanish at: http://www.vatican.va/news_services/liturgy/2018/documents/ns_lit_doc_20180330_via-crucis-meditazioni_it.html