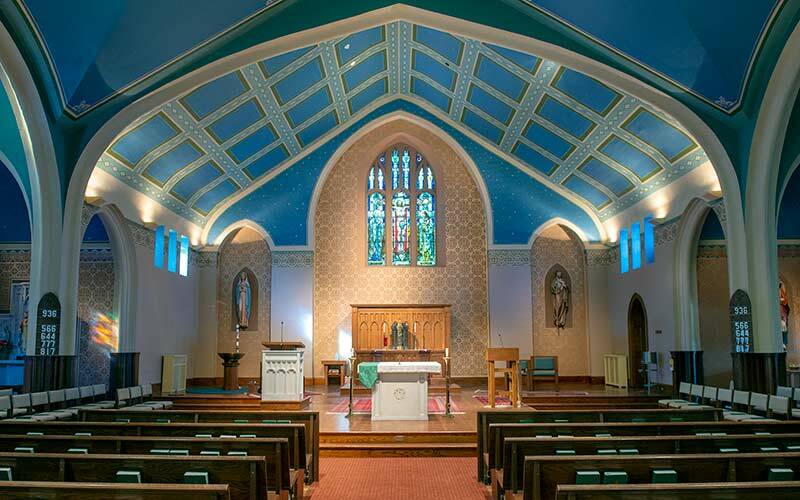 It was a homecoming that was more than four months in the making.

Christmas Eve 2021 marked the first time many parishioners had set foot inside St. Michael Church in Newark since the church closed for renovations the previous August. It’s safe to say people liked what they saw, according to longtime parishioner Carmella Owen, chair of St. Michael’s finance council.

“I was present for the 4 p.m. Mass on Christmas Eve and … was greeting people as they came in,” Owen said. “They were just awestruck as they went in. There were gasps. It was so beautiful. They were so happy to be home.”

The church had been in need of a renovation for many years, as no significant work had been done to St. Michael Church since the 1980s, said Owen, who served as the parish’s project manager for the recent renovation. The church’s roof had started to leak, some plaster needed repair, the carpet needed to be replaced and the lift that transferred people from the church’s basement to the main level needed repairs but was so old that parts were no longer available for it, she said. There also was considerable interest in moving the tabernacle from the side altar where it had been situated since the 1980s back to its original home behind the main altar, Owen said.

Projects had been discussed over the years under several different parish leaders but recently became feasible due to generous bequests from several parishioners, she said.

“That allowed us to pursue this without having to do any major fundraising or anything like that. We were very blessed,” Owen said. “We knew the church was on its way to having serious problems. We started with fixing the roof, because there was no point in fixing the inside if it was still going to leak.”

The parish hired Swiatek Studios, a historic-building and architectural-arts restoration company based in Clarence, N.Y., to develop and carry out a plan for the restoration, and work began on the church’s interior Aug. 9. From Aug. 15 through Dec. 19, the parish’s weekend Masses took place at nearby St. Michael Church in Lyons. Both the Newark and Lyons churches are part of a cluster of Wayne County parishes led by Father Felicjan Sierotowicz.

“Every other Sunday, I would speak at both of our Masses and tell people where we were and what we were doing. I had a poster board with pictures of the process. People were really so grateful to be part of the process in that way so they knew how it was progressing,” Owen said. “At the last one, I was able to announce to them that we will be back in the church on Christmas Eve, and the church erupted in applause. They were so excited to be back home.”

Before getting to that point, a team of parish staff and volunteers made many decisions, from choosing the church’s new carpet to choosing the paint colors for its walls. The color scheme eventually chosen for the walls involved several different colors as well as stenciled designs. This makes the church’s interior look drastically different from its primarily beige interior prior to this renovation, but parish council member Peggy Hartman said she has not heard a single complaint. The new colors on the wall help draw out the other beautiful aspects of the church, added parishioner Bob Humphrey.

“All the colors force everything that was already there to stand out, particularly the stained-glass windows. They absolutely pop now,” he said.

“It enlivens them. They look like they’re going to step out of the glass and come talk to you,” Owen remarked.

The artist who painted the walls also refurbished St. Michael’s Stations of the Cross as well as a trio of wooden statues of St. Michael, St. Joseph and Mary.

“They are so lifelike now that when you look at the Virgin Mary, her eyes pierce you. She’s really looking back at you,” Owen said.

The tabernacle was restored to its original place behind the main altar, although the antique piece of marble upon which it had sat remained on a side altar.

“Everyone was afraid if they touched it, it would break and we’d never be able to replace it,” Owen explained.

On a recent trip to his native Poland, Father Sierotowicz found a statue of Christ the King that perfectly fit in the space formerly occupied by the tabernacle, and he carefully transported it back to Newark in a specially made box.

A team of volunteers spent hours in the church Dec. 22 and 23 as they cleaned and brought hymnals, books and extra chairs from the basement in preparation for the church’s reopening. Parishioners were blown away when they entered the church on Christmas Eve, Humphrey said.

“It is just very humbling to walk in there and be affected by it as much as it does upon initial viewing,” he said. “It almost feels like it embraces you.”