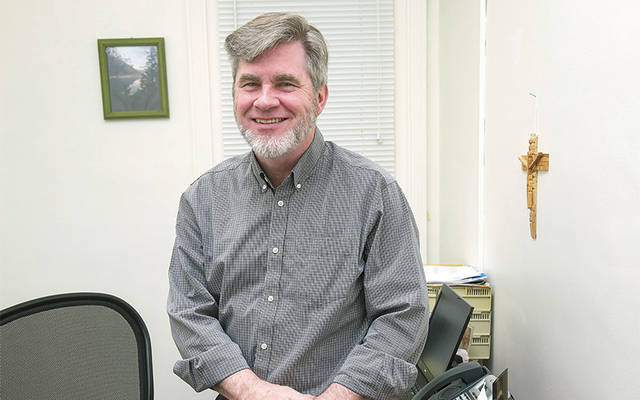 Deacon Greg Kiley is coordinator of volunteer engagement for Here For You, a new initiative to help isolated residents in Wayne County. (File photo)

Fortunately, however, Wayne County also is home to a wealth of community resources, and a new initiative aims to help isolated residents access those resources. Organizers of this initiative, called Here For You, plan to accomplish this goal, Deacon Kiley said, by tapping into one of the county’s greatest resources: its large number of generous volunteers.

“The goal is by the end of the year to have 50 trained, vetted and engaged volunteers, (each) giving approximately two hours a week. If you do the math, you’re talking about 5,000 hours a year on a countywide basis,” explained Deacon Kiley, coordinator of volunteer engagement for Here For You.

A pilot program, Here For You is funded by a grant the Diocese of Rochester’s Department of Pastoral Services received from an organization that wishes to remain anonymous, according to Bernard Grizard, director of the department. Organizers initially had planned to launch the program in both Wayne County and the City of Rochester, with a part-time coordinator of volunteer engagement for each region, but have postponed the launch of the Rochester component.

The program is well underway in Wayne County, however, where a resident’s sense of isolation frequently is caused or at least compounded by the county’s rural nature and the large distances between communities, Grizard said. Wayne County also has a higher-than-usual percentage of residents who are elderly, noted Deacon Kiley, who took on his role as coordinator of volunteer engagement on Jan. 6.

“Nationwide there’s a ratio of 3.5 working-age people for every retirement-age person, but in Wayne County that rate is 2.2 working-age people to one retirement-age person, and in the eastern part of Wayne County it’s 1.5 to one. In that aging group are folks who are taking care of themselves just fine, but it does show that there’s sort of a looming problem there,” said Deacon Kiley, who also serves as parish deacon at St. Joseph the Worker in Lyons, Clyde and Savannah.

Even those elderly residents who currently are independent could be facing isolation in future years, especially if they lose the ability to drive themselves, Deacon Kiley said. Transportation is a key issue in Wayne County, where it’s not uncommon for communities to lack such staples as grocery stores, forcing residents to travel to neighboring communities in order to purchase supplies. Residents who are unable to drive must rely on family members to help them meet their basic needs, and residents without family nearby are left in precarious positions, Deacon Kiley said.

Wayne County also has the lowest median income of any of the surrounding counties, according to a recent needs assessment released by the Wayne County Department of Aging and Youth.

Deacon Kiley is in the process of compiling a list of the many resources, organizations and programs available to help Wayne County residents with their various needs. Volunteers will be asked to familiarize themselves with these resources as part of their training. A volunteer who visits a senior citizen and realizes the individual’s home is freezing cold, for example, will know that the Wayne County Action Commission could help the resident winterize the home and connect the resident with the commission, Deacon Kiley said. He also is looking for gaps in these resources that need to be filled.

“We will train volunteers who can go to reach out to the people who are isolated, support them, meet them, connect with them and provide them with the resources they can draw from based on whatever their needs may be,” Grizard said.

Deacon Kiley is working with Carmen Rollinson, project manager in the diocesan Department of Pastoral Services, to develop volunteer training, which will include completion of the diocesan Creating a Safe Environment training as well as criminal background checks. He also is recruiting volunteers and starting to identify people who could benefit from this program. Neither the volunteers nor the residents need to be Catholic, although Deacon Kiley expects many of the volunteers will come from the local faith communities.

By developing and administering this program, the local Catholic Church is fulfilling its mission, Grizard added.

“We try to meet people’s needs with a deep belief that whatever we do to those who are in need, you are doing unto (Christ). By serving those who have the least, we are encountering Christ,” he said.