We Bought a Zoo - Catholic Courier 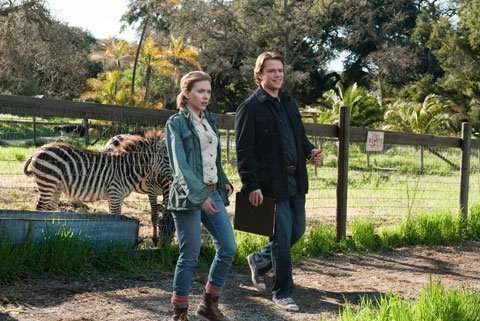 NEW YORK (CNS) — Of the various endangered species populating “We Bought a Zoo” (Fox), a man hoping for sufficient time to grieve his wife’s death is arguably the most threatened.
¬†
Based on the real-life experiences of British writer Benjamin Mee, this amiable and ambling holiday feature puts a Capraesque twist on the notion of caretaking in the wake of loss, and has some star wattage to boost its commercial prospects. If only it didn’t endorse society’s expectation that “getting over” the death of a loved one must happen within a prescribed time period.
¬†
Matt Damon stars as Mee, a Los Angeles newspaper columnist struggling with his parental responsibilities six months after his wife’s passing. Harried and dissatisfied with his job writing about other people’s adventures, he misses his wife terribly, and finds rote expressions of sympathy (see the lasagnas piling up in the fridge) unhelpful.
¬†
His precocious 7-year-old, Rosie (Maggie Elizabeth Jones), and 14-year-old son, Dylan (Colin Ford), aren’t faring too well either. Rosie has trouble picturing her mother’s face, and Dylan gets expelled from school, mostly for creating morbid art that expresses his anger and deep sadness.
¬†
Benjamin’s brother Duncan (Thomas Haden Church) urges more human interaction, i.e., dating, but Benjamin takes a different tack. He quits his job after deciding a change of scene — and the opportunity to live their own adventure — is what the family needs. They move from the city to an 18-acre rural property that contains a ramshackle zoo. Can they fix it up, pass inspection and open for business in time for the peak season?
¬†
Trying to resuscitate Rosemoor Animal Park may well bring financial ruin and further alienate father and son. Fortunately, however, along with exotic animals the zoo comes with a staff of five humans, two of whom are potential love interests for the Mee males — head keeper Kelly (Scarlett Johansson) and vivacious teen Lily (Elle Fanning).
¬†
As is only to be expected from former music journalist-turned-helmer Cameron Crowe (“Almost Famous” and “Jerry Maguire”), the soundtrack utilizes plenty of rock- ‘n’-roll ballads. Crowe’s direction is easygoing, and the script he co-wrote with Aline Brosh McKenna doesn’t belabor the peril or the romantic possibilities. Attempts at zany humor never really hit their mark, though Haden Church gives it his best. Not overly glossy by Hollywood standards, it’s a tame picture with minimal conflict. There’s little doubt all will turn out well.
¬†
It’s striking that Benjamin never mentions heaven or an afterlife when consoling Rosie and Dylan. He doesn’t rule it out, yet any spirituality being proffered is not of a theological genus. During the sufficiently affecting climactic scene, the catharsis achieved by the Mees doesn’t involve the transcendent, and is therefore not all that could be hoped for.
¬†
Equally noticeable is the implied timetable for mourning. As usual in films, grieving is made to seem like a much simpler and less arduous process than it tends to be in real life. The Mees are expected to bounce back from tragedy as soon as the six-month mark has passed; in fact, the year that it does take hardly seems sufficient. In addition to being insensitive, unrealistic and psychologically implausible, this rush, dictated by society at large, limits the movie’s emotional resonance.
¬†
Potentially even more chafing to Catholic viewers is a parallel storyline about a Bengal tiger. Benjamin’s instinct is to nurse the regal animal, which is dying of natural causes. But the argument is vehemently made that the humane and moral course of action is to end the creature’s suffering by hastening its death. This unquestioned assumption, and the way it mirrors the widower’s coming to grips with his primary loss, reminds us we’re part of a culture whose prevailing attitudes toward life and death must be carefully parsed.
¬†
These three points notwithstanding, “We Bought a Zoo” is commendable entertainment — not least because it emphasizes the importance of hard work in achieving anything of value, whether therapeutic or zoological.
¬†
The film contains at least one instance of profanity, several uses of crude and crass language, some lightly suggestive banter and a few morbid images. The Catholic News Service classification is A-III — adults. The Motion Picture Association of America rating is PG — parental guidance suggested. Some material may not be suitable for children.
¬†
– – –
¬†
McCarthy is a guest reviewer for Catholic News Service.