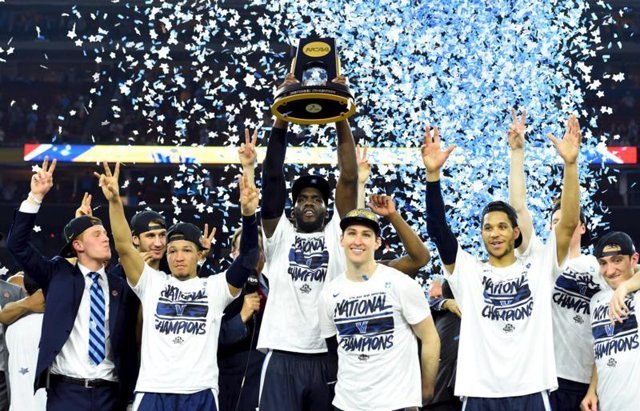 Villanova Wildcats forward Daniel Ochefu hoists the national championship trophy with teammates April 4 after defeating the North Carolina Tar Heels 77-74 in the 2016 NCAA Men's Final Four in Houston. Jenkins is a 2013 graduate of Gonzaga College High School in Washington. Villanova was founded by the order of St. Augustine in 1842.
By John Knebels
Catholic News Service
PHILADELPHIA (CNS) — Brush fires were purposely set along pockets of Philadelphia April 4 after Villanova won the NCAA men’s basketball championship.
They flamed and flickered high enough to be easily seen by helicopter, but they remained safe and contained until the police demanded they be extinguished.
It is safe to say, however, that the fire that burns within Villanova’s basketball team and its collective fans across the country and in Philadelphia will be raging for some time to come.
In a basketball game that forged itself into history, the Wildcats edged North Carolina, 77-74, in the men’s Division I NCAA championship in front of an announced crowd of 74,340 at Houston’s NRG Stadium.
The championship-winning points occurred when junior Kris Jenkins made a three-point shot as the clock displayed all zeroes, opening the floodgates for awestruck players, crazed fans and an endless supply of streamers and confetti to meet in a pile of jubilant humanity just inches from where Jenkins made his shot.
"To say I’ll never forget this is an understatement," said Jenkins. "This isn’t about me. It’s about everyone on this team, about everybody back home, about every player who has ever worn a Villanova uniform. This is something that we all share."
Trailing by five points at halftime, Villanova seized control in the second half and led by 10 points with less than five minutes remaining. But North Carolina, a five-time NCAA champion, battled back to within three points before Carolina’s Marcus Paige rattled home an off-balance, three-point prayer that tied the game at 74-74 with 4.7 seconds left, inducing temporary panic in Nova Nation but ultimately setting the stage for Jenkins’ stop-and-shoot buzzer-beater.
Watching the replay, Jenkins seemed to know instinctively that his attempt would work. "To be honest," said Jenkins, who tallied 14 points in 21 foul-challenged minutes, "I think every one of my shots is going in."
As the ball fell through the hoop, Jenkins raised his arms in triumph as the Villanova bench raced to greet the game’s most-celebrated hero. Before that, players like senior four-year captain Ryan Arcidiacono, junior Josh Hart, senior Daniel Ochefu, and sophomore Phil Booth had helped provide the foundation for a victory ticketed for the ages.
"Our teammates, we just fought," said Arcidiacono. "At halftime, we said we needed to play 20 minutes of Villanova basketball. In the second half, we just fought. We made remarkable plays at the end of the game. I love this team."
Villanova coach Jay Wright appeared completely reserved throughout the celebration process. He said he was looking forward to seeing the replay of the winning basket. He didn’t have an explanation for his lack of tangible emotion, but he assured everyone that, inside, he was ecstatic as anyone.
"You’re like a parent when you’re a coach," said Wright. "I just couldn’t be prouder, couldn’t be happier to see them enjoy this and fulfill their dreams.
That’s what it’s all about for a coach, just to see their eyes, to see their satisfaction, their enjoyment. There’s no better feeling in the world for a coach or a parent."
Consistent with Catholic Augustinian values — the order founded and has run Villanova since 1842 — Wright lauded the opposing Tar Heels, particularly coach Roy Williams.
"That was one of the great college basketball games we’ve ever been a part of," said Wright. "We didn’t just beat a great team. We beat a great program, a classy program. Before they determined that the shot was good, Roy came right up to me and said, ‘I’m really disappointed for our guys. It was a great game, but I’m really happy for you.’ I know he meant that."
– – –
Knebels covers sports for CatholicPhilly.com, the news website of the Archdiocese of Philadelphia.
Copyright © 2022 Catholic News Service, Inc. All rights reserved. Linking is encouraged, but republishing or redistributing, including by framing or similar means, without the publisher's prior written permission is prohibited.