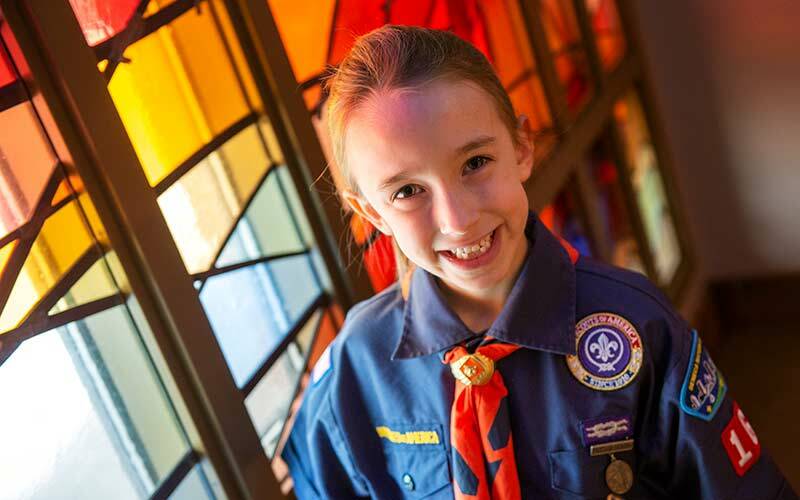 WEBSTER — Maggie Chamberlain has been a Cub Scout for less than two years, but she’s packed quite a bit into her 16 months with the Webster-based Pack 163.

Maggie, who turns 7 on March 3, has camped in a cabin during the summer months and a tent during the winter months. She’s tried her hand at archery, which she loves and claims is “my destiny.” And on Feb. 6, she earned the Light of Christ religious emblem for Catholic Cub Scouts.

“I was the only one that got the Light of Christ,” remarked Maggie, who is in first grade at St. Rita School.

Girl Scouts also may earn religious emblems. The recognition program administered by the National Catholic Committee for Girl Scouts and Camp Fire includes five different emblems for Girl Scouts in kindergarten through 10th grade. Information about both sets of emblems may be found at oec.dor.org/youth-ministry/catholic-scouting/.

Maggie’s family first learned about the religious emblems open to Catholic Scouts several years ago when her older brother, Nathan, was a Scout. Nathan, now a sophomore in high school, currently is working to earn his Eagle award, according to his mother, Margo Chamberlain. In fact, Chamberlain believes Nathan’s example likely had much to do with Maggie’s decision to become a Cub Scout.

“She’s been attending Scouting events since she was a baby,” Chamberlain explained.

Nonetheless, Maggie didn’t officially decide to become a Scout herself until the fall of 2020, when she and her father attended a bike rodeo event sponsored by Pack 163, which meets at St. Rita. After joining Scouts, Maggie, then in kindergarten, spent a year as a Lion Cub Scout before moving up to the next rank this past fall.

“Now I’m a Tiger!” Maggie explained to the Catholic Courier.

Maggie said she has enjoyed Cub Scouts so far and is looking forward to building her car for the annual Pinewood Derby.

“I want to make a unicorn car,” she said.

Camping trips also rank high on Maggie’s list of favorite Scouting experiences. It was during one of these camping trips that she was introduced to the sport of archery, which she enjoyed so much that she asked for — and received — her own bow and set of arrows for Christmas. Maggie is passionate about her newfound hobby.

“It just speaks to me,” she said of archery.

Scouts learn a lot of life skills through Scout activities, and also learn to give back to their communities through service, Chamberlain added.

“It just teaches them to be good citizens,” she said. “They talk about duty to God. The Scout Law says a Scout is trustworthy, loyal, helpful, friendly, courteous, kind, obedient, cheerful, thrifty.”

“And reverent,” Chamberlain agreed. “All the things that a parent wants their child to be.”

The religious emblems provide a nice way to infuse a little bit more of the Catholic faith into the Scouting experience, Chamberlain said.

Maggie worked on the Light of Christ emblem over the course of several weeks, using a workbook to focus the discussions she and her parents had about Jesus and his family, Bible stories and the sacraments.

“The point of the program is to get the Scout to recognize that Jesus is their friend,” Chamberlain said.

Working on the emblem with her daughter was a valuable experience, she added. Although Maggie goes to a Catholic school and her family attends Mass each week and prays together at home, Chamberlain hadn’t been quite sure how much Maggie was really absorbing. Their discussions while working on the emblem set Chamberlain’s mind at ease.

“It was eye-opening for me to understand how much she gets all of our efforts. She understands that Jesus is her friend and he’s there for her,” Chamberlain said. “She worked really hard on (earning the emblem). I’m proud of her.”