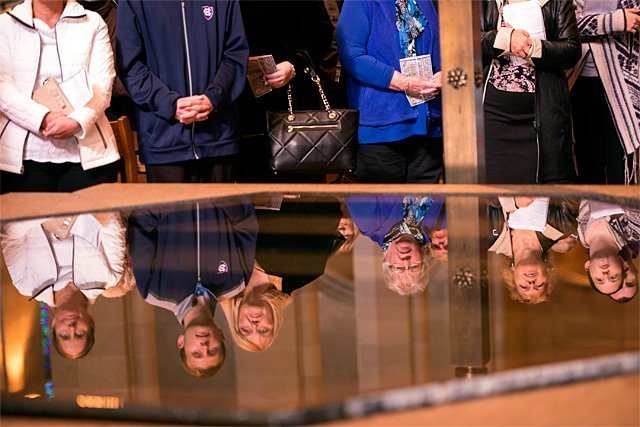 Parishioners from Webster’s Holy Trinity Parish take a tour of Sacred Heart Cathedral Oct. 23 during their pilgrimage to the cathedral’s Holy Door of Mercy.

ROCHESTER — When Pope Francis opened the Year of Mercy in December 2015, he encouraged Catholics throughout the world to make pilgrimages to either the Holy Door of Mercy at St. Peter’s Basilica in Rome or the designated Holy Doors in their own dioceses. And on Oct. 23, a group of Catholics from Webster did just that.

That afternoon, nearly 50 members of Holy Trinity Parish convened at Sacred Heart Cathedral in Rochester, where they walked through the cathedral’s central inner entrance, which Bishop Salvatore R. Matano previously had designated as the Diocese of Rochester’s Holy Door of Mercy. He opened that door in December 2015, after Pope Francis declared that Catholics who pass through one of the designated Holy Doors of Mercy would receive plenary indulgences — or the remission of temporal punishment deserved for their sins — if they also prayed for the pope and his intentions, prayed the Profession of Faith (the Creed), and received the sacraments of reconciliation and the Eucharist.

Holy Trinity parishioner Sue Mortillaro said her children recently traveled to Europe and passed through the Holy Door of Mercy at St. Peter’s Basilica, and their experience inspired her to want to do the same, albeit on a more local level. The pilgrimage to the cathedral provided parishioners with an opportunity to fully participate in — and thank God for — the Year of Mercy, noted Father Timothy Horan, pastor at Holy Trinity.

"It’s been a time for us to learn about the love God has for us and that we are to give to our neighbors," he said. 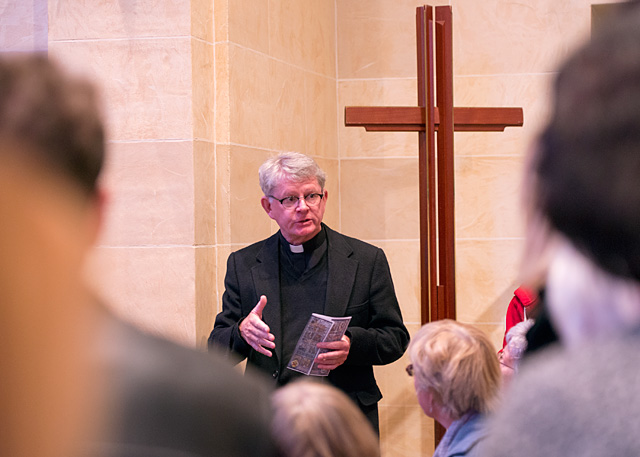 Father Timothy Horan, pastor of Holy Trinity in Webster, speaks to parishioners during a tour of Sacred Heart Cathedral Oct. 23.

Before walking through the Holy Door of Mercy, the Webster pilgrims gathered on the steps of the cathedral as Rose Davis, pastoral associate for the Cathedral Community, told them a little bit about the history of the cathedral and its grounds. Sacred Heart Cathedral was built in 1927 but didn’t become the official cathedral or mother church of the diocese until 1957, Davis explained. A number of the pilgrims had not been inside the cathedral since an extensive renovation was completed in 2005.

"Lord God, you open the doors of your mercy to all who come to you. Look upon us, your children, sinners, and receive us into your arms. As we enter into your house, may you enter into our hearts," Father Horan prayed before he led the pilgrims inside the cathedral and through the Holy Door of Mercy.

Once inside, the pilgrims gathered around the baptismal font and gazed back toward the Holy Door and the choir loft above it. Davis pointed out some items of interest inside the cathedral, including some of the more than 130 angels that adorn the inside of the building and explained why there are no small fonts for holy water near any of the cathedral’s entrances.

"It is very symbolic to have one large, permanent (baptismal) font to represent our one baptism," Davis said. "It was placed here at the main entrance to symbolize that it’s through baptism that we enter the life of Christ and the life of the church."

Father Horan led the parishioners in another brief prayer service, then Davis gave the group a guided tour of the cathedral, including its eucharistic chapel and reconciliation rooms. After the tour was over, Father Horan again addressed his parishioners.

"It would be well for us to take just a moment to reflect on what this year has been about," he said of the Year of Mercy.

Father Horan asked each parishioner to quietly reflect on a moment of mercy he or she had received, then explained that mercy is a form of love.

"Love comes in many different forms," he said. "Justice is a form of love. … It’s to do what is right and good. Mercy goes a step further. It’s giving love when the recipient does not deserve it. You who are mothers, grandmothers, fathers, grandfathers, you know what this mercy is about. You know countless times your child has come to you having disobeyed you, failed you, deceived you, failed to meet your expectations. Countless times your heart has been called to bestow not justice, but to give your child mercy."

A desire to be a part of the Year of Mercy motivated Holy Trinity parishioners Linda and Will Trout to participate in the pilgrimage to the cathedral. Passing through the Holy Door of Mercy and spending some quiet moments in the cathedral turned out to be a beautiful, prayerful experience, Linda Trout said.

"I think it deepened my Catholic faith to be here today," Will Trout added.