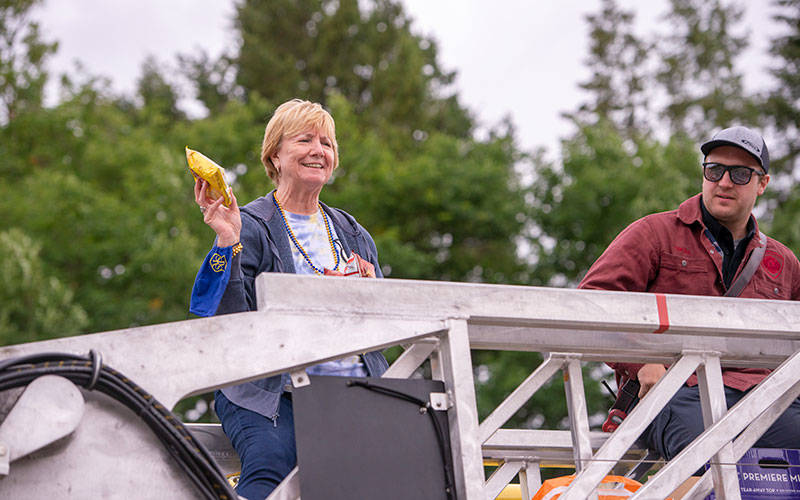 Blessed is the word Mary Ellen Wagner uses to sum up her more than four decades as an educator in the Diocese of Rochester Catholic Schools. On July 31, Wagner retired from Webster’s St. Rita School, where she has been serving as principal for the last eight years.

“I truly feel blessed to be able to be in this ministry for so many years,” Wagner said.

Catholic education always has been a part of Wagner’s life. A graduate of the former Our Lady of Good Counsel School and St. Agnes High School in Rochester, her first teaching job out of college was at a Catholic school in Holley, Orleans County, in the Diocese of Buffalo. Wagner said she found her two years there to be very rewarding.

“I always wanted to go into teaching and then to be able to share my faith was an added plus,” Wagner told the Catholic Courier June 17.

From there she began her 42-year career in the diocesan Catholic schools as a teacher at the former Holy Family School in Rochester, becoming principal in 2003. When the school closed in 2008, Wagner became principal of the former Nazareth Middle School and Nazareth Academy, until those schools merged with Aquinas Institute in 2010. She then served as assistant superintendent for curriculum and instruction in the diocesan Catholic Schools Office before replacing Sister of Mercy Katherine Ann Rappl, who had served as St. Rita’s principal for 30 years.

In 2020, Wagner was a recipient of the Catholic School Administrators Association of New York State’s Lighting the Fire for Catholic Education Award, which honors Catholic-school leaders who help promote Catholic education in their own dioceses.

Looking back on her career, Wagner said she enjoyed each day spent with the students, as well as seeing so many children being given the opportunity to attend Catholic schools.

“The happiness that it has brought me to bring that faith component to others has been most memorable to me,” she recalled.

In addition, Wagner said the staff and the teachers at the schools at which she has worked also brought joy to her throughout her career.

“The teachers and the staff have made it such a rewarding work environment,” she added.

Wagner acknowledged the 2020-21 school year was one of her most challenging years due to meeting the requirements and demands necessary to open St. Rita School for both in-person instruction and distance learning five full days a week. However, Wagner said the past school year also presented her with one of her most successful school years.

“St. Rita School was able to maintain a safe and healthy environment throughout the entire year, and (we) did not have to close one day due to COVID-19,” she said.

In her retirement, Wagner plans to take some road trips to visit different places. More importantly, though, she said she will be spending time with her two grandchildren — her 22-month-old granddaughter and 8-month-old grandson, who both live in the area.

“The thing I’m looking forward to the most (in my retirement) is just being able to spend quality time with them,” Wagner said of her future plans.

As she begin this new chapter in her life, Wagner said she will take with her the many beautiful memories of the students and families that she has served as well as the people she has worked with through the years.

“The innocence and simplicity of the children brought me joy each and every day,” she said. “To see the way they embrace life in such an enthusiastic and exciting manner is truly remarkable. The faculty and staff’s dedication and commitment to the students and the mission of Catholic schools have also always inspired me. All have touched my life in a special way for which I will be forever grateful.”