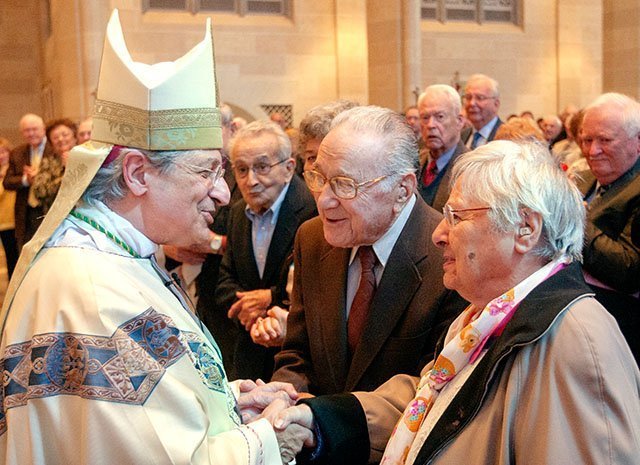 Bishop Salvatore R. Matano greets Mario and Angeline DeMasi at the end of the Wedding Jubilee Mass April 27 at Sacred Heart Cathedral. The DeMasis, who will celebrate their 72nd anniversary in July, were the longest-married couple at the Mass.

During the annual diocesan Mass celebrating married couples April 27, tension grew as couples stood to be recognized for how many years they had been married.

Who would be the longest married?

At that, Mario DeMasi rose to his feet. He reached down and gently caressed the back of Angeline DeMasi’s head.

Then he and his daughter hooked their hands under her arms and carefully lifted her to her feet. Upon seeing her stand, the crowd at Sacred Heart Cathedral rose in a standing ovation as Bishop Salvatore R. Matano greeted the couple.

"Whatever you are doing, keep doing it," Bishop Matano said with a smile.

After the Mass, Mario DeMasi said the couple has no set formula for marital longevity.

"They didn’t, though," protested his daughter, Claire Mulroney. "I don’t remember the labor."

Mulroney said her parents were open and welcoming in their home and around their dinner table. They also were very supportive of what their children wanted to do, she said, noting she benefitted from the good example they set.

"They were charitable," Mulroney said. "They supported foster children all around the world and from the U.S."

Mario DeMasi said he and his wife were grammar-school sweethearts. He said he had been on active duty in the military and had gotten leave, giving the couple only a week’s worth of notice prior to their wedding on July 18, 1942, at Holy Redeemer Church. Their reception was at Green Lantern Inn in Fairport.

"I was in the GI winter uniform because it was dressy," Mario DeMasi recalled.

Following the wedding jubilee Mass, Mario DeMasi lamented the absence of longtime friends Salvatore and Dora DiSchino, who the year before had been the longest-married couple. Salvatore DiSchino died just a few days before this year’s wedding Mass.

A few minutes later, attendee Jane Shengulet approached the DeMasis to tell them how in awe she was of their marital longevity and of the loving caress Mario DeMasi had for his wife.

It was the first time the Shengulets, who are celebrating 25 years of marriage this year, had attended the Mass, which featured a vow renewal in addition to recognition of how many years couples had been married. The Shengulets heard about the Mass through the St. John of Rochester Church bulletin.

"It was beautiful to see how many other couples were married for so many years," Jane Shengulet said. "It makes it special."

The Shengulets met during college and were friends for nine years, during which time they often double dated, before deciding they would make a good couple. At their wedding the priest made a joke about their long friendship, Robert Shengulet said.

"He said it took us a while to light our unity candle, and it took a while to get together," he said.

One couple at the Mass said the other couples were inspiration for them to strive for the 25-year mark and beyond. Amanuel and Cathy Malik celebrated their 13th wedding anniversary by attending the Mass, where their four sons served on the altar.

Parishioners of the Cathedral Community, the Maliks met at St. Bernard’s Institute during a sacramental theology class taught by Father Robert Kennedy.

"We were married on Divine Mercy Sunday," said Cathy Malik, noting that they had gotten joy from getting married during the Easter season.

"Seventy-two years," mused Amanuel Malik. "Do you think we are going to make it? We’ll be 105 then."