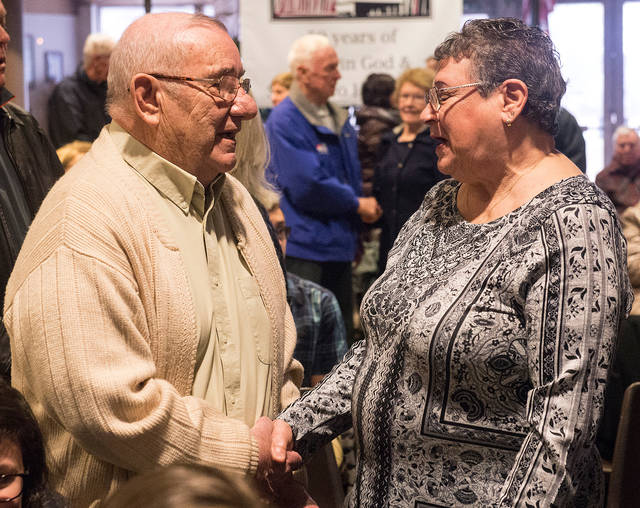 NORTH CHILI — The warmth that Lisa Guernsey feels exuding from St. Christopher Parish goes back an entire half-century, and that’s what has kept her there for the duration.

“This has always been a welcoming parish,” she stated.

Lisa and Gary, who were married on July 25, 1970, were the 13th couple to be married in the parish, which has now seen nearly 600 marriages. They, along with many other married couples, were on hand April 14 for a special ceremony during the 4:30 p.m. Saturday Mass.

Following a homily on marriage by Father Robert Gaudio, the couples — some married for only a few years, others for more than six decades — stood up, looked each other in the eyes and renewed their wedding vows. A festive reception, open to all who attended the Mass and highlighted by a wedding cake with the number 50 on top, followed in the parish center.

The liturgy was one of many jubilee events scheduled throughout 2018 to celebrate the golden anniversary of St. Christopher, located at 3350 Union St. A particularly notable event will occur on Sept. 23, when Bishop Salvatore R. Matano is set to preside at the 10 a.m. Sunday Mass with a picnic to follow. During that celebration, a time capsule that was created at the time of the parish’s founding will be opened.

Also on tap for the parish’s anniversary year are:

‚Ä¢ An evening of entertainment on May 4 at 7 p.m., with songs from the past 50 years being performed.

‚Ä¢ A birthday cake event in June, with a special emphasis on inviting former parishioners back to St. Christopher.

‚Ä¢ A Broadway night in August.

‚Ä¢ An Oktoberfest in October.

‚Ä¢ A Mass of Remembrance in November for deceased parishioners.

‚Ä¢ The formulation in December of a new time capsule, to be opened 50 years from now.

‚Ä¢ Reflections on St. Christopher by founding members being printed in weekly bulletins.

St. Christopher is a relatively new parish in the Rochester Diocese, having been founded in 1968. The late Father Elmer McDonald, inaugural pastor, invited parishioners to take part in suggesting names for the parish and their final choice, St. Christopher, was approved by Bishop Fulton J. Sheen. The parish was actually begun before its current campus was completed, with temporary facilities — including Masses in a nearby medical-center building — being utilized. St. Christopher’s church opened in 1971, and the parish center annex was completed in 1976.

Lisa Guernsey — whose parents, Millie and Tony Uttaro, were founding members — noted that both her children and all three grandchildren received their sacraments at St. Christopher and currently belong there as well. In addition, her husband went through the parish’s Rite of Christian Initiation of Adults process in the late 1970s.

“Our whole life has happened in this church,” she remarked.

Another current parishioner with founding parents is Jeanne Colleluori, who organized the wedding-themed event on April 14. After attending St. Christopher as a child with her mother and father, Genevieve and Bill McFee, she returned to the parish 12 years ago with her husband, Rich — and couldn’t be happier.

“People know you and welcome you. We have such great friendships,” Colleluori said, noting that this air of inclusion for all is vital to the parish’s success: “We don’t want people to say I go to St. Christopher. We want them to say I belong to St. Christopher.”

The positive spirit of this parish of just over 1,000 registered families is appreciated by its pastor as well.

“It’s a gift,” said Father Gaudio, whose tenure at St. Christopher dates back to 2004. “This parish has been a blessing for me in so many ways.”