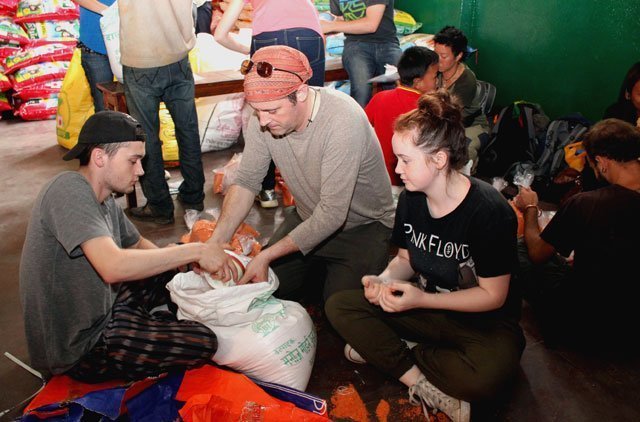 Tourists Tave Teloye and his children Alan and Juliet prepare lentil packets for earthquake victims May 1 at Assumption Catholic Church in Lalitpur, Nepal.
By Anto Akkara
Catholic News Service
KATHMANDU, Nepal (CNS) — Truckloads of relief material organized by church charities began moving across Nepal a week after the Himalayan nation was rocked by a magnitude-7.8 earthquake April 25.
"I am glad that much-needed aid is finally beginning to reach remote areas," Greg Auberry, Catholic Relief Services’ regional director for East and South Asia, told Catholic News Service May 4.
Auberry had just returned to Kathmandu from Gorkha — just 85 miles from the capital but five hours of rough mountain drive — where CRS and Caritas Nepal staff had distributed relief material like tarps, dry rations, hygiene items and water purification tablets.
"Given the mountainous terrain, getting relief supplies to even the most convenient locations for people to collect them is not easy. It took CRS several hours with small tractors — one getting stuck — to get the tarpaulins and household supplies to the village of Bukrang near Gorkha," said Auberry, who oversaw relief distribution in the region May 3.
"People walked miles to come," he added.
Nine days after the quake, the Nepal government revised the death toll to more than 7,200 killed and 14,300 injured, while thousands have gone missing.
Father Pius Perumana, Caritas Nepal director, told CNS that besides CRS contingent, officials of a dozen national Caritas affiliates like CAFOD, Cordaid and Caritas of nearly a dozen countries had reached Nepal to augment the church relief work.
"While relief material is being material sent to different remote areas, our assessment teams also have gone to the worst-hit areas. We are meeting on a daily basis to coordinate the relief work," Father Perumana said.
"Relief materials are being already procured from wherever we can," said Albert Grasse Hokamp, coordinator of Caritas Germany for East Asia.
Hokamp, who has spent several years in Nepal with international charities, said food and other relief supplies have been ordered from India, tents from Pakistan and Dubai, and medicines from Europe.
"We are working as a team and need to coordinate and plan our relief work," he added.
While top church workers plan out the strategies, church centers and parishes in Kathmandu are a beehive of volunteers and buzzing with activity. Even Hindu volunteers have joined Catholic youth and others to prepare parcels of tea, sugar and lentils for distribution in the villages.
"My friend in Caritas (Nepal) invited me. I am happy to be here instead of idling the time at home with our college shut because of the earthquake," Usha Thapa, a Hindu undergraduate student, told CNS May 1 while filling lentil packets for distribution at Assumption Catholic Church in Lalitpur.
Neeru Shreshta, another young Hindu woman, said she came to the church prompted by Thapa and enjoys the work.
"I have been coming here for two days and left last night at 9 p.m.," Thapa said proudly.
Three dozen Western tourists also were preparing relief packets at a frantic pace as if they were working in a factory.
"We came here as tourists. But we can’t do much in the present situation. When we were invited to come here, we joined gladly," said Tave Teloye of the Canadian province on Ontario. He and his children, Alan and Juliet, formed a packing unit at the Assumption Church hall.
Doren Graham, a university student from New Zealand, was in his hotel room in Kathmandu when the quake hit, a day after he arrived in Kathmandu.
"I came for trekking. Though it is not possible now, I will extend my stay to be a relief after witnessing the devastation and the suffering," Graham said.
Meanwhile, Catholic communities in Nepal were mobilizing all of their resources.
"We have eight mobile health clinic vans scattered in Nepal. We have directed all of them to the disaster areas," Jesuit Father Boniface Tigga, Jesuit provincial of Nepal, told CNS May 4. He said they also had sent out truckloads of supplies.
Good Shepherd Sister Taskila Nicholas told CNS that "the situation in the villages is very bad."
"People have to walk for five and six hours to reach the roads to get food or any help. I am worried about the old and the injured in the mountains. What can they do?" said Sister Nicholas while traveling to Kathmandu to collect relief material for distribution.
"On Sunday, some of our sisters and others walked seven hours to reach relief material to the people in some of the villages," she said.
– – –
For links on how to donate to help earthquake victims: https://cnsblog.wordpress.com/2015/04/27/where-to-give-to-help-nepals-earthquake-victims/.
Copyright © 2023 Catholic News Service, Inc. All rights reserved. Linking is encouraged, but republishing or redistributing, including by framing or similar means, without the publisher's prior written permission is prohibited.