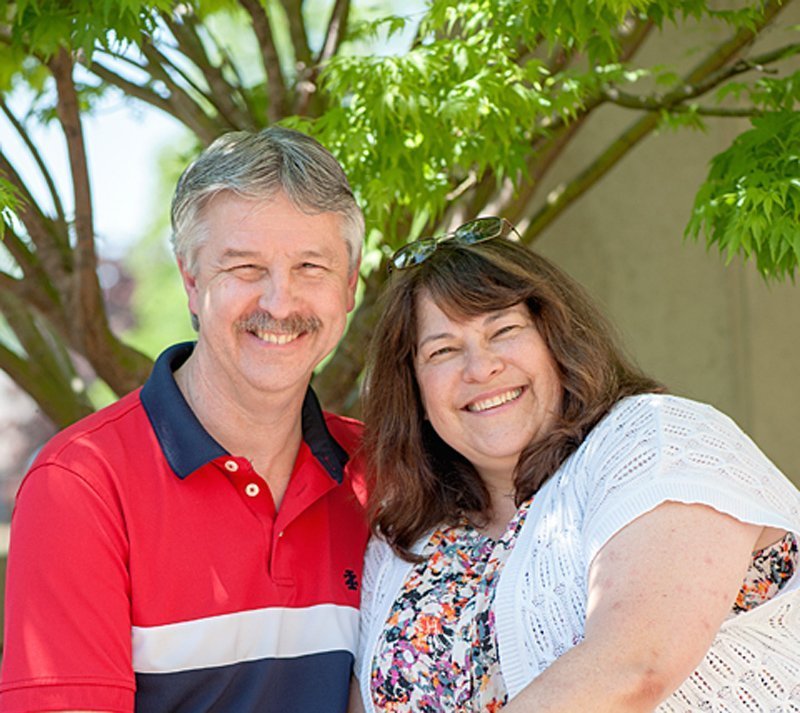 A decade or so, Rob and Beth Knopf didn’t think their marriage was in serious trouble — but neither was it in a place they desired.

“Life was chaotic, and Rob and I would agree that we didn’t make the transition from being a young married couple to being married with kids as smoothly as we had envisioned,” said Beth, who with her husband of 26 years has three children ages 18, 21 and 24. “We were pretty distant, confused, discouraged — and tired.”

Rob, meanwhile, recalled that he was wondering what had become of the person with whom he’d fallen in love.

“I had lost sight of her among all the activities that were going on, and didn’t know how to find her,” he said.

The couple’s dilemma rendered them solid candidates for a Worldwide Marriage Encounter weekend, which Beth said gave them a needed boost in moving from superficial conversation toward regular, intimate communication — “sharing and accepting the deep feelings we have.”

“It was really transformative for us,” Rob said of the couple’s first Worldwide Marriage Encounter weekend.

The Knopfs, who belong to St. Benedict Parish in Canandaigua and East Bloomfield, have remained active with Worldwide Marriage Encounter and currently serve as leaders for the western New York area, comprising the dioceses of Rochester, Buffalo and Syracuse. That region offers two Marriage Encounter weekends per year; more are added if needed. The most recent weekend took place April 22-24 at Notre Dame Retreat House in Canandaigua, with 16 couples attending, and the next is scheduled for Nov. 18-20, also at Notre Dame.

Worldwide Marriage Encounter originated in Spain and has operated in the United States for nearly 50 years, offering couples the opportunity to get away by themselves and reconnect in a spiritual setting. It is Catholic in origin and program content, but open to other denominations as well.

A Worldwide Marriage Encounter weekend typically involves three presenting couples and a priest. Their talks promote self-examination both individually and as couples, with a goal of developing stronger marital connections in such areas as listening, reaching out, trust and spirituality. Spiritual components of a Worldwide Marriage Encounter weekend include Mass on Saturday morning and Sunday afternoon, as well as the availability of confession and personal discussion with the staffing priest. In addition, couples are invited to renew their wedding vows during the closing Mass.

The Knopfs noted that presentations tend to be deep and personal, often striking a strong chord with participating couples and spurring them to open up to each other. They do so by retreating to their private rooms for written and oral dialogue, with presenting couples available to assist those who have trouble getting started. Beth Knopf acknowledged that it requires a leap of faith for many couples to begin sharing openly on such potentially sensitive topics as sex and managing finances. But she and her husband reaped significant rewards from taking that leap at their first Worldwide Marriage Encounter weekend.

“We realized that we still loved each other in a very deep way,” she said. “Knowing that was still there was just such a huge relief; we found it was like the beginning of a huge healing process.”

Rob Knopf said that the odds of positive results from a Worldwide Marriage Encounter weekend are highest for “any couple that’s committed to making that relationship better and including God in the weekend.” He cautioned, however, that couples dealing with “really severe issues” such as infidelity and addiction should instead pursue another Catholic-based program, Retrouvaille (see the related story on page B5).

Many couples who have attended past Worldwide Marriage Encounter weekends continue to participate in sharing groups that meet several times during the year and are usually divided up by region. Couples also are encouraged to engage in daily dialogue with each other as a continuation of techniques introduced at the weekend.

“Their homework is, do this for the rest of your life,” Rob remarked.

Out of that work can emerge a relationship marked by enhanced communication, an increased ability to handle life’s ups and downs, a renewed sense of commitment and a reignited romance.