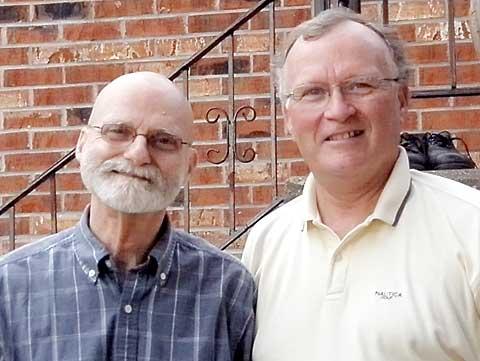 Tim and Joe Weider are the grandsons of Theresa Weider, who was a personal friend of Catholic Worker movement founder Dorothy Day and one of the founders of St. Joseph’s House of Hospitality in Rochester. Writing in Theresa Weider’s obituary, published in the July-August 1952 issue of the Catholic Worker newspaper, Day observed: "Many were the sick and despairing she took into her home and her example led others to do the same, and she nursed them back to health — mental cases, drunks, the sinful as well as the sick."

For more than 40 years, Tim and Joe Weider have carried on their grandmother’s example in their faith, their lives and in their professional work.

Tim Weider was ordained a priest of the Diocese of Rochester by Bishop James E. Kearney on June 5, 1965. He eventually left the priesthood, but still continued on in other human-services ministries. In 1968, he founded Project R.E.A.C.H. (Rural Education and Cultural Horizons) at Sacred Heart Parish in Perkinsville. R.E.A.C.H. was a driving force in the development of three important ministries: Tri-County Family Healthcare (Steuben, Livingston and Alleghany counties), Steuben Church People Against Poverty and the Migrant Education Center at SUNY Geneseo. In 1971, Tim Weider founded Kennedy House, a group home for boys in Perkinsville.

After serving three years in the Navy, Joe Weider joined his brother at Kennedy House, becoming its director in 1975. In 1977, Joe Weider founded Kinship Group House Program Inc. The name of the organization was later changed to Kinship Family and Youth Services Inc. In his role as executive director of the organization Joe Weider has been responsible for its significant growth.

S.H.A.P.E. (Supportive Home and Parent Enrichment Program), the first intensive in-home family-preservation program in Steuben and surrounding counties, was established through Kinship in 1982. Since 1995, Kinship has contracted with the Institute for Human Services to administer the Healthy Families Steuben program, a preventative parent-education program. Through Joe Weider’s leadership, the agency also opened an alcoholism community residence in Bath and shortly after a related supportive-housing program.

Today, Kinship serves more than 2,000 people in six counties, employs more than 40 individuals and has an annual operating budget in excess of $3 million. Joe Weider has announced his retirement effective Jan. 14, 2011, the 40th anniversary of his first day at Kennedy House.