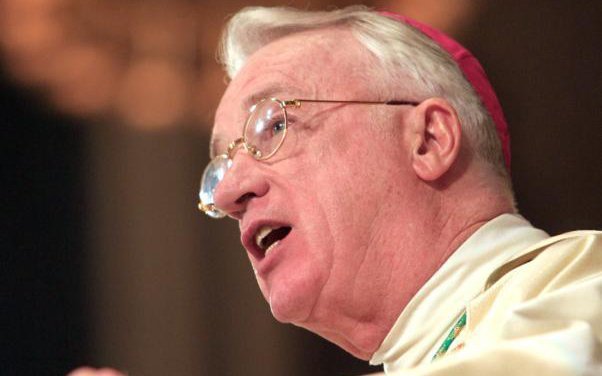 In this 2009 file photo, Bishop Michael J. Bransfield, then head of the Diocese of Wheeling-Charleston, W.Va., is seen at the Basilica of the National Shrine of the Immaculate Conception in Washington. (CNS photo by Bob Roller)

CHARLESTON, W.Va. (CNS) — The Diocese of Wheeling-Charleston “strongly and unconditionally” rejects the state attorney general’s assertion that “the diocese is not wholly committed to the protection of children.”

The diocese issued a statement late March 19 in response to an announcement earlier that day that Attorney General Patrick James Morrisey brought a civil suit against the Catholic Diocese of Wheeling-Charleston and its former bishop, Bishop Michael J. Bransfield, citing provisions of the West Virginia Consumer Credit and Protection Act.

The filing says that based on its investigation, the state attorney general’s office claims that the diocese and Bishop Bransfield in past years violated the consumer law by failing “to disclose to consumers of its educational and recreational services that it employed priests and laity who have sexually abused children.”

The suit defines “educational and recreational services” as the Catholic schools, summer camps and other entities in the statewide diocese.

The diocese said it “will address the litigation in the appropriate forum” but emphasized that the complaint “is based in part on information included in (its) November 2018 public disclosure of clergy credibly accused of child sexual abuse and on other information provided by the diocese to the attorney general over the past five months.”

“The November disclosure by the diocese contains details concerning both the dates of the alleged occurrences and the dates they were actually reported to the diocese, which in many cases were decades late,” the statement added. “Further, some of the allegations of misconduct contained in the attorney general’s complaint occurred more than 50 years ago and some are not accurately described.”

The Diocese of Wheeling-Charleston said its commitment to protecting children is “reflected in its rigorous Safe Environment Program, the foundation of which is a zero tolerance policy for any cleric, employee or volunteer credibly accused of abuse.”

The program includes mandatory screening, background checks, and training for all employees and volunteers who work with children, it said.

Archbishop William E. Lori of Baltimore has been apostolic administrator of the diocese since Sept. 13, 2018. The Vatican named him to the post the same day it announced the retirement of Bishop Bransfield as head of the diocese.

The Vatican gave Archbishop Lori a mandate to investigate allegations of sexual harassment of adults and financial improprieties made against Bishop Bransfield.

On March 11, Archbishop Lori announced that a preliminary investigation into the allegations had been completed and the findings were being forwarded to the Vatican for final judgment. At the same time, the archbishop announced restrictions on the bishop’s ministry.

A news release from the Archdiocese of Baltimore March 11 noted that the preliminary investigation took place over five months. Archbishop Lori conducted the investigation with the assistance of a team of five lay experts.

The investigative team examined multiple allegations of sexual harassment of adults and financial improprieties, according to the news release. It involved interviews with more than 40 individuals, including Bishop Bransfield.