What do we know about the Magi? - Catholic Courier 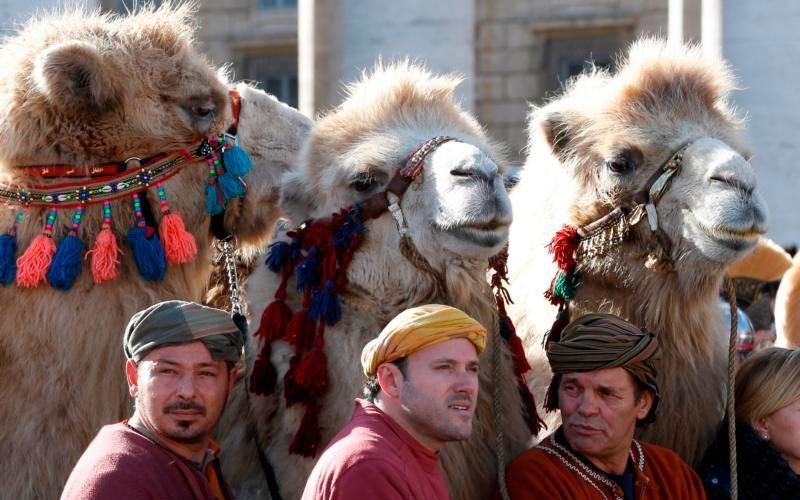 Three camels stand behind men in traditional attire in St. Peter's Square as Pope Francis leads the Angelus on the feast of the Epiphany at the Vatican. Many scholars believe that the Magi were priests of the Persian religion, men of high stature but definitely not kings, part of the account piously augmented in later centuries. (CNS photo by Paul Haring)

The arrival of the Magi may be the most famous part of Matthew’s infancy narrative.

What are some little-known elements in both scriptural and traditional accounts of the Magi?

They were three kings, right? Not so. Matthew says only “Magi,” but since they brought three gifts, many Christians thought that meant there were three of them. Magi were priests of the Persian religion, so they were men of high stature but definitely not kings, part of the account piously augmented in later centuries.

That the Magi’s mission was ordained by God was proved by the divine warning about Herod, the Roman-appointed king of the Jews, who had told the Magi to let him know where this newborn king could be found. God sent them a dream about going home another way, the divine dream being further proof of the authenticity of their mission.

What follows is well-known — the massacre of the innocents by Herod, from which Jesus escapes as his parents fled to Egypt. This foreshadows another innocent death, Jesus’ crucifixion. The Magi were pagan gentiles who hoped to save Jesus. At his crucifixion, says Matthew, the only person who tried to save Jesus was Pilate’s wife, another gentile and pagan.

Matthew’s infancy account ends with the Holy Family going from Egypt to the Holy Land, just as Moses had done, an important link for Jewish converts, such as the apostle Paul.

The “Christmas” Gospels are complicated texts that had great meaning for the first believers. Ancient Christians were fascinated by Jesus’ birth. (And not just the ancients — consider the difference among modern believers of the celebration of Christmas and any other holy day.)

We see the Gospels inspired by God and thus untouchable, but that was not the view of early Christians.

The extra-scriptural additions came early. For example, all Christian writers believed that the Hebrew prophet Isaiah had forecast the coming of Jesus. The prophet had said that the ox knows its master and the donkey its master’s manger. Early church fathers applied this prophetic passage to the infancy account, and the now the stable had a donkey and an ox.

Yet Isaiah had more to add. He referred to camels bringing gold and frankincense to the Messiah. These gifts, to which myrrh was added, became the official gifts of the Magi. Myrrh was mostly used in funeral services, so it pointed to Jesus’ death and linked it to his birth, something the Gospels writers had also done.

No generation of Christians has ever been satisfied with the Gospel infancy narratives. Early Christians did not set out to “improve,” but rather to fill in the missing details. This may annoy or disappoint some people, but these were good, sincere believers who simply wanted to know more about Jesus’ birth.

Is it somehow wrong to use material from these later writers, for example, should we not sing “We Three Kings” since the Gospels do not say “kings” or “three”? By all means, we should sing that song and others like it.

Maybe a parallel would help. The New Testament does not describe Jesus or his mother’s physical appearance, yet we have statues and images of them in our churches, and no one thinks that is inappropriate.

So, please read the Gospel infancy narratives, but let us also appreciate the faith and piety of the early believers who just wanted to know more about Jesus’ birth.